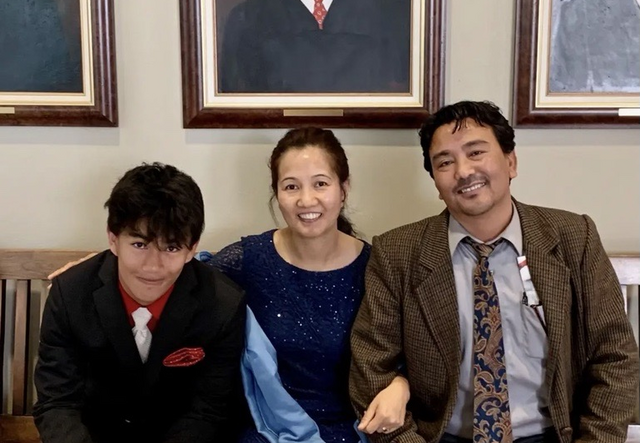 From the hillsides of Nepal, Sangam grew up surrounded by a generous and brave community who always helped their friends and family. One could say, this exposure drew him to the field of social work.

Sangam began his professional journey working for a company who offered a software called, Job Access With Speech (JAWS), that helped the visually impaired. He offered web trainings on how to successfully use their screen reader. “I got the chance to do the training for JAWS. This is for the blind and JAWS is the software.  I was working with them for 2 years – It was really very good opportunity [to] work with them,” he shared. Soon after, he shifted his focus to being a social worker with a non-profit organization where he taught cultural music.

About a year later, he started working as a Ticketing Officer for a local travel agency. There, Sangam was responsible for booking international flights for his customers, with the hope to one day live and work in America. During this time, Sangam Thapa had the opportunity to come to the United States with his family through the Diversity Visa Program. “I got the opportunity to fill out the Diversity Visa, it was a lottery form and I tried it and I got it! And especially, it is good for me that I can move with my family into [the] USA – this is my dreamland,” he expressed.

Fun Fact: Did You Know?

Sangam enjoys playing the guitar and singing, but he was never formally taught. For a short period of time, while he went to school in Darjeeling, India, where he took a few music classes. He added, “My Biological dad was a musician and so his blood is in me.” Sangam is working on a song about the IRC so stay tuned for that!

Journey to the U.S

Leaving behind his mom, stepfather, brother and three sisters, Sangam and his family made their way to the U.S. “The flight including transit is 26-28 hours - it’s really far!” he said. Once he arrived, he was determined to find a job. He and his wife worked at their local grocery store for a little under a year. Through this experience, Sangam developed strong friendships with some of his co-workers and one of them suggested going to school as a way to integrate and meet new people. He explained, “one of my friends, [who] was from the Philippines, advised me you can go to a school. In America, they can help you with education, so I found that here.”

In order to take adult classes, he had to leave his job at the grocery store and take up a part- time job at a nursing home. With the financial support of the U.S government, his and his wife’s coursework was covered. Sangam was learning a lot, but his daily schedule took a toll on his physical and mental well-being. He shared, “It was hard as I was working the night shift and going to school during the day. There [was] no time to rest. The job was in dietary aid, but my co-workers were helpful and encouraging.” 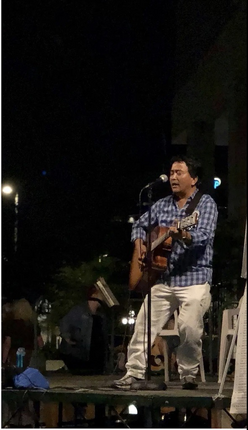 Sangam performing a song with his guitar in front of audience.
Photo: Sangam Thapa, IRC

After completing his coursework, he began volunteering at the El Rio Hospital, but due to the long commute, he transferred to the Northwest Hospital. He shared, “It was a volunteer job not a paid job, but it was very far and I didn’t have a car at that time – I used to go by bus.” At Northwest Hospital, Sangam completed over 150 volunteer hours that went towards his certification as a Medical Office Specialist. While he enjoyed his time there, he was looking for paid opportunities in order to continue to support his family and build a stable life in the U.S.

Making friends in a new country was difficult, but Sangam made a lot of efforts to do so. It was one of the main reasons he worked to improve his English.  There was a church near his apartment at the time that he used to visit. It was at that church where he met Mr. Underhill, who impacted his life tremendously.

Sangam likes to say, “he was the guy who helped me a lot - from, I say, bottom to top - not top to bottom!” They used to play the guitar and sing together in church. Sangam went on to share, “There are many people but only few are understanding and are hard to find, but I found it and he [understood] everything about me.” Out of the kindness of his heart and in honor of their strong friendship, Mr. Underhill gifted Sangam a guitar, which he still has and a car.

A friend of his recommended the IRC. As he recalled, “one of my friends told me [they are] hiring for [a] Nepali interpreter at [the] IRC. They gave me the phone number, I tried and I got the call.” His interviews went well and he was brought on to the team as an interpreter in December of 2017. Sangam worked hard and was learning the ins and outs of the organization while interpreting for many families. The team took notice of his caring nature and ability to connect with clients and they approached him for an opening for a caseworker assistant role. “I did three years as an interpreter – but six months into the role, I started to train as a Caseworker Assistant,” he explained. Once he completed his training, he transitioned to being a Caseworker Assistant.

When it came time to get his citizenship, in 2018, he remembered being very sick, but he studied hard. Both he and his wife were scheduled to take the test where they would have to answer 100 questions about U.S. history. He was not sure if it was because of his nerves or if it was because he was sick, but he remembered not being able to answer some of the easier questions correctly. “I was sick and I did everything good but very easy questions, I missed it,” he said.  She asked, “who is the Vice President,” and I thought she was asking for the President’s name and I said, “Donald Trump!” Before he received his certification, he asked his dear friend, Mr. Underhill, if he could use his last name as his middle name – Mr. Underhill was honored. “When I was taking the citizen certificates, they announced, “Sangam Underhill Thapa!” And [Mr. Underhill] was there,” he shared.

Sangam was recently promoted to be a Refugee Support Services (RSS) Case Manager, and he credits his strong foundation to his time as an Assistant Caseworker, where he supported and welcomed clients from the moment they entered the country. He was responsible for airport pickups, orientations at the airport and in the apartment, grocery shopping and setting up apartments. “I have to go buy everything [the client(s)] needs for the kitchen, bathroom, bedroom, dining room – everything. So when they come it looks like [a] hotel room,” he described. “When I set up the apartment, [it should] be clean, tidy and when [they] get in [they should] feel happy and smile - that is our goal,” he added. To ensure quality services, the Case Manager will follow up with the family’s to make sure everything was done with proper care and attention.

While there is some overlap with his current role, Sangam now works with families who may need some additional support with finding a job, with financial needs, etc…. Sometimes case files need to be re-opened depending on the circumstances. As an example he shared a funny story about a client interaction.

I said, “oh my god, something happened to him, maybe there is a problem. Why are you back here?”

The client said, “It is so cold there!” And just like that, the client’s case was reopened.

A Community Away from Home

Even after all the long hours and late nights, Sangam sees his responsibility as putting his clients first - that’s what keeps him going. He also feels and appreciates the support of his co-workers who lookout for him and each other. He shared with a laugh, “I am alive, everyone takes care of me. If someone says a good word for me, that is good food for me. Happiness is food, right?”  Sangam is grateful to have found a generous community within the IRC whose mission it is to support and resettle refugees. He wakes up each morning excited to go to work where anyone who is willing to put in the hard work is welcome. What has helped him succeed in his role is the supportive atmosphere in which he works.  “I like the friendly environment, we can learn very fast like that. It’s a much happier environment. I can say anything with friends,” he shared. 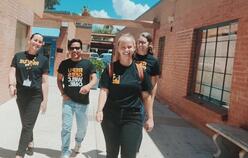 Sangam at the office with some of his co-workers.
Photo: Sangam Thapa, IRC

The IRC is made up of staff from different backgrounds and walks of life. Sangam and his family showcased their bravery and strength when they came to the U.S.  “Braveness is the Nepalese trait. You can see Nepalese people called Bahadur. You can call me Sangam Underhill Bahadur Thapa!” he said with a huge smile. In fact, he learned as a child about a Nepali guard, who stood in front of Queen Victoria’s palace, and gained her respect for Nepali people. “Queen Victoria, in London, a long time ago was heading out from the palace and there was a meeting in the palace so they informed the guard to not let anybody come inside, we have a meeting.” The Nepali guard received this command and when, “Queen Victoria came back, the guard didn’t let her go in…she was stopped at the gate. [Only] when the meeting ended he let her in,” he explained with pride.

So, what’s next for Sangam? Well, as he settles into his new role, he has also been writing a song about the IRC and hopes to record it soon!  Thank you, Sangam Underhill Bahadur Thapa for your amazing contributions, for your unwavering support of our clients, and for sharing your story. We are thrilled to have you on our team!