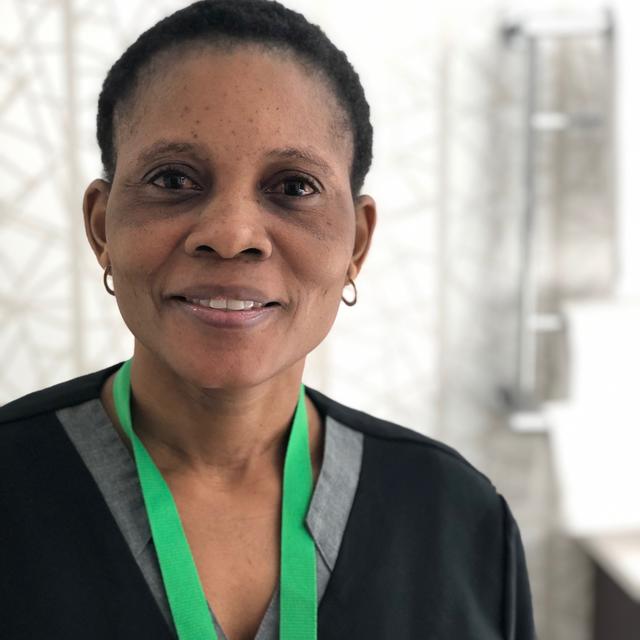 Hotel housekeeping is physically demanding work with a high rate of turnover, which had been a chronic problem for the Holiday Inn Downtown in Missoula. It is also an essential service. When Holiday Inn was approached by IRC at the end of the summer of 2016 they agreed to hire a small number of refugees to start out with. Justine Binwa was part of the first group of refugees. Justine had spent the last twenty- one years in refugee camps in Tanzania and was eager to start working in the United States. Starting work so early after arrival left her little time to learn English and she worried that this would hold her back from advancing. She needn’t have worried. “She cleaned a perfect room right from the beginning” says Jaz Frost, Housekeeping Supervisor at the Holiday Inn. Not only was she a hard, dedicated worker Justine also emerged as a natural leader whom Jaz referred to as the “Mama Bear”, bringing up concerns or questions from the other housekeepers. Justine and Jaz worked through the language barrier in the early months with the help of volunteer tutors who came to the Holiday Inn as the tourist season slowed down and there were fewer rooms to clean.

This winter the Holiday Inn found themselves in need of a room inspector and trainer and quickly thought of Justine. The tourist season was fast approaching and several more Congolese refugees had been hired and Jaz and Bob-Be Sparks, Executive Housekeeper, knew Justine was ready for the next step up. Bob-Be worked with the IRC Employment Specialist and IRC interpreter to sort out the details and responsibilities of Justine’s role with her. Since her promotion Justine has thrived in her new role. She has trained four Congolese refugees as housekeepers and inspects each room before guests arrive. Justine is leading by example and showing other refugees their hard work is recognized and advancement is possible. Congratulations Justine!

We here at IRC are so grateful to the Holiday Inn, particularly Bob-Be and Jaz, for being an outstanding employer and for seeing the potential in everyone.