On August 29th, 11 community members, including former refugees and New Americans, came together for the International Rescue Committee (IRC) in Salt Lake City’s first-ever New American Voices Advocacy 101 training. New American Voices, a new initiative in Salt Lake City as part of the IRC’s national Refugee Voices project, is designed to create a platform for former refugees and new Americans, empowering them to advocate, tell their stories, and mobilize their communities to promote civic engagement.

Natalie El-Deiry, executive director of the IRC in Salt Lake City, kicked off the evening by welcoming the group to the training, describing the importance of learning to advocate and raise your voice to engage: “All of you have come to this country—whether you are an asylum grantee, or refugee, or another type of immigrant—to build a new life for yourselves and one of the big things around that is to gain control of your future and to use your voice to help other people just like you. That’s why this training is really important. Our focus is going to be on advocacy—how we make change with the people who are in power in our state…by telling them that we’re part of this community too, and we need to make sure our voice is heard.” 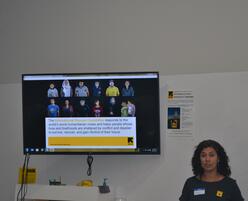 “[Through our] initiative, New American Voices, we are going to work really hard to help elevate the New American Voices in this community. There is already beautiful work happening in the community around raising voices and showing the faces of the people that we work with and the people that make up our community.” --Natalie El-Deiry, executive director.
Photo: Maggie McCormick/IRC

The first training, led by Pamela Silberman, the IRC in Salt Lake City’s resident “advocacy expert,” focused on educating new Americans on what advocacy means, why raising your voice and taking action makes a difference, and what each individual can do to become an advocate.

“What we’re planning to do tonight,” Pamela explained to the group, “is give you the tools and the knowledge to make your voices heard.” Participants then practiced different forms of advocacy by writing postcards to their members of Congress and practiced calling and speaking to their representative’s office over the phone.

Tatjana Andrews, administrative coordinator at the IRC in Salt Lake City and a member of Refugee Voices, shared her experience as a former refugee and her process for learning how to advocate for refugee resettlement:

“In May, I was able to go to Washington, DC. I was able to share my story and talk to congressional staff members about refugee policies and why they matter to me. One fact that I learned that I keep pushing now is that when my family was resettled in 1997 we were four of 77,000 refugees admitted to the United States that year. As some of you know in 2018 that number was 22,000…That’s a really big reason why I want to advocate for people that are trying to make the United States a safe haven for [refugees]—seeking safety—just like my family was. If my family was trying to be resettled at this time, I have no idea if we would have ever come to the United States or if I would have had the same opportunities. So, if I don’t use my voice, who will?”

This training was the first of a series of events planned for the New American Voices initiative. The purpose of the initiative is to engage new American voices in the community and to identify the real needs of these community by conducting listening sessions to discuss barriers to civic engagement and voter education. Once the needs are identified, the IRC in Salt Lake City will provide outreach to existing services and conduct workshops to support New Americans who are filling out the U.S. census for the first time, helping people understand how to register to vote, and empowering communities to mobilize to get out to vote during the 2020 elections and more.

New American Voices is an initiative created to engage all current and former refugees, immigrants, SIV recipients, asylees, and all other people who have been displaced, regardless of how they arrived in the United States or what agency helped them to resettle. We welcome anyone interested in joining the initiative or supporting our efforts to email us at [email protected].