Forced to flee ongoing violence and conflict in the Democratic Republic of Congo, Gedeon, his wife, and their two young children became refugees. For 15 years, 6 months, 3 weeks, and 4 days they lived in Rwanda, until the day when they were finally selected and approved to come to the United States through the refugee resettlement program. 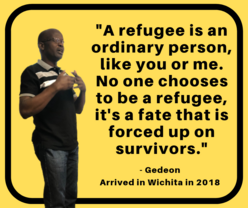 Despite record numbers of displaced individuals, the number of resettlement slots available around the world was reduced by half between 2016 and 2017. The Trump Administration drastically cut the US refugee admissions ceiling from 110,000 down to 45,000, and then to 30,000 for the 2019 fiscal year. This year the IRC in Wichita has welcomed more than 220 refugees, including Gedeon and his family, but this is far fewer than the more than 350 refugees who were resettled just a few years ago.

In Rwanda, the family was physically secure, but life was not easy. Because of his training as an English teacher, Gedeon secured work teaching in local schools, sometimes multiple, to provide income to cover housing and food. Basic necessities such as health insurance were unavailable to refugees and asylees. Still, the family counted themselves as some of the lucky ones. While in Rwanda, Gedeon attended school to complete his Master’s degree in Public Health and he and his wife had two more children, but the family wanted more than to just survive. They wanted to live.

The family then applied for refugee status with the UNHCR. At the end of 2016, all of their paperwork was complete and submitted, but the incoming Trump administration was about to drastically reduce the number of refugees allowed into the United States. From late 2016 until November 2018, Gedeon and his family heard nothing about their case—no updates, no communication. Finally in early November 2018, the family was told that they would be relocated to Wichita. Gedeon had no idea where Wichita was, let alone how to pronounce the name of his new home. Only 10 days after he first heard of Wichita, the family boarded a plane to the United States and landed in their new city.

Within a few months of arrival, both Gedeon and his wife were working at a meatpacking plant and providing for their family. Their four children were enrolled in school and had begun to thrive in their new community. But Gedeon did not stop there. In May 2019, he was selected to participate in the Refugee Voices National Convention in Washington, DC, the only refugee from Kansas to share his story to Senators and Representatives on the Hill. He not only advocated for Congolese refugees, but also for refugees around the world. Soon after his return to Wichita, Gedeon began taking driving lessons with an IRC volunteer, building the skills he needed to pass a driving test. Just recently, the family was able to purchase a car of their own, increasing their ability to get around the community. 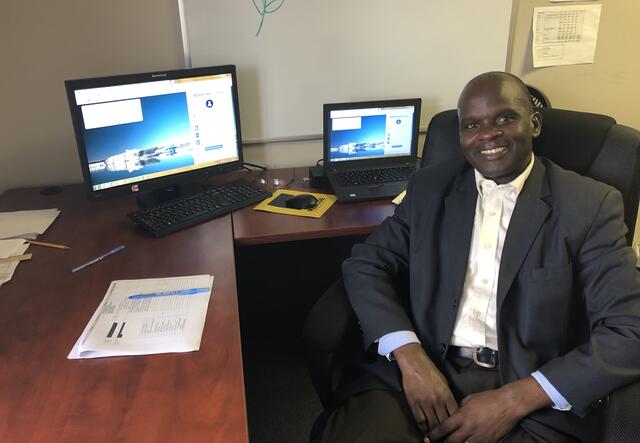 Gedeon in his office at the IRC in Wichita.
Photo: Megan Webb/IRC

In August, Gedeon joined the team at the IRC as a Casework Assistant, where he gets to help other new refugees build employment skills, review resumes, and get oriented to life in Wichita. Every day he expresses his gratitude that he is able to be a part of Wichita and everything this community has given his family.