After years of upheaval and uncertainty, refugee & immigrant girls in the United States are ready to explore their path in life. The Vision Project supports these young women to envision their future and redefine what their communities and they themselves thought possible. Run by the IRC previously in the Democratic Republic of the Congo and Jordan, the IRC in Northern California piloted the program in the United States over April's spring break in Oakland.

Participants work with female mentors from the community to explore their aspirations, design visions for their future, and challenge social norms. At the culmination of the workshop, girls design and direct a photoshoot in which they embody their future selves achieving a career-related goal.

Fourteen girls participated in the five-day program. They represented eight countries – from Afghanistan to Guatemala, spoke five different languages, and ranged from 11 to 18 years old. Despite these differences, they astounded the facilitators with their capacity to build meaningful friendships, and help one another visualize ambitious futures. Hilary from Guatemala and Bayan from Syria connected over the people and possessions they left behind in their home countries, and we witnessed Say Say from Thailand gushingly compliment Samar from Sudan (“You are so good! So great! So cute!”) after Samar made a spectacular save during a lunchtime soccer game. 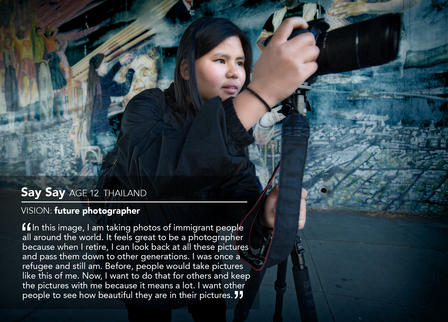 The week began with activities to help the girls center themselves and their story, and get to know the other participants through collaborative games and exercises. The girls reflected on the stereotypes and norms they encounter in their own lives, and how these stereotypes influence self-perception and visions of their future. They were given the space to imagine and share their future goals, and learned how to lay out the steps necessary to achieve them.

The girls also heard directly from female mentors in the community, who visited the workshop to share their own experiences as architects, musicians, lawyers, software engineers, and more. Seventeen professional women acted as mentors, some inspiring future goals in the girls they had never considered. After meeting with an architect, Paw Si from Thailand discovered a new dream: “I never thought I would have something like this,” she said. “I love my future job.”

Through mentorship and discussion, the girls were inspired to develop a vision for their own futures, and by the end of the workshop week had chosen a career goal. The culminating Vision Not Victim photo shoots were directed by the girl herself and hosted by mentors in the same or similar fields. Future doctors were captured Kaiser Hospital, where they received a behind-the-scenes tour, donned scrubs, and explored an operating room. Other girls got to visit AirBnb, Salesforce, a recording studio, the Oakland City Council chambers, and a local architecture firm. Through these enactments, girls became the protagonists of their own life stories. 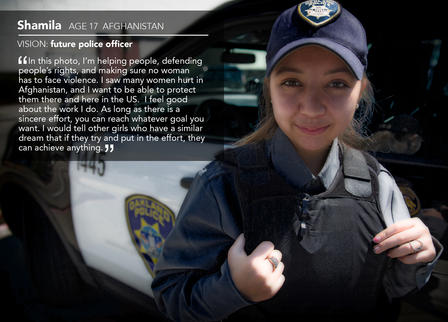 Vision Not Victim is unique in that is enables girls to see their potential, and the girls lit up when they saw the printed photographs of themselves and doctors, and lawyers, and architects. “When people see this photo,” said Sheily from Guatemala of her portrait as a surgeon, “I want them to think, ‘I want to be like her.’ I would want them to know that it was not an easy path, but that they could follow me as an example.” Parents, too, were often overwhelmed by the powerful images, and expressed pride in seeing their daughters as empowered young women. “I am proud of her,” Sheily’s mother shared, wiping away tears, “Here, they will be able to have a better future and follow their dreams.”

Even during the one-week pilot, Vision Not Victim had a powerful impact on girls’ self-perceptions, and the IRC plans to run the program again in Oakland this upcoming winter break in January. Learning from the pilot, The Vision Project will continue to integrate community mentors and will engage another group of incredible young refugee women. As future human rights lawyer Bayan from Syria asserted, “Girls can do anything. We are not a problem in this world, we are the power of it.”

For more information or to support this program financially, as a mentor, or with in-kind donations, please email Vision.Project [at] rescue.org.