Highlights from the IRC's Rescue Dinner 2017

The IRC presented our Freedom Award at the event to philanthropist and former New York mayor Michael Bloomberg for his efforts to pioneer change on a global scale in the areas of public health, arts and culture, the environment, education, and government innovation.

Thank you @BloombergDotOrg@MikeBloomberg for the generous support at this critical time. An honor. https://t.co/RSYuCZmwpD

Through his foundation Bloomberg Philanthropies, Bloomberg announced a gift of $10 million at the event. “I’m proud to say America has always opened its arms to the most vulnerable, and given them a chance to start anew,” he said. “In return, they have given us back so much."

Our support for @TheIRC will help continue the organization’s lifesaving humanitarian work around the world. https://t.co/1SQE8cQuZzpic.twitter.com/l8rG6W1uOS

The IRC also honored actress, director and IRC Overseer Liv Ullmann with the John C. Whitehead Humanitarian Award for her compassionate advocacy on behalf of refugees. In her acceptance speech, Ullmann reflected on her ancestors who were refugees, driven from their homes in Oslo during World War II after her grandfather was targeted for helping Jewish families escape danger in their own country.

"By the time tonight's #RescueDinner has ended 4,300 ppl will be forced to flee their homes." Liv Ullman, our humanitarian award recipient. pic.twitter.com/0U47JxENxP

“I never got to meet my grandfather, but he inspired me anyway by his model choice not to sit still,” Ullmann said. “I am deeply grateful to the IRC for showing us a path forward into the future where all can be – and where no one can come up to another and say, ‘You do not belong.’”

"The humanity of each and everyone of us depends on the dignity of each of us." @DMiliband Tonight at our annual #RescueDinnerpic.twitter.com/43nw8rGUZL

Two refugees who were assisted by the IRC shared their stories, including Rooha Hagar from Iran, who resettled in Texas with her family.

"I have a future & it looks bright." Resettled refugee Rooha Hagar, who interned at IRC Dallas, & whose parents bought a home. #RescueDinnerpic.twitter.com/gk9zQGeSov

And @KNAAN lyrics for Fatima and Waving Flag all the more poignant when sung for @theIRCpic.twitter.com/d2rXsIbOYh 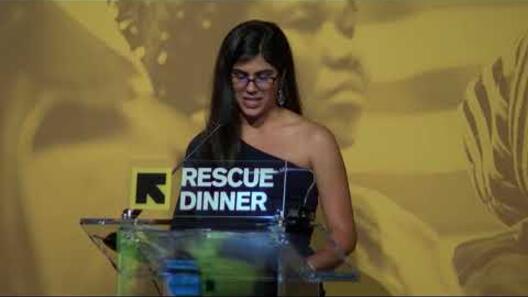