How can we support refugees from Ukraine in the coming months?

April 14, 2022
Photo: Francesco Pistilli for the IRC
At a glance
At a glance
Donate to support our work

Weeks before the conflict in Ukraine began, the International Rescue Committee (IRC) had a team on the ground in neighboring Poland ready to respond to the crisis if we were needed.

Even without a clear picture of how events would unfold, the IRC began to prepare, assessing possible scenarios and identifying how the organization could help as many people as possible. Soon after the conflict began, we also started working with partners inside Ukraine who were helping people displaced by the fighting.

Heather Macey led the IRC's initial response in Poland, as more than 3 million refugees—most of them women and children–fled Ukraine for the country. With some displaced for over a month, many refugees are now focusing on how they can create some semblance of normalcy—finding a job and enrolling their kids in school even as they hope to soon return home.

Below, Macey discusses what happens in the weeks and months after refugees are forced to flee and how the IRC is working with governments and local partners to help. 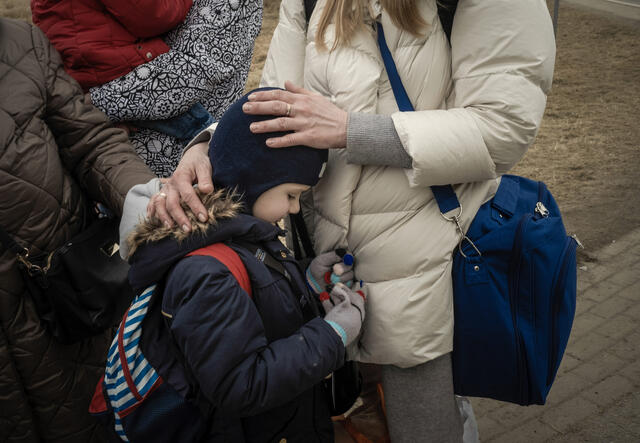 What do refugees from Ukraine need after they’ve arrived in Poland?

The IRC just finished a needs assessment to look at where we would be most useful in the next phase of the response, interviewing 520 people who had fled the conflict. Ninety-three percent of the respondents were women.

The number one thing people said they needed was a job. They also said shelter was a top concern and they need access to cash, they need to support themselves. Education was also a major need, with many families wanting their children to continue remote learning.

The number one thing people said they needed was a job.

The majority of the first wave of refugees coming in had resources and contacts in Poland and neighboring countries and so they were absorbed into the local communities. Many of the people coming now don’t have those resources or contacts.

One other clear need is around protection, as people arriving in a new country with a limited support network are vulnerable to exploitation and abuse.

What are the specific needs of children who have had to flee?

The needs of the children are huge. Same with the mothers. I have two kids; I can't imagine what it would be like to leave my family behind and travel by myself with young kids to another country.

And what these children have seen…The first refugees that came across just as the fighting was starting, many of them luckily hadn't witnessed very much violence. But the children coming across now have been living in bunkers. They've been in their houses while their villages were bombed. They've seen horrible things. They’re traumatized.

It may not show right away. But then you go to a [refugee] reception center and there’s silence. The children are not playing. That’s not normal. 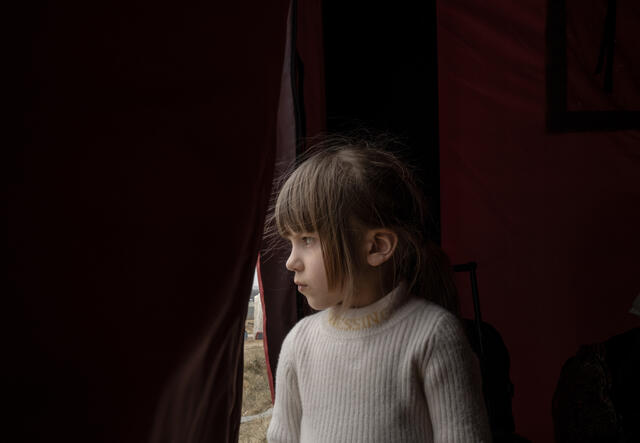 "It may not show right away," says Heather Macey. "But then you go to a [refugee] reception center and there’s silence. The children are not playing. That’s not normal."
Photo: Francesco Pistilli for the IRC

We’re working with local partners and the government to put in place services for children who are traumatized, including what we call Safe Healing and Learning Spaces. These provide a safe, caring and predictable environment where children facing crises can go during the day.

They’ll have a much better prognosis if you can work with them, and support the mothers immediately. If you don’t, it can take months or years for children to work through and process these emotions.

Now that they’ve arrived in Poland, where will refugees from Ukraine go next?

We don't know the exact numbers, but we do know that a number of people have moved through Poland to other countries. Some have contacts, friends or relatives in these other countries, or these countries have offered to host refugees.

These are families that have been divided, with their brothers, their fathers, their uncles, and their husbands still in Ukraine.

This is a different situation than many of the other refugee situations that I've worked in. This is a group of mainly women. These are families that have been divided, with their brothers, their fathers, their uncles, and their husbands still in Ukraine.

So it's really hard for a family, or for a mother here with her children to think about integration. What they really want is to be united as a family and to be safe. People have very much kept their hope alive, their hope that they can go home.

That said, there is an understanding that some sort of integration is necessary. Certainly, women want to have their children enrolled in education. Looking for a job is another key priority but people are balancing that with the hope that they’re going to go home soon.

It's a difficult discussion for people to have in their own heads, let alone to talk to others about it.

How is the IRC helping to address the needs of refugees?

The IRC has the technical expertise to support the local government and partners.  The government here is doing amazing things in terms of getting Ukrainians registered to access services. But the process can be confusing and the services will need support if they are to reach the vast number of people coming. 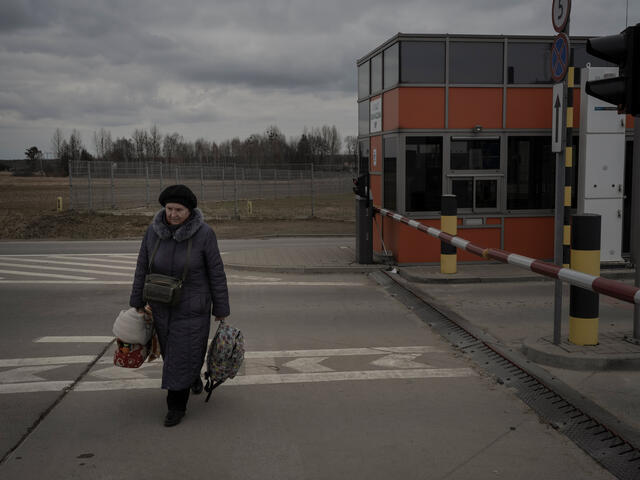 Particularly when it comes to protection and to remote education, we can make sure these services are accessible and sufficient for the task at hand. We’ve also helped with the reception centers the Polish government has set up. These centers need structure, and they need to be able to serve vulnerable populations. For example, we help to ensure there are child safe spaces, including the Safe Healing and Learning Spaces, and trauma counseling for children. We train social workers, and connect people to legal services, counseling and cultural services.

Our material support includes medical supplies for teams operating at refugee reception centers, including the Polish Red Cross. The needs assessment found that almost half of the people the IRC surveyed had a family member with them with current health needs, ranging from physical disabilities to pregnancy.

We’re also helping to address mental health needs by supporting an existing hotline run by one of our partners. They are training Ukrainian women who've arrived across the border to be counselors. That way, people can speak to somebody in their own language who has gone through similar things.

We’re working with a partner who is focused on “third country nationals,” or people who are not Ukrainian but were living in the country and had to flee. They make sure that all barriers to accessing services are removed, and that this population is not forgotten about.

Finally, we will be helping people cover their basic needs by providing direct cash assistance, including over $1.5 million worth of prepaid ATM cards in Poland.

Can you describe why providing direct cash payments to refugees is important?

Cash provides dignity to people. If you're a mother with three children, you know what you need to spend your money on. We don't need to be telling you to buy diapers. If you're an elderly couple, you have other needs. So by giving cash, it supports the local economy and it gives people the opportunity to define their needs for themselves.

How are we helping people still in Ukraine?

With our partners in Ukraine, the IRC is supporting access to basic services such as health care, essential medicines, warm clothes and cash assistance. We work with local partners to support really vulnerable groups–such as women and unaccompanied children–and [partners] who are helping to evacuate people. Together, we help provide critical information to people who need to flee, on housing, refugee rights and other issues. We’re working with four local partners on this response: Right 2 Protection, Vostok-SOS and Women’s Consortium of Ukraine, as well as a partner focused on health care.

Why is it important for the IRC to work with local partners?

There are already a huge number of civil society organizations in Poland, Ukraine and other parts of Europe who are working in protection, refugee resettlement or other areas. Many have deep-rooted relationships among the people they serve.

Our approach allows us to build on those relationships with local partners and strengthen and scale up with them. We don’t want to come with heavy boots on the ground and undermine the existing structures. Our hope is that when we leave, we will have permanently built up the capacity of these local organizations. 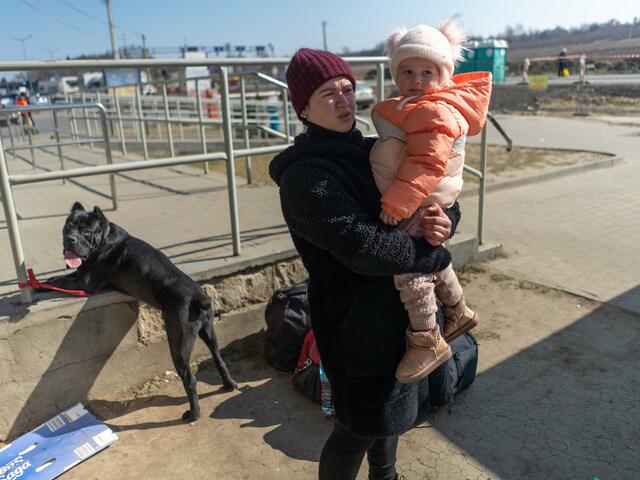 "There was no sense to wait…. It was time to leave," said Maria, who fled Ukraine with her daughter Daryna and dog Tyson. "I was also concerned about my child. I wanted her to stay alive, that no bombs would fall on us."
Photo: Andrew Oberstadt for the IRC

Are there any stories that have really stuck with you?

I met a grandmother who made it to Poland, but then returned to Ukraine.

Her daughter came to Poland first and she was very, very concerned about leaving her mother behind. It took her 72 hours, but she was finally able to get her across the border.

Knowing what is going on back home can be really hard for a family to manage.

Her mother stayed with her for two weeks before she went back. Although the tax office where she works is closed down, she said, “No, I need to go home. My husband is there and my son is there.” She wanted to be there to support them.

There are a lot of people who find that they feel helpless here. Knowing what is going on back home can be really hard for a family to manage.

What else should people who want to help know?

We also need to be aware that there are other things going on. There are crises in Syria, Afghanistan, Ethiopia, Myanmar—just to name a few places. It’s great that people are helping. But we should extend the same level of support and understanding for people affected by conflict all around the world.