The triple threat of conflict, COVID-19 and climate change are dramatically worsening already dire situations around the globe.

Climate change is set to unleash widespread and sustained damage across the world—even if we succeed in limiting global warming.

This is not a problem for future generations to solve. The catastrophic consequences are already here as more frequent and intense natural disasters and extreme weather destroy livelihoods, intensify violent conflict, and force people to flee their homes. The impacts of COVID-19 have only compounded these threats to the lives of millions around the world.

The need for bold and urgent action could not be clearer. Find out what you need to know. 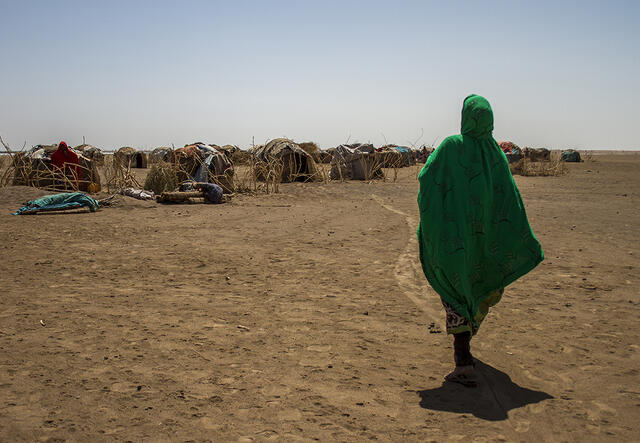 Sada Mohammed, 30, returns to her temporary shelter in a remote village in the drought-affected Somali region of Ethiopia. Sada had been displaced after she lost most of her livestock to a drought.
Photo: IRC

What is climate change?

Scientists estimate that the Earth has already warmed by 2.12 degrees Fahrenheit (1.18 degrees Celsius) since the late 19th century. With the exception of 1998, 19 of the warmest years on record occurred after 2000.

There is overwhelming evidence that this warming is caused by human activity, specifically the increase of greenhouse gases in the atmosphere primarily due to the burning of fossil fuels such as coal, gas and oil. The Intergovernmental Panel on Climate Change (IPCC), composed of thousands of scientists, projects a temperature rise of 2.5 to 10 degrees Fahrenheit over the next century.

How climate change is transforming the planet

Climate, the average temperature and precipitation over time, is distinct from weather, which refers to the day-to-day temperature, precipitation, or events like storms, and is influenced by a number of factors. It is difficult to say one specific weather event, such as a hurricane, is directly caused by climate change. However, scientists do know that global warming makes extreme weather more frequent and more intense. 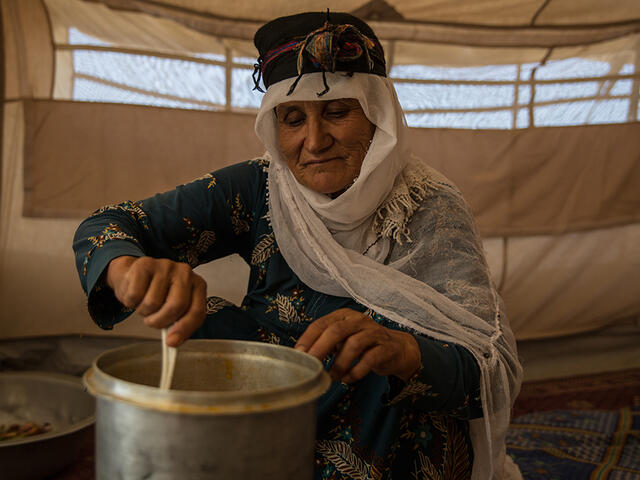 A woman displaced from her home in Afghanistan after a severe drought.
Photo: IRC

Extreme weather encompasses heat waves, droughts, and hurricanes or other “megastorms” that transform communities in the blink of an eye. Extreme weather also contributes to less predictable rainy or dry seasons, the transformation of fertile land into desert (also called desertification) and sea level rise.

“When we talk about greenhouse gas emissions and global warming, it sounds very esoteric,” says Tara Clerkin, a technical specialist supporting agriculture and climate livelihoods programming for the International Rescue Committee (IRC). “But I think in the last few years, we've all started to actually experience and feel in our own lives what those impacts of rising temperatures and increased emissions are. And that is even more true for the places in which the IRC works.”

Just as it is difficult to attribute an individual storm to climate change, a crisis can result from a combination of factors. Conflict increases when a drought causes food shortages, and hunger is worsened by the economic impacts of a pandemic like COVID-19.

Climate change works like this, as extreme weather events combine with already existing conflicts or other crises to make life even more difficult for those grappling with its impacts.

Tara points to the conflict in Syria, which began in 2011 after years of drought. “Was climate change the sole reason for the civil war? No. Was it a contributing factor? Yes.”

Ethiopia is another example. The country relies heavily on agriculture and has a history of drought and flooding, both of which climate change makes more likely.

In 2020, Ethiopia and other East African countries such as Somalia and Kenya endured the COVID-19 pandemic as well as the largest outbreak of locusts in recent history, a phenomenon at least partly attributed to climate change. In Ethiopia alone, over 1 million people have lost crops due to the locusts and 11 million are expected to face crisis levels of food insecurity. Late in the year, a conflict broke out in the country’s Tigray region, further pushing the population toward crisis. 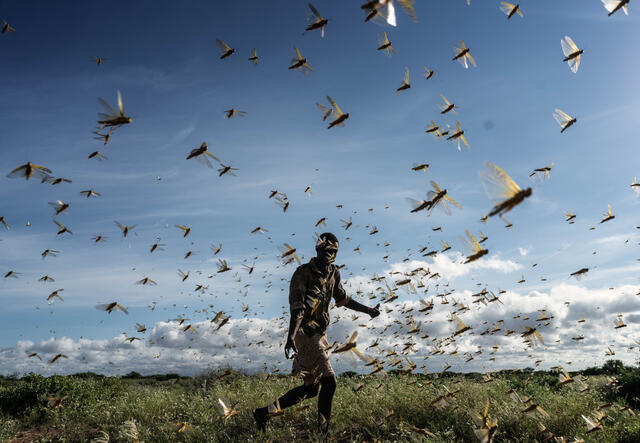 A man chases away a swarm of desert locusts in Samburu County, Kenya. Trillions of locusts are swarming across parts of East Africa, following an earlier infestation in February.
Photo: AP/Getty Images

“What we’re seeing is that multiple once-in-a-generation crises are happening in the same location and in the same year,” says Tara.

Climate change also contributes to poor health outcomes. Rising temperatures and changing rainfall patterns are likely to exacerbate the spread of vector-borne diseases such as dengue and malaria. Lack of access to clean water will lead to higher incidence of diarrhea, a major cause of death for children under 5. Coupled with the destruction of fragile ecosystems, the changing climate has a profound impact on the occurrence of viruses like COVID-19 that emerge from animals.

As the Earth warms, people move

Farmers “live and die by the rain,” notes Tara, and in many regions rainfall is becoming increasingly erratic, forcing many farmers and herders to move in search of better lands or other work.

As more farmers and other members of the community move, they often congregate in smaller areas where resources become scarce. Conflict becomes more likely, and that violence forces more people to flee their homes.

Tara cites Chad as an example of this cycle. Considered by at least one index the country in the world most vulnerable to climate change, Chad has one of the highest rates of hunger in the world—87 percent of Chad’s mostly rural population lives below the poverty line. It is also home to hundreds of thousands of refugees from neighboring countries. 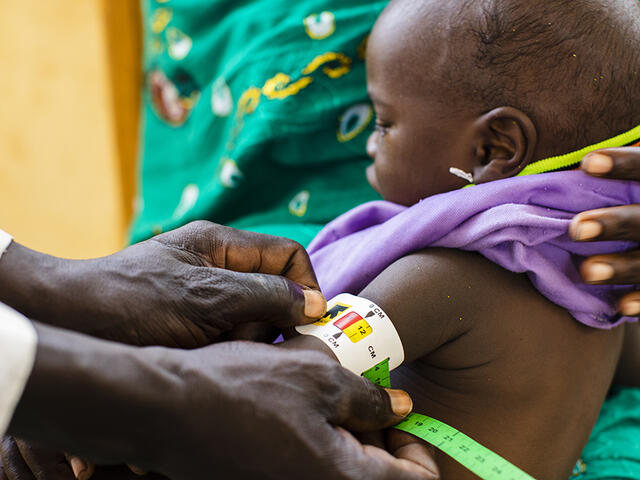 In addition, Chad, alongside its neighbors Niger and Cameroon, faces increasing violence from extremist groups who contribute to the region’s insecurity.

“You have more people trying to earn a living from less land that is less fertile,” says Tara. “And then that just drives more conflict again.”

Climate change is also contributing to crises that are driving people in Central America from their homes. When hurricanes Eta and Iota slammed northern Central America within weeks of one another in November of 2020, they worsened the situation in El Salvador, Guatemala, Honduras and other countries that were already plagued by gang violence and extreme poverty.

"The hurricanes were ... the last in the series of what was a devastating year," said Meghan Lopez, vice president of the IRC’s programs in Latin America, during an interview with CNN. "To have the pandemic on top of that, to have aid to the region cut, all of these things create this pressure cooker where there's no escape valve. And the only escape valve is to try to flee the terrible situation people are living in ... People are making desperate decisions."

A University of Notre Dame index recently ranked the top 10 countries most vulnerable to a warming climate; seven were also included in the IRC’s 2021 Emergency Watchlist featuring the countries most likely to face humanitarian crises in 2021. All ten countries are experiencing armed conflict.

Afghanistan is one of those countries. While the central Asian nation grapples with instability and a decades-long humanitarian crisis, it is also facing extreme drought. Around 634,800 people had been internally displaced as of September of 2021, a number likely to increase as the drought combines with COVID-19 and conflict to make the already volatile situation worse.

Unequal impacts are felt within countries, too. Whenever a crisis strikes, women and girls suffer disproportionately, and climate-related crises are no exception. 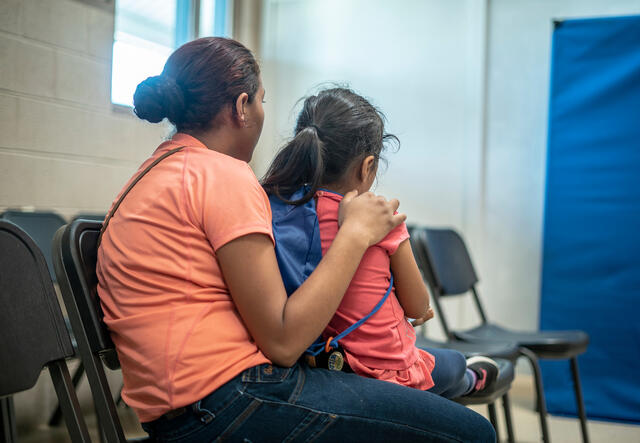 Emilia* and her 4-year-old daughter fled violence in Honduras. Since hurricanes Eta and Iota hit in late 2020, even more families in the region have had to flee their homes. *Pseudonym used for privacy.
Photo: Andrew Oberstadt/IRC

“Women are usually responsible for household tasks, and this includes gardening, manual labor and farming, as well as getting water and firewood and feeding their families,” says Tara. “All of these are more challenging when climate change has impacted the local environment.”

Gender-based violence also increases during a crisis. In Honduras, for instance, local organizations reported a 60 to 70 percent increase in reported cases of gender-based violence in the aftermath of two hurricanes and the COVID-19 pandemic. Women looking for help found themselves in overcrowded shelters suffering from a lack of privacy and increasing sexual violence.

What needs to happen

“I think we are at the point where there's willingness and opportunity, and where we have solutions ready,” says Tara. “We're starting to figure out how we can actually move the needle to reduce emissions and vulnerability.”

I think we are at the point where there's willingness and opportunity, and where we have solutions ready.

It is critical that humanitarian institutions call out the lack of global political leadership during the pandemic—and ensure we don’t repeat the same mistakes.

“There needs to be more respect for the generations of experience these leaders have in managing and maintaining their own land,” Tara says.

Future response to climate change must also be feminist, recognizing the unique and disproportionate ways women are impacted. As farmers, carers or activists, women (and women-led organizations) are central to food security and effective climate change mitigation.

None of these efforts can happen without innovation. We need to create and roll out breakthrough technologies that tackle the world’s most pressing climate-related problems, while building on local and indigenous knowledge and expertise on climate resilience and natural resource management.

How the IRC fights climate change 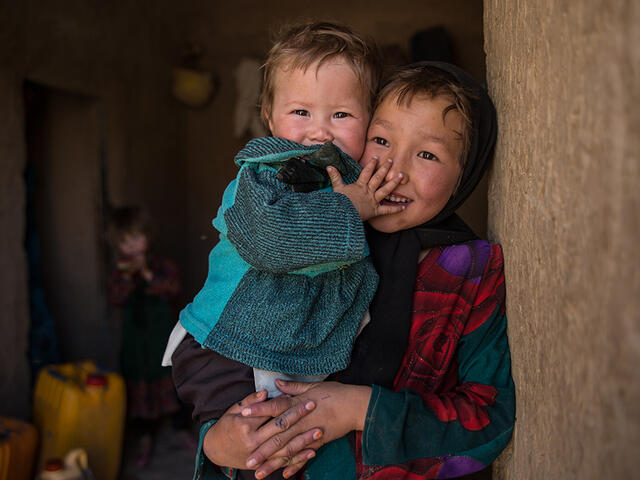 Two children whose family lost everything in a drought in Afghanistan. Their family was later supported by an IRC cash program.
Photo: Stefanie Glinski/IRC

The IRC helps communities respond to the changing climate by mapping climate hazards and developing early warning systems, supporting community-led natural resource management and water conservation, and training people in sustainable livelihoods—all while putting women and girls’ needs at the center of our programs.

The IRC has also developed partnerships for advocacy and policy change. We are a signatory to the InterAction NGO Climate Compact, a promise to advance the global agenda to drastically reduce greenhouse gas emissions and alleviate the effects of climate change on people with the least power and fewest resources.

This commitment is also reflected in the IRC’s long-term strategy. Our climate action plan puts forward an ambitious agenda to reduce our own organizational carbon footprint by pairing our community programs with concrete changes to our operational delivery, without comprising the depth or quality of support we offer communities responding to climate change.