The climate crisis is here: what it looks like in numbers

The climate crisis is already happening in countries such as Afghanistan and Ethiopia that are also experiencing ongoing humanitarian crises. People living in lower-income countries are bearing the brunt of climate change—despite that they are least responsible for rising CO2 emissions.

All around the world, climate change is fueling conflicts over scarce resources, forcing families from their homes, and increasing human suffering. Its impacts also exacerbate inequality. For example, women’s livelihoods in low-income states overwhelmingly depend on agriculture, which is increasingly threatened by extreme weather patterns. Unless world leaders act now, the situation will only get worse.

“While the existential threat posed by global warming jeopardizes us all, it is spread unevenly,” says David Miliband, president and CEO of the International Rescue Committee (IRC). “Swathes of the global population are essentially left defenseless against a problem they did not cause.”

These numbers help tell that story:

A girl whose family was uprooted by drought in Afghanistan now lives in a displacement camp: The drought, which is expected to continue into 2022, will only exacerbate the humanitarian situation in the country.
Photo: Stefanie Glinski/IRC

95% of Afghans are without sufficient food, as an economic and humanitarian crisis worsens nearly two months after the shift to Taliban control. A drought expected to continue into 2022 only exacerbates the situation. 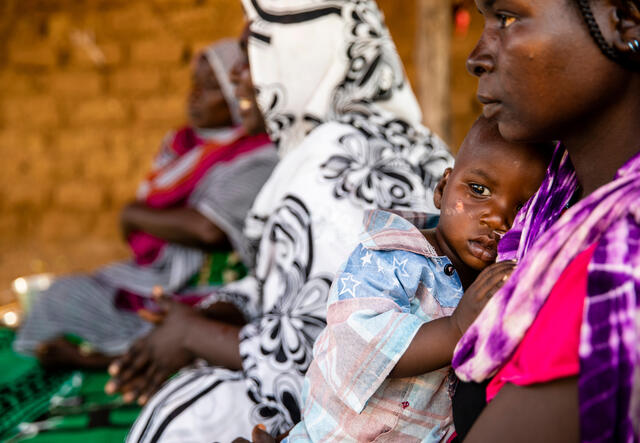 A mother learns how to identify signs of child malnutrition at an IRC information session in her village in Chad. The Lake Chad Basin is warming at 1.5 times the global rate, driving up hunger and fueling violence.
Photo: Timothy Nesmith/IRC

1 in 4 people lack enough food because of increasing drought in a region (comprising parts of Cameroon, Central African Republic, Chad, Libya, Niger, Nigeria and Sudan) that is warming at 1.5 times the global rate. This climate crisis is also increasing the threat of violent conflict. 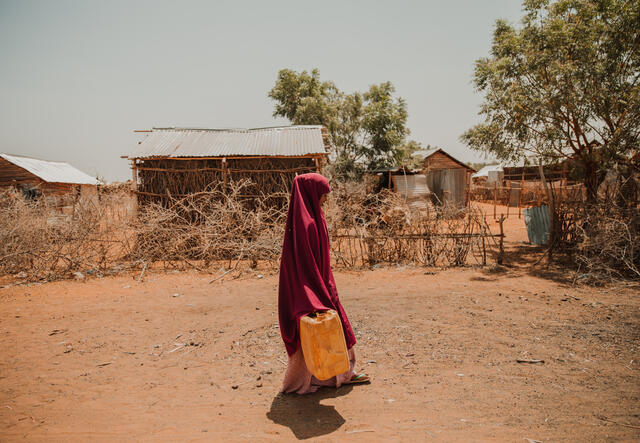 A girl goes to collect water for her family in her village in Ethiopia: As conflict rages in the northern Tigray region, the country has already endured famine and an unprecedented locust outbreak.
Photo: Martha Tadesse/IRC

11 million people are already facing crisis levels of hunger as conflict rages in the Tigray region. The country has already endured the devastating 2012 famine in the Horn of Africa (the peninsula that includes Ethiopia, Djibouti, Eritrea and Somalia) and an unprecedented locust outbreak last year.

Across the Horn of Africa 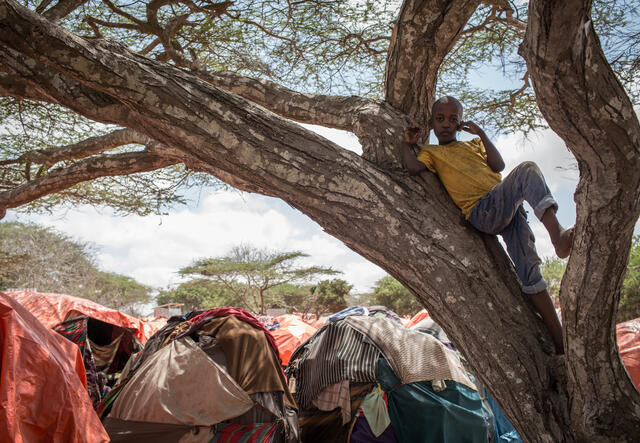 A boy whose family received support from the IRC in a camp in Somalia for people uprooted by drought: Without action, 200 million people could be displaced inside their own countries by climate change by 2050.
Photo: Will Swanson/IRC

Multiple seasons of drought plus ongoing conflict in parts of Somalia, Kenya, Ethiopia and Sudan will likely result in extreme hunger in the coming months—similar to the drought of 2016. 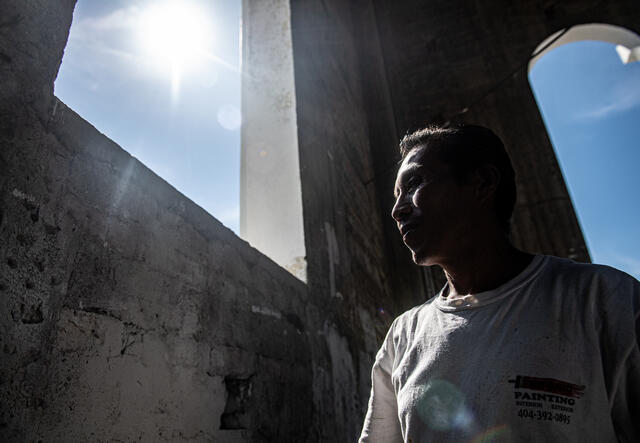 A man paints a church after being returned to El Salvador from the United States: Climate change and violence are driving an unprecedented number of people to make the desperate journey to the U.S. border.
Photo: Neil Brandvold/IRC

What can be done to help

World leaders must do more to prevent catastrophic levels of emissions and to support the poorest countries to cope with the immediate consequences of climate change.

Sufficient international funding is urgently needed to help countries adapt to a changing climate, for example with climate-resilient crops to support rural livelihoods. Funding is also needed for preparedness and response to famine and food crises, including early warning mechanisms. There’s a compelling case for this investment: One 15-year USAID study in the Horn of Africa region revealed that every $1 spent on resilience programs offset three times as much in aid costs later.

Our mood this week—and always. Wise words by @GretaThunberg.

As world leaders meet at #COP26, a reminder: the world's most vulnerable people are set to bear the brunt of climate change.

At the IRC, we'll never, ever stop fighting for them. RT if you stand with us. pic.twitter.com/3dissDx9yt

The recent COP26 climate summit in Glasgow, Scotland, included welcome cooperation between two of the largest emitters, the United States and China, commitments to reduce methane emissions, and pledges from U.S. president Joe Biden and the European Union for financial support to help countries that are facing climate change’s worst impacts.

However, the conference as a whole failed to galvanize the meaningful action necessary to support the world’s most vulnerable people. Adaptation funding for the world’s least-developed countries fell short to the tune of billions of dollars. Plans to cut emissions to limit warming to 1.5 degrees were similarly insufficient.

“COP26 was billed as a critical moment for the international community to come together and make much-needed progress in tackling the climate crisis before it is too late,” says David Miliband. “But for IRC’s clients around the world already facing emergency climate conditions, time has already run out.

“The great injustice is that these failures will be felt most deeply in the countries and populations already mired in humanitarian catastrophe, and who contributed the least.”

The IRC is at the forefront of these necessary efforts in over 20 countries. For example, in Afghanistan, we introduced community-led programs to help farmers adapt their crops for a changing climate and sustain their livelihoods. In northeast Nigeria, we partnered with Google to develop a climate risk data platform that triggers cash payments to the most vulnerable when crisis conditions are indicated. In the Central African Republic, we are working with farmers to plant thousands of trees and diversify their crops, reversing land degradation. This climate-smart approach has helped impoverished farmers in some locations to increase their income by as much as 1000%.

Learn more about the IRC’s work on climate change.