What is happening in Ethiopia’s Tigray region?

The International Rescue Committee (IRC) is extremely concerned about escalating tensions and hostilities in Ethiopia’s northern Tigray region, where many refugees, displaced families, and local communities are reeling from a year of multiple humanitarian disasters.

What is the situation in Tigray?

Ethiopia’s government declared a state of emergency in Tigray after the prime minister accused the opposition-led local government of attacking federal troops and trying to “loot” military assets.

On November 4, Prime Minister Abiy Ahmed announced he had ordered a military operation in Tigray, saying it came in response to a deadly attack on a federal army camp by the local ruling party. Phone, internet, banking and transportation services in the region have been shut down.

We are devastated to hear reports of a massacre in Ethiopia following recent events in the Tigray region. The IRC remains extremely concerned for 96,000 refugees and 2 million people in the region if tensions continue to escalate. https://t.co/LOWs1B6ltf

Millions of people in Tigray were already suffering as a result of this year’s desert locust outbreak, widespread flooding and other impacts of climate change, and—since March—the COVID-19 pandemic. More than 8 million are in need of urgent food assistance, and this is expected to rise to 11 million by January.

Who is most affected by the hostilities in Tigray?

Some 2 million people in and around the Tigray region will be affected by the crisis. If tensions spill over into the rest of the country, that number could grow to 9 million.

Any conflict will hit the most vulnerable the hardest. Among them are 96,000 refugees who fled violence in neighboring Eritrea and are living in camps in Tigray. Also vulnerable are local families who fled their homes because of violence and hunger, as well as the residents of towns where they’ve sought shelter who are also struggling to get the food they need.

The IRC is extremely concerned about the humanitarian situation if tensions continue to escalate. In the worst case scenario, we could see people displaced for years—living in crowded, unsanitary conditions where they are vulnerable to disease outbreaks and have no access to social services.

What needs to be done?

All sides in this conflict must adhere to international law, ensure the safety of vulnerable people, and make sure homes, schools, hospitals and other civilian sites are not a target. We also need to make sure that escalating hostilities do not prevent humanitarian aid from reaching those in need or hinder efforts to combat the ongoing locust outbreak.

Tigray is one of the areas worst-affected by desert locust infestation, and it faces the threat of new swarms arriving in the coming weeks. The locusts are concentrated in central and northwestern Tigray and are damaging crops, livestock pastures and rangelands that are vital to food supplies and people’s livelihoods.

How is the IRC helping in Tigray?

The IRC has worked in the Shire area of Tigray since 2001, providing vital services to Eritrean refugees living in four refugee camps: My’Ayni, Adi Harush, Hitsats and Shimelba. The refugee population has been growing since the official opening of the Ethiopia-Eritrea border in September 2018 as part of a peace deal between the two countries. 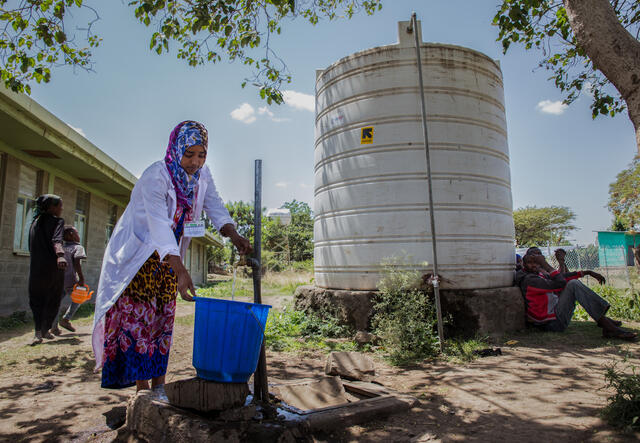 The IRC is supporting 90,000 refugees in four camps in Tigray and is concerned about disruptions to essential water, sanitation and hygiene services and the potential need for lifesaving emergency assistance if violence escalates.
Photo: Mulugeta Ayene/IRC

The IRC provides 90,000 refugees in the four camps with a wide range of services, including clean water and sanitation, protection, reproductive health care, and education. As the hostilities intensify, we are relocating all non-essential staff from Adi Harush and My’Ayni while the core team remains to ensure lifesaving water supplies can continue as long as fuel is available to power the pumps.