Over 14 million people across Somalia, Ethiopia and Kenya are on the verge of starvation as drought and conflict grip the Horn of Africa, raising the threat of famine. Extreme hunger is also growing in Africa's Sahel region, Afghanistan and beyond—especially in conflict areas where it is difficult for people to access aid.

Famines are not a new phenomenon, but they are preventable. So how are they still happening today? It’s time to take a closer look at what you think you know. Read our five facts:

Fact 1: Famine has nothing to do with having too many mouths to feed

Many people think that famine is a result of overpopulation. This common misconception dates all the way back to a 1798 essay in which the English philosopher Thomas Malthus argues that population growth will inevitability outpace available resources. “Gigantic inevitable famine … levels the population with the food of the world,” he wrote.

The reality is much more complicated: The solution has to do with early action—before an official famine declaration—to address and mitigate the true sources of hunger crises: conflict and drought.

Although many areas of East Africa are still coping with severe drought, the hunger crisis in the region is also man-made.

The impacts of climate change and the continued conflict in the Tigray, Amhara and Afar regions have pushed Ethiopia up to second on the International Rescue Committee’s list of crises expected to deteriorate most in 2022. Violence and conflict in South Sudan have cut off supply routes, causing food prices to skyrocket and hampering the delivery of aid. In this, the world’s newest nation, years of civil war have led to widespread hunger.

Beyond East Africa, conflicts in Nigeria and Yemen have created famine-like conditions for millions more. Yemen is home to the largest humanitarian crisis and the most food-insecure population in the world. Ongoing civil war has left nearly 21 million in need of humanitarian aid, without access to adequate food and clean water. Since 2012, an insurgency has crippled northeastern Nigeria. There is not enough health care or food and nearly 3 million people are displaced from their homes.

At the same time, the ongoing war in Ukraine is driving up food costs in other crisis areas. 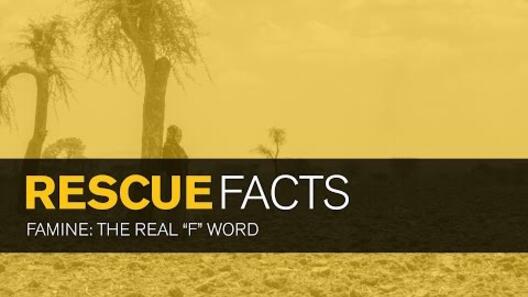 Fact 3: We need to act BEFORE famine is declared

The famine early warning system known as the Integrated Food Security Phase Classification, or IPC, looks for all three of these criteria to be met before it declares a food crisis “Level 5”— a famine:

This means that by the time a famine is declared, people are already dying. For them, it is already too late.
What is even more worrisome is that there are many more areas that are already at Level 3 and 4 that need help right now. Without immediate humanitarian aid, these will grow to Level 5 and people will continue to die.

You may remember the famine in Somalia in 2011. The international community was too slow to respond, and over a quarter million people died unnecessarily—half of them before the famine was even declared.

We have been here before, and we can prevent this from happening again, but we must act now—before it is too late. 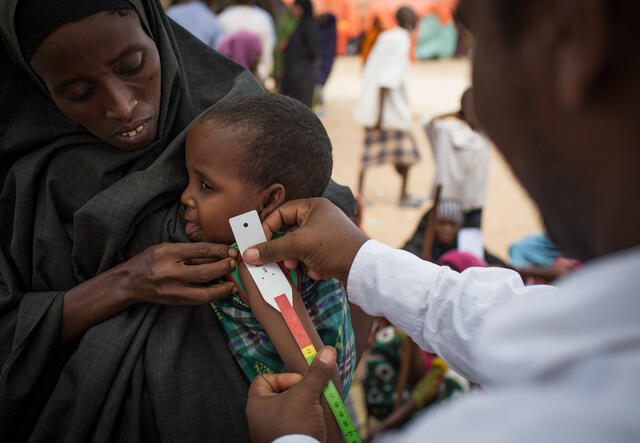 Somalis displaced by drought receive assistance at a mobile medical clinic operated by the International Rescue Committee on the outskirts of Mogadishu, Somalia.
Photo: Will Swanson/IRC

Fact 4:  Famine is not just about hunger

A famine is not just about people dying of hunger.

Famine destroys futures. We know that malnutrition is deadly, especially in infants and young children, but those who survive may suffer long-term consequences to their health and development, never reaching their full potential.

Famine fuels violence and insecurity. Global threats like terrorism grow out of poverty and political and economic instability: Conflict spreads in famine areas and other places where resources are scarce and people can’t get enough to eat.  People are displaced from their homes and lose their means of earning a living: This lack of opportunity is fodder for terrorist recruitment.

Famine destroys societies. We are at risk of losing an entire generation to starvation: children who are their communities’ best hope for a more peaceful and stable future.

Fact 5: We can stamp out famine

Let's face it: 1 famine is a catastrophe. Imagine 4. An entire generation is at risk, but you can help. Learn more: https://t.co/nCi7kI7W6upic.twitter.com/Sa5rdsXmkB

Hunger is actually the single biggest solvable problem facing the world today.  But what needs to happen?

The member countries the United Nations relies on to fund its humanitarian appeals need to make ending hunger a priority. Famine is the price of their inaction. With more foreign assistance, an urgent response to famine early warning signs, and better access to people in need, we know that humanitarian aid can save millions of lives.

But we also know that we need to tackle the source of the problem. That means unless world leaders can muster the political will to stop the wars creating chaos and hunger today, famine will always loom in our future.

Update—July 19, 2022: With a catastrophic famine looming on the horizon across East Africa, the International Rescue Committee (IRC) has released its first ever Crisis Alert update to its annual Emergency Watchlist, highlighting that over 3 million people could die without urgent international funding. Learn more about the famine threat.

The IRC is responding with nutrition stabilization centers and mobile health clinics to reach the most vulnerable; and providing water and sanitation support and safety protection. Learn how we fight malnutrition.