Why millions of people across Africa are facing extreme hunger

Update – August 1, 2022: The International Rescue Committee (IRC) welcomes the first export of Ukrainian grain since February. This shipment is an important first step towards providing relief for the growing global food crisis driving hunger in East Africa and around the world. Why are grain shipments from Ukraine so important?

For the first time ever, the International Rescue Committee (IRC) is putting out a crisis alert to its annual Emergency Watchlist report. The IRC is calling for urgent action in East Africa, with specific concern for the intensifying risk of famine in Somalia that has been dangerously neglected as the world focuses on other crises.

The IRC’s assessment was driven by the region’s unique vulnerability. It is highly exposed to a host of unprecedented challenges—from an unparalleled pandemic, to escalating conflict, to the fallout from conflict in Ukraine—and drastically unprepared for new crises due to the compound impact of three major droughts in the past 10 years, as well as swarms of desert locusts.

Ethiopia, Kenya and Somalia make up 2 percent of the world’s population, yet these three countries are home to 70 percent of the world’s most extreme food insecure. IRC teams on the ground report that people are already dying from starvation. Yet the crisis has struggled to attract the attention and funding it desperately requires.

Over 14 million people across Somalia, Ethiopia and Kenya are already on the verge of starvation—about half of them children. This number will rise to 20 million by September 2022 if the rains continue to fail, prices continue to rise and world leaders don’t boost aid funding to meet the needs of people in crisis.

Even in the best-case scenario—above-average rains ending the dry spell—it would take months for people to recover. At this stage, an immediate scale up in the humanitarian response is the only option left to prevent a catastrophic death toll.

The La Niña effect could exacerbate conditions in a country where climate change has increased the frequency of drought and flooding. These natural disasters and the continued conflict in the north of the country have pushed Ethiopia up to second on the IRC's list of crises expected to deteriorate most in 2022.

Learn more about the crisis in Ethiopia. 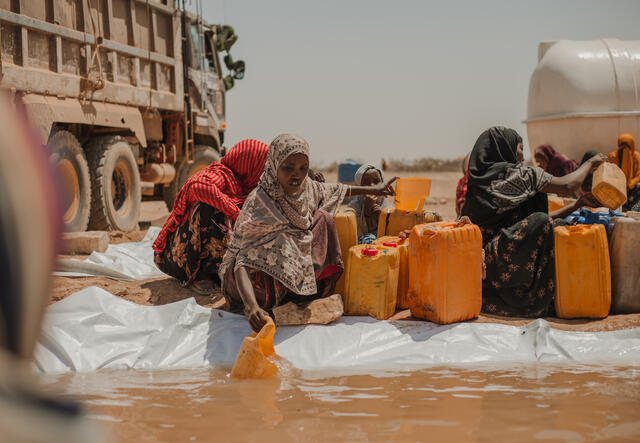 Bilan, 40, fetches water trucked in by the IRC to Ethiopia's Somali region. She says her family had 10 head of cattle before the drought, but now only has one. "We used to rely on our cattle for income," she says, "but now we share food with our neighbors."
Photo: Martha Tadesse for the IRC

Somalia is experiencing political instability and ongoing civil unrest. This conflict, paired with the impacts of climate change, has made Somalia one of the world’s worst internal displacement crises. Over 100,000 people have left their homes in search of food and water since the start of 2022. Nearly half of all children under the age of 5 are malnourished—380,000 of them are at risk of death. In one IRC clinic in Somalia, we have seen a staggering 265 percent increase in severely malnourished children under the age of 5 over the course of one month.

Learn more about the crisis in Somalia. 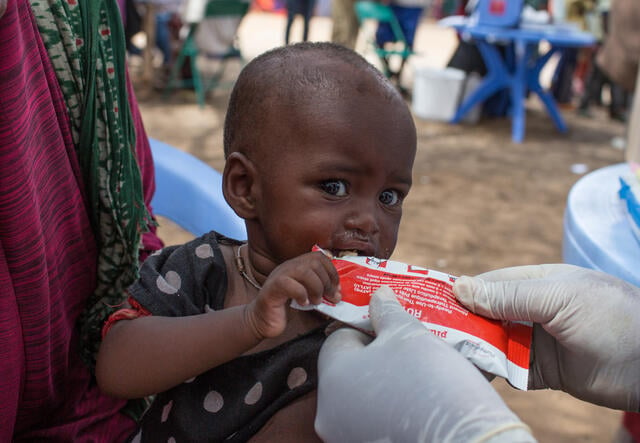 Somalis displaced by drought, including this baby eating specially nutritious peanut paste, receive malnutrition screening and other health care at a mobile medical clinic operated by the IRC at a camp on the outskirts of Mogadishu.
Photo: Will Swanson for the IRC

In September 2021, Kenya declared a state of national disaster with almost 3 million people on the brink of starvation. Thousands of Kenyans who depend on cultivation of crops and livestock are on the move to find new pastures or sources of income and food as the drought continues. Refugees from neighboring countries are also among those facing extreme hunger.

Learn more about the crisis in Kenya. 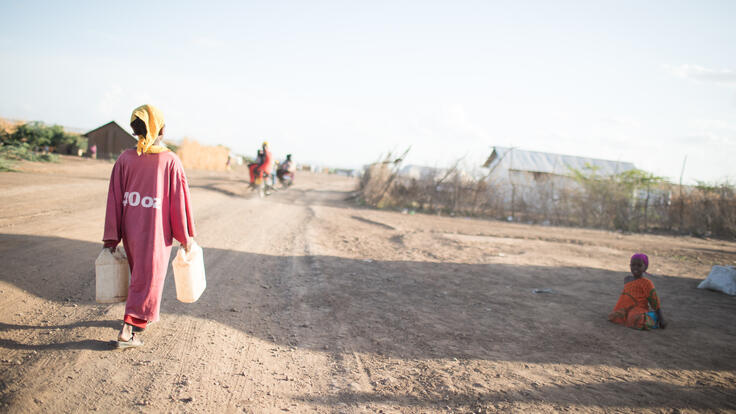 Halima Alwahab Mohamed, 10, fetches water near her home in Kakuma refugee camp in northern Kenya. Halima lives with her mother, Asho, who fled violence in Somalia in 2008. Kenya, Somalia and other countries in the Horn of Africa are facing the threat of famine amid ongoing drought.
Photo: Kellie Ryan for the IRC

Conflict, economic shocks and climate change have also been driving mass displacement in Africa’s Sahel for years. Between 2015 and 2022, the number of people in the region in need of emergency food assistance nearly quadrupled, from 7 to over 30 million. Record numbers of people are facing extreme hunger in Mali, Niger and Burkina Faso alone: this summer, the total could rise to over 40 million.

The impending famine in East Africa is a devastating example of the “System Failure” that the IRC warned about in our Emergency Watchlist 2022. The threat of famine has grown as the region and international community have failed to take action to address key drivers of hunger.

The conflict in Ukraine has pushed global prices of food, fertilizer and fuel to record levels. Ukraine and Russia produce a quarter of the world’s wheat and grain. They have historically provided 90 percent of the wheat imported to the East Africa region, a larger rise in food insecurity is attributed to the Ukraine crisis than any other region. The worst is yet to come. Reduced access to fertilizers coincided with the region’s main planting season, so the effects will not be fully seen until future harvests later this year and next year.

Climate change is a crisis that the countries in East Africa did not create but they are highly vulnerable to its effects. Somalia, Kenya and Ethiopia have faced three droughts in the past decade (2010-2011, 2016-2016 and 2021-2022), wreaking havoc on crops and livestock and making it harder for people to recover each time. Today, the region is in the midst of its longest-running drought in 40 years.

COVID-19 has increased global food prices, which have been rising since 2019. However, rather than responding where needs are greatest, many donor countries have turned inward, reducing the funds they make available.

“Every day of inaction is a matter of life or death,” says IRC president and CEO David Miliband. “The crisis engulfing East Africa is emblematic of the failure of the international system: failure of prevention, failure of response and failure of leadership."

What must be done

Famine is not a constant, inescapable risk in East Africa. What we are seeing is a failure of political will to apply lessons and act before it is too late. Rhetoric in global capitals is not translating into change for people in the world’s crisis zones.

The solution has to do with early action—before an official famine declaration—to address and mitigate the true sources of hunger crises: conflict and drought. In East Africa, it is already too late to stop people from dying, but there is still a window of opportunity to scale aid efforts to reduce the levels of death and suffering. The international community should:

Establish a humanitarian contact group. Governments of affected countries should partner with the humanitarian community and local civil society leaders to assess progress and resources allocation in the response and collectively address challenges as they arise.

Adopt and scale-up proven solutions. The response should seek to apply lessons from previous efforts to avert famine with rapid investment in proven approaches including humanitarian cash assistance.

Adopt a "no regrets" approach to funding. Drought response will require $1.1 billion more funding for the rest of the year. All donors should also provide new funding through fast and flexible mechanisms, giving governments and response partners the ability to scale up proven interventions and the surge in necessary staff.

Address global trade challenges stemming from the conflict in Ukraine. Ending Black Sea blockades is a key step in addressing the global food crisis and its impact in East Africa, but it is not the only solution. Efforts to facilitate exports overland via Poland, and to restore river ports on the Danube, should be supported and accelerated. 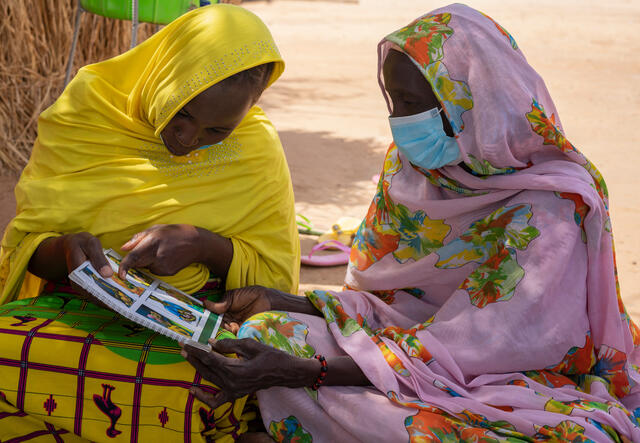 Fantaou Mallam Kiari, 20, and another displaced woman in Diffa, Niger review an IRC booklet showing ways to protect children from malnutrition. Mothers like Fantaou receive cash assistance and business training from the IRC to help them support their family.
Photo: Mamadou Diop for the IRC

The IRC reaches communities in East Africa and the Sahel with support that includes water and sanitation, education, health care, economic livelihoods, and emergency support and protection. Today, 2,000 IRC staff in the region are scaling up our programs to meet severe needs.

The IRC provided assistance to Somalis through the 2011 famine and the 2016-17 drought, giving us clear insights into the risks communities face. Our water, health, nutrition and livelihoods programs reach 280,000 Somalis a year.

The IRC reaches over 3.2 million people across the country each year through programs in environmental health, child protection, economic recovery and women’s empowerment. In 2021, we further provided critical assistance to over 100,000 refugees and more than 500,000 Ethiopians affected by natural disasters.

IRC teams deliver lifesaving emergency aid including health care, women’s protection, and legal rights education to refugee populations and their host communities. Our health, nutrition and conflict resolution programs in Kenya have delivered critical care to over 300,000 people a year, including nutrition support for malnourished children and supporting refugees and vulnerable Kenyans to start businesses and rebuild their lives.