Why Somalia is facing a catastrophic famine

Millions of people in Somalia could be at risk of famine as a severe drought and the Ukraine crisis drive up the cost of food.

Update: September 5, 2022 - The United Nations has announced that 'famine is at the door' in Somalia. Read more about the announcement here.

The worst drought in decades is ravaging East Africa, destroying crops and driving the cost of food out of reach of many. In Somalia alone, 7 million people (out of a total population of 16 million) could be at risk of famine in the next two months if aid is not scaled up to meet skyrocketing needs.

In 2011, some 250,000 people in Somalia—half of whom were children—died in a famine that followed three consecutive seasons without adequate rainfall. Less than half the aid that donor countries pledged to the humanitarian response was actually funded, making many of those deaths preventable. 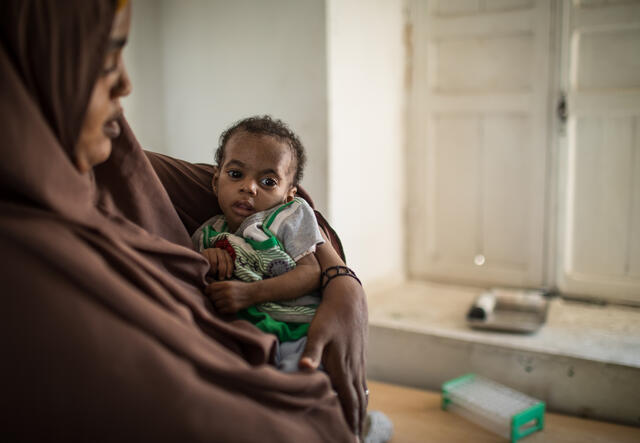 IRC clinics in Somalia are seeing a concerning rise in the the number of severely malnourished children under the age of 5 who need treatment.
Photo: Kellie Ryan for the IRC

Food crises like this one have generational impacts. In displacement camps in Somalia, IRC teams continue to support Somalis who were uprooted during the 2011 and 2017 famines. Food insecurity exacerbates existing risks of gender-based violence, including intimate partner violence, sexual harassment, exploitation and abuse, and early and forced marriage. In Somalia, more young girls are facing violence compared to previous periods, according to data from several IRC’s project sites.

As Somalia enters its fifth consecutive season without enough rain, world leaders must step up to save lives. The 2022 humanitarian response plan for food security in Somalia is currently only 20 percent funded—this at a time when the growing impacts of climate change have damaged livelihoods and the crisis in Ukraine has spiked the cost of food and the fuel needed to deliver it. As a result, 230,000 Somalis are already living in famine conditions.

“We have had to drastically reconsider our operations due to the sharp increase in prices and fuel over the last few months,” says Hashi Abdi, supply chain manager for the International Rescue Committee (IRC) in Somalia. “When we do not have enough medical supplies in our clinics, we have to turn away the increasing number of patients who are in need of critical care and support.

This is happening all the more frequently as lifesaving aid is diverted to help Ukraine—leading to an even more drastic reduction in the aid we can deliver.

The IRC is calling on international leaders and donors to immediately direct funding to drought relief in East Africa to avert looming famine. We are seeing a deeply concerning increase in admissions for acute malnutrition at IRC clinics across Somalia, with one of our nutrition clinics reporting a 265 percent increase in the number of severely malnourished children under the age of 5 needing treatment (April-May 2022).

IRC clinics in Somalia are seeing a concerning rise in the the number of severely malnourished children under the age of 5 who need treatment.
Photo: Kellie Ryan for the IRC

“As ever, this crisis is impacting the most vulnerable,” says Abdi. “Without immediate international funding, a catastrophic famine is undoubtedly on the horizon for Somalia and the region as a whole.”

Conflict and other complications

Somalia has seen three decades of conflict, destabilizing communities. Indeed, Somalia currently produces less than half the amount of food it did before its civil war began in the early 1990s, forcing the country to become increasingly dependent on food imports and highly vulnerable to supply chain disruptions and fluctuations in global food prices, such as those exacerbated by the crisis in Ukraine.

Conflict in neighboring Ethiopia has also emerged since 2020, overlapping drought and stretching the entire humanitarian response to the region. In Somalia, pockets of conflict remains active and, as the drought deepened, nearly 900,000 people are living in unstable areas. Many people have already tried to leave these areas, but those who remain are largely inaccessible to humanitarian organizations.

Failure in mitigation and response

The Somalia government issued a Drought Declaration in April; however, humanitarian aid pledges from donor countries have not translated into significant funding and a scale-up of aid to date.

Even once new U.S. funding announced this week is fulfilled, the humanitarian response plan for the region would be funded at just 40 percent.

Funding shortfalls are explained in part by the international focus on the war in Ukraine. The $1.9 billion appeal for the humanitarian response in Ukraine was 85 percent funded in just over three months. Donors raised $16 billion for wider efforts to support Ukraine within a month, demonstrating the capacity for resource mobilization when the political will exists. Yet the countries experiencing the ripple effects of the Ukraine crisis have fallen off the radar.

How the IRC is responding in Somalia 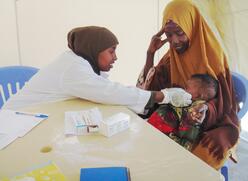 A health worker at an IRC clinic in Somalia examines a baby during our response to the famine in 2011.
Photo: IRC

The IRC began working in Somalia in 1981 in the aftermath of the Somalia-Ethiopia conflict. We provided assistance to Somalis through the 2011 famine and the 2016-17 drought, giving us clear insights into the risks communities face. Today we are scaling up our support in drought-affected areas including Mogadishu, Puntland, and southwest and central Somalia. Our water, health, nutrition and livelihoods programs reach 280,000 Somalis a year. We are providing health care for malnourished children, deploying mobile health teams to reach deeper into hard-hit areas. We are also making cash transfers to help people quickly get the support they need and rehabilitating boreholes and other water sources.

Learn more about the IRC’s work in Somalia.

Your contribution will help the IRC respond to humanitarian needs in Somalia and worldwide.