How to fight the coronavirus: lessons from Ebola

The COVID-19 pandemic that has already upended daily life for millions of people now threatens to wreak havoc in the world’s most vulnerable countries: from Syria, where war has left a nation (and region) in tatters; to Venezuela, caught in social and economic upheaval; to the Democratic Republic of Congo, still racked with violence and fighting a nearly two-year battle with Ebola.

For 87 years, the International Rescue Committee has worked tirelessly to help the most vulnerable populations around the world recover from conflict and disaster. We are uniquely positioned to respond to a crisis that, devastating as it is to Europe, Asia and the United States, could bring unthinkable loss and suffering to vulnerable people in Africa, the Middle East, and other regions.

Specifically, the IRC’s experience working in Congo and other African nations that have fought and won battles against the highly contagious Ebola virus provides insights that directly apply to efforts to contain the current pandemic. 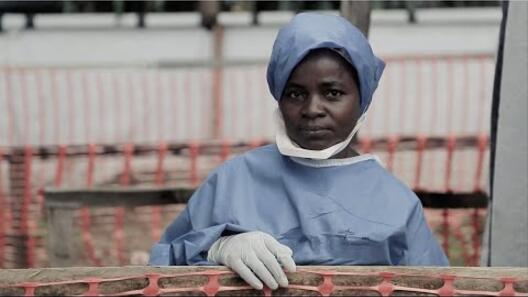 Video
What Ebola can tell us about COVID-19

"The most recent Ebola outbreak is a good example of how we coordinate and work together," says Dr. Stacey Mearns, the IRC's senior technical advisor for emergency health who was deputy director of the IRC’s Ebola response. "When Uganda started to see cases, we had two countries sitting between areas within the IRC’s operations. We learned a lot …. And I think we’ve been able to take forward some of those key lessons about how we must work."

According to Dr. Mearns and other IRC crisis experts, here are five key lessons that could save lives as COVID-19 spreads to countries with weak health systems that are unprepared to fight the disease:

During the current Ebola outbreak, communities have been largely kept in the dark with minimal access to information about the disease, prevention and treatment. Coupled with existing mistrust of government and even humanitarian aid organizations, people have fallen prey to rumor and misinformation, allowing the disease to spread. 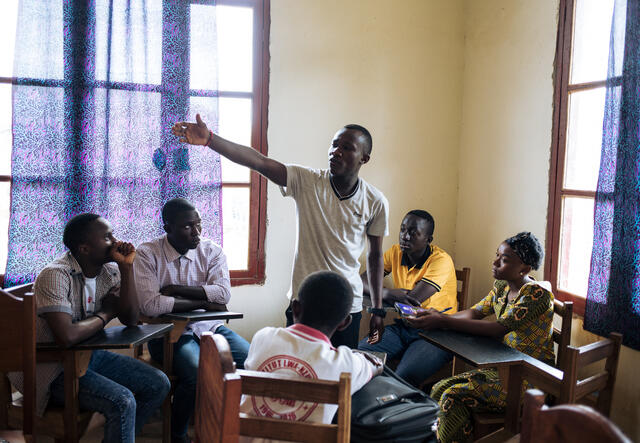 During the Ebola outbreak, people have fallen prey to rumor and misinformation. Benjamin, the head of an IRC-supported "children's parliament" in Beni, eastern Congo, leads an Ebola awareness session for teens.

Failed cooperation in Congo has meant more lives lost to Ebola. We need governments, aid groups, multilateral organizations like the United Nations, the scientific community and the private sector to coordinate an effective, rapid response to this global crisis.

"No one organization can solve this crisis in the countries in which we work," says Bob Kitchen, IRC vice president, emergencies and humanitarian action. "It’s going to take all of our programs and livesaving work in concert with our partner organizations to make a difference." 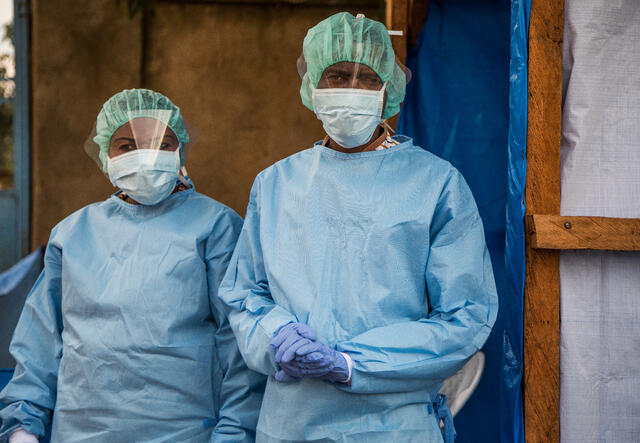 Health workers responsible for screening patients in Beni: The IRC continues to respond to both Ebola and COVID-19 and will ensure that infection, prevention and control support is provided to health centers.
Photo: Kellie Ryan/IRC

Health care systems in developing countries are already overtaxed, and the more than 70 million displaced people worldwide do not have the option of social distancing. Treating Ebola requires protective gear and medicines, but not specialized and expensive equipment such as ventilators and respirators.

"There are certainly things that we’ve learned from our work on Ebola about how we can quickly improve infection prevention and control in health facilities to make them safer," says Dr. Mearns. "This is directly relevant for coronavirus, and we are seeking to roll out and adapt our health programs accordingly."

Recognize the special impact of outbreaks on women

Women often take on caretaking roles and make up the majority of the global health care work force, leaving them disproportionately exposed. Disease outbreaks also lead to increased violence against women and children. A rapid assessment by CARE in China showed that violence increased during the COVID-19 outbreak there. 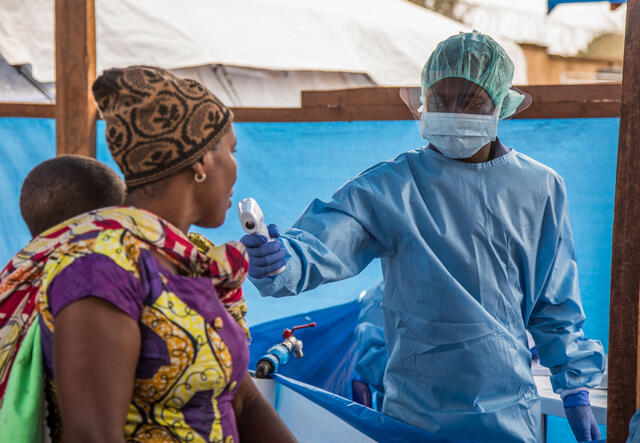 Health workers at Beni Hospital screen patients for Ebola symptoms. A new case of Ebola emerged in Beni just days before Congo was to celebrate the end of a nearly two-year outbreak.
Photo: Kellie Ryan/IRC

"Specialized protection programming should be included alongside an outbreak response," says Dr. Tessema. "For example, health care workers and first responders can be trained to identify signs of intimate partner violence and funding should be set aside for programs that focus on this."

As COVID-19 spreads to developing nations, wealthy nations and philanthropies ideally would reach out to vulnerable populations, but the fact is, the world appears headed toward an economic downturn. Regardless of available funds, the IRC is taking immediate, practical steps to contain the virus.

Our staff on the ground in more than 40 countries are scaling up Signpost, a game-changing online engagement platform that can be accessed from mobile phones. Within a week of its launch, 80,000 people in Europe logged on and accessed information specifically about COVID-19. We are currently relaunching in Greece and exploring how we can scale up the platform’s impact in other countries. The project also includes the IRC’s impressively large Facebook presence that allows us to reach vulnerable populations with posts, videos and podcasts. 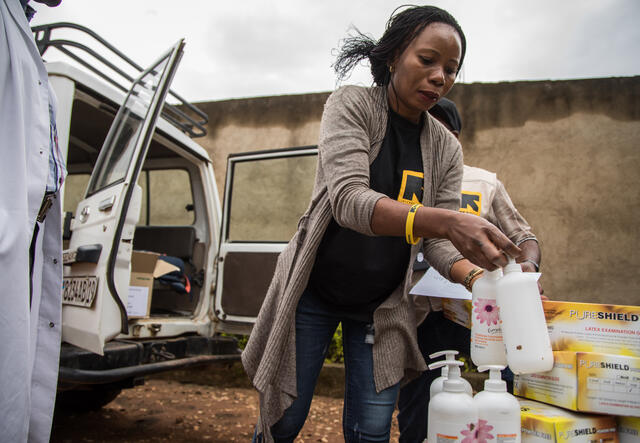 Dr. Sylvie Musema Ngimba of the IRC delivers personal protective equipment, sanitizer and other supplies to a local health facility in Beni to protect its staff and patients from Ebola.
Photo: Kellie Ryan/IRC

This is just one of the IRC's active initiatives. Refugees, displaced people, people whose lives have been upended by disaster and war, know and trust the IRC. They listen to us about the risks they face, how to stay healthy, and what to do if they fall ill. We are ideally suited to encourage people who are sick to get treatment and self-isolate.

In early March, the IRC released a blueprint for what we believe will become the humanitarian response standard. We are sharing this blueprint, the IRC COVID-19 Risk and Response Plan, not only with our staff and team leaders, but also with governments, aid organizations, and many other entities on the frontlines confronting the pandemic.

"Around the world, I’m proud of the way IRC teams are mobilizing to help fight the disease, whether it be tackling disinformation, helping health workers protect themselves, or getting effective information out to people in need," says David Miliband, CEO and president of the IRC.

"Our infection prevention and control teams are doing an amazing job. But they need to do an even bigger job. And for that, we need your help."