After a devastating hurricane struck the Gulf Coast of the United States in 2005, the International Rescue Committee was there to help survivors through the daunting and painful process of starting their lives anew.

Only days after Hurricane Katrina destroyed a swath of the Gulf Coast in August 2005, the International Rescue Committee dispatched an emergency team of relief experts to Louisiana. For the first time in its 73-year history, the organization responded to a humanitarian crisis in the United States.

“Normally, we respond to international crises caused by humans, not natural disasters in this country,” said George Rupp, then the IRC’s president. “But when we received an urgent plea for help from people in Louisiana, we decided we had to act.”

An urgent call for help

After Katrina hit, officials from the Baton Rouge Area Foundation, Louisiana’s largest community foundation, spent a futile 24 hours trying to contact federal and state officials for advice on how to cope with the growing number of people driven from their homes by the storm. They decided to call the IRC, said John Davies, the foundation’s president, because of its experience with similar situations around the world. “This was a Banda Aceh-type crisis,” Davies said. “We went and found the guys that did Banda Aceh.” 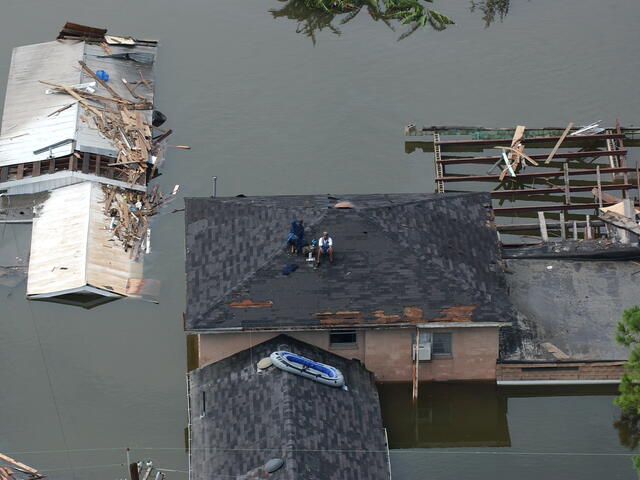 People sit on a roof in a flooded New Orleans neighborhood waiting to be rescued after Hurricane Katrina, August 30, 2005. The storm killed over 1,800 people in Gulf Coast states and forced over a million from their homes.
Photo: Jocelyn Augustino/FEMA, licensed under Public Domain via Wikimedia Commons

What the IRC team found in Louisiana might have reminded them of Banda Aceh after the 2004 tsunami: mile after mile of devastated coastline, abandoned and destroyed homes, a breakdown in public order and health care. The team’s specialists, all of whom had worked in war zones or disaster areas, carried out a rapid assessment of the crisis and advised local officials on restoring critical services such as sanitation, water and emergency medical care.

IRC experts also worked with the Baton Rouge Area Foundation to help children who were forced to endure Hurricane Katrina and the catastrophic flooding of New Orleans start to heal. Some of these children sat on sweltering roofs for days on end waiting for helicopters and boats to rescue them. Others huddled in the heat and stench at that city's Superdome with little to eat or drink. 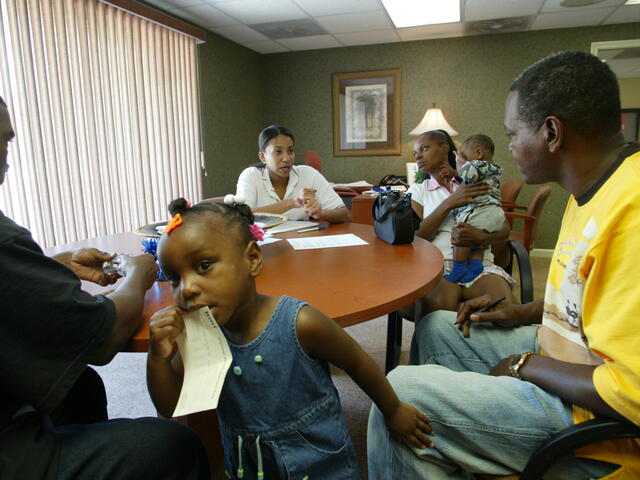 The IRC provided a wide range of support to the Freeman family, who lost their New Orleans home to Hurricane Katrina.
Photo: Jim Stawniak

Modeled after IRC "Child Friendly Spaces" in such conflict zones as Afghanistan and Sudan, the program afforded these traumatized children a safe place to play and have fun — and readied them to return to regular classrooms when the crisis was over.

“We want to encourage vulnerable children to stay in school," said IRC educational adviser Rachel McKinney, who ran the program in Baton Rouge.

Starting over far from home

As the thousands of displaced hurricane victims began to overwhelm local authorities in dozens of U.S. cities, the IRC stepped into the breach. Across the country, IRC resettlement offices, which had long assisted refugees from Africa, Asia, Latin America and Europe to rebuild their lives, extended aid to families displaced by Katrina, helping people find food, housing, clothing, counseling—and each other, through a system that registered and tracked people uprooted by the storm. 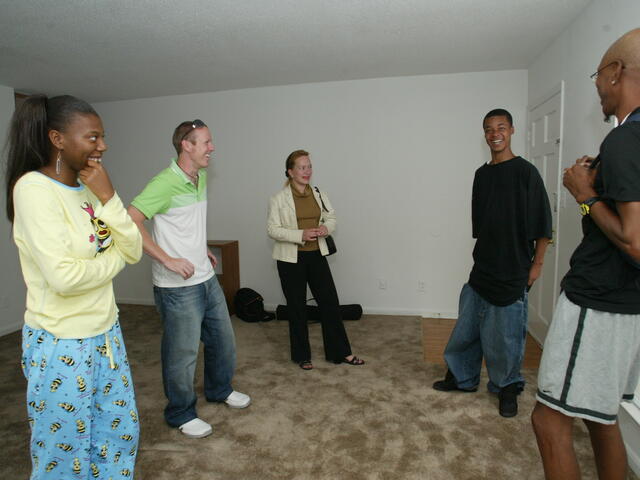 ​Lola Freeman (left) tours her family’s new apartment in Atlanta with IRC caseworkers in the fall of 2005.

Because it would be a long time before many of the families could return home, the IRC helped them find and furnish new homes, stock their pantries with food, get new jobs, enroll their children in school, and get comfortable in their new communities.

"There is no cookie cutter response to a disaster like Katrina," said Christine Petrie, then the IRC's national resettlement director.  "In order to bring order to the chaos there has to be an individual family approach."

Refuge in a new city

Atlanta was among the U.S. cities most affected by the arrival of evacuees from the Gulf Coast. During two years of operation, the Atlanta program distributed $350,000 in direct assistance to 1,300 evacuees and matched volunteer mentors with over 200 affected families.

Thousands of families struggled to build a new life in Georgia while still carrying debt and responsibilities from their Louisiana homes. The IRC provided intensive case management for evacuees suffering from career interruptions, post-traumatic stress disorder, problems with insurers and debt. 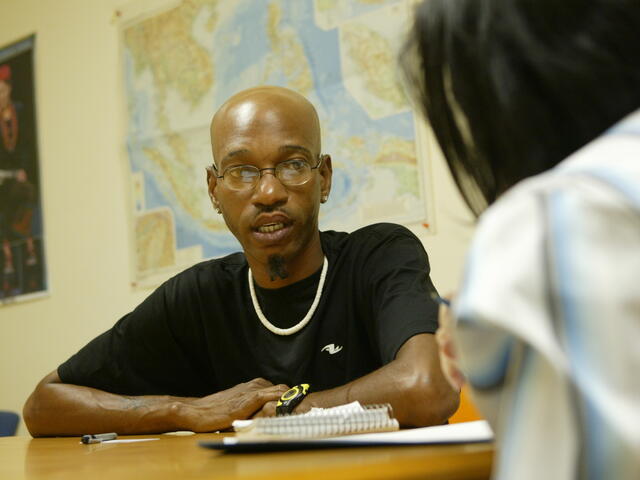 “The IRC filled an enormous gap and was a key player in helping thousands of displaced people and families,” said Ellen Beattie, director of the IRC in Atlanta at the time. “We also learned that the IRC’s system of resettlement really works in situations like these. The experience of being forcibly displaced is the same wherever it occurs.”

Many of the IRC staff members who worked one-on-one with evacuee families knew firsthand what it was like to have to start over. They were former refugees who had come to the U.S. with the IRC's help from Bosnia, Sudan, Somalia, Rwanda, Iraq and elsewhere.

“I never thought I would be assisting Americans who were facing almost the same kind of situation that refugees face,” said Albert Mbanfu, from Cameroon, who was hired by the IRC as a job developer in Atlanta soon after gaining political asylum in 2005. “I was a displaced person helping displaced people.” 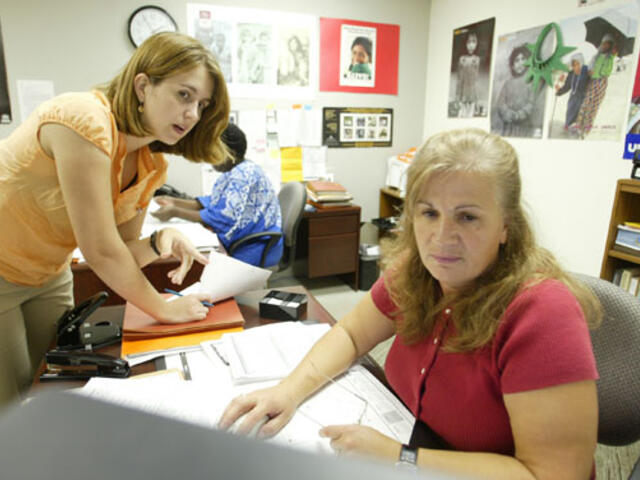 "I wanted to help and to pay back because, really, so many generous people had helped me, my family and other refugees," said IRC caseworker Elhamija Kadic (right), from Bosnia.
Photo: Jim Stawniak

“It was surprising to see just how ‘displaced’ these families felt, and how many more parallels to the experience refugees go through there were than anticipated," recalled Ellen Beattie. "They were in their own country, speak the language, understand so much of the context, and yet they would comment all the time on how bewildering all the differences were to them."

Most of the Katrina evacuees the IRC assisted were born and raised in New Orleans and had deep ties to their neighborhoods. They mourned the loss of loved ones and homes to the storm, and struggled to keep in touch with relatives and friends who had dispersed or remained behind.

The IRC was there in Atlanta and other cities to help these survivors through the daunting and painful process of starting their lives anew — even if they would be there for only a short time before returning home to help New Orleans recover and rebuild.

Refuge in America: the IRC's work in the United States