Home to four million civilians, northwest Syria is in the midst of a humanitarian catastrophe.

Intense fighting in Idlib has forced 950,000 people to flee since December 1. More than 50 percent have been women and children. Many of these families had fled the area previously during earlier waves of violence.

The International Rescue Committee spoke to Syrian men and women who have found temporary safety in Idlib—but worry they will be uprooted once more—about the places they escaped, and what they hope the future holds.

Nasser’s* two sons were killed during airstrikes in Idlib and Raqqa. One of his sons was about to get married; Nasser had built a new floor atop his lakeside house in Aleppo for the couple.

“There was shelling everywhere,” recalls Nasser, 55, who had been displaced 10 times before arriving in Idlib with his three young daughters

I used to cry at night from losing my two sons.

. “There was no psychological nor physical comfort in any place I moved to. I used to cry at night from losing my two sons in the shelling. They were all the support I had.” 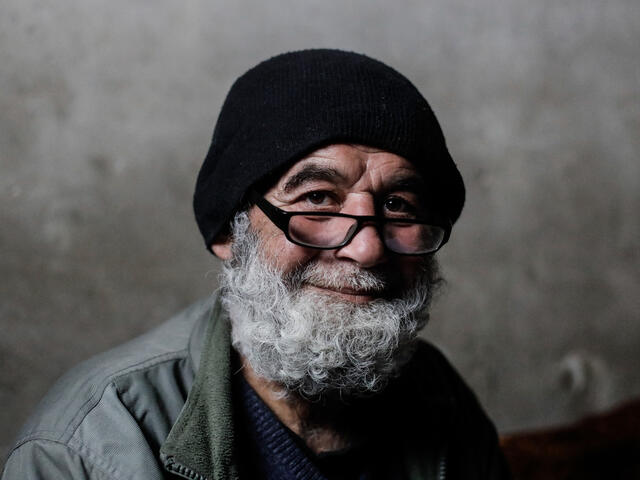 After having lost both his sons in the conflict and being displaced at least 10 times, Nasser suffered from a motorbike accident which left him with a permanent disability. Nasser received cash assistance from the IRC to help pay for food and other basic items.
Photo: Abdullah Hammam/IRC

Nasser, who studied music, is raising his daughters as a single father in a town in Idlib. He received cash assistance from the IRC to help pay for basic needs such as food, water and home supplies. He dreams of safety for his daughters and an end to the conflict.

“I hope things will become better. People have suffered a lot.”

We stayed in shelters and basements during the shelling, but it didn’t work.

Watfa, 37, is originally from a village called Ma’aret Hurmah in Idlib. She was forced to flee four times due to shelling. Most recently, in May, her house was destroyed by an airstrike as she was preparing dinner with her uncle, cousin and sister.

“We stayed in shelters and basements during the shelling, but it didn’t work,” she says. “It was Ramadan and we wanted to prepare Iftar. When we went up, we saw nine planes bombing. That’s the moment when our home was destroyed.” Watfa left Ma’aret Hurmah for another town in Idlib where she now resides with her family.

Watfa was able to bring very few of the family’s belongings with them from their home, which was destroyed in an airstrike last year. As her mother loves sewing, she made sure to rescue her sewing machine and the blankets she had made because she knew they would bring her great comfort.
Photo: Abdullah Hammam/IRC

“We were able to carry a few things before our home was destroyed,” Watfa says. “My mother makes blankets and covers. I carried them with me because I know how much she loves her work.” With the IRC’s support, Watfa received cash assistance to take her mother to the doctor and purchase medication during a brief pause in fighting.

Our biggest fear is not being able to offer medical help to patients.

Attacks on hospitals and health care facilities, including ones supported by the IRC, remain a major concern. Although the need is constant and increasing, hospitals and clinics are facing a significant gap in funding for medications, mobile health clinics and mental health services. With several health facilities having to close because of danger, those that remain open are overcrowded

“After the recent offensive in the spring, some medical facilities were shut down putting pressure on hospitals and resources in other parts of Idlib,” says Dr. Karam* who works as a pediatrician for Syrian American Medical Society, an IRC partner organization. “As a result, we are working under pressure and are lacking already scarce medical resources. Our biggest fear is not being able to offer medical help to patients.”

Last December, the IRC’s ambulance team transported 231 critical cases to specialized hospitals, including cardiac emergencies and pregnant women who were going into labor or experienced a miscarriage. 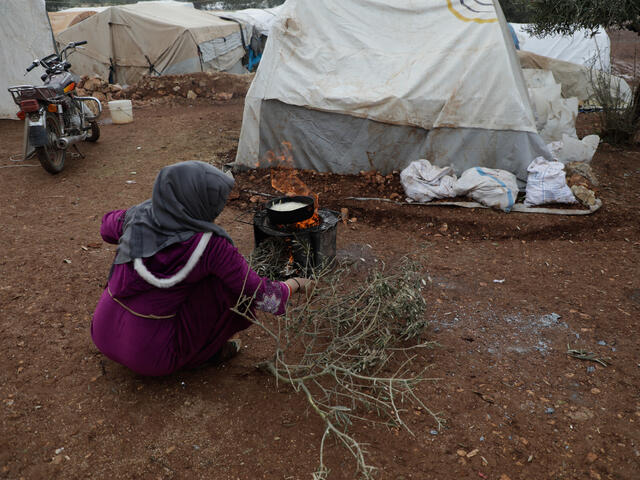 A Syrian woman uses olive branches as firewood to cook in a makeshift camp on the outskirts of Qah, a village in northern Idlib .
Photo: Abdullah Hammam/IRC

Many of the newly displaced families have no choice but to camp out in the open where temperatures plummet to zero at night. They urgently need shelter and fuel to keep warm as well as psychosocial support to help them cope with recent traumas. Instead, people shelter wherever they can—in schools, mosques, unfinished buildings, shops, and flimsy tents. Winter weather has brought flooding and bone-chilling temperatures.

“The tent is not suitable for winter as it is worn out, says Mohammed,* who lives in such a makeshift camp in Idlib. “Our tent is very weak and cannot resist the wind, so we used our clothes to tie it to the ground. We used our blankets to stop leaks and now we cannot afford new ones. We also fear the possibility of fire as we use a wood heater—fuel heaters are expensive.” 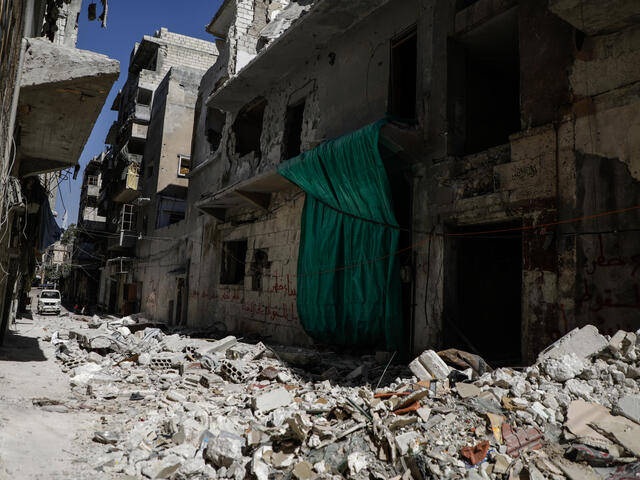 Destroyed buildings in Ariha, a city in Idlib province: More than 900,000 people have fled their homes in Idlib and other areas of northwest Syria since last April.
Photo: Abdullah Hammam/IRC

Since last April, over a million people have fled their homes in northwest Syria. If violence continues to escalate, an estimated 400,000 could soon become displaced, creating the largest displacement inside Syria since the conflict started.

The IRC and its partners support 20 health facilities (two hospitals, 11 primary health clinics, and seven mobile clinics) and two ambulance fleets. We are providing urgent cash assistance to families to help them through the cold winter months. Learn more about our work.

*Names have been changed for protection