The first thing this family did upon arriving to America from El Salvador was get to work, study, and make a better life for their new community as well as themselves.

Violeta says her courage, determination and love comes from her 22-year-old daughter, also named Violeta. Violeta Jr. smiles and says it’s her mother who inspires her. Both women greatly value these traits as they carve out their new lives in America.

Violeta Sr. had fled gang violence in El Salvador, reuniting in San Jose, Calif., with her husband, who had emigrated to the United States several years ago in search of a better opportunity for his family. It was hard raising Violeta Jr. alone back home, Violeta Sr. admits, especially when things started to get worse in their neighborhood. 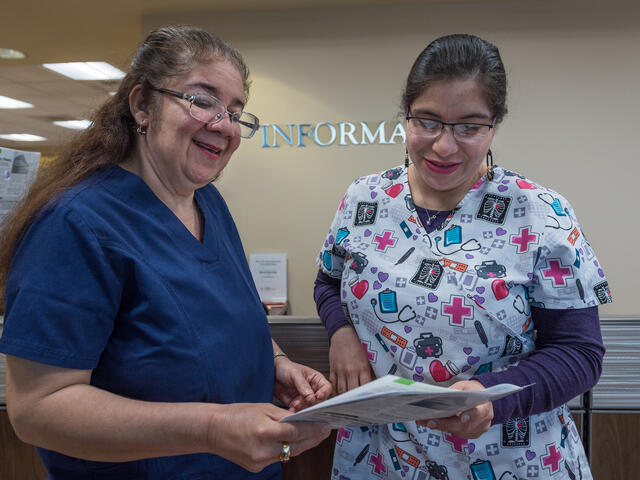 With the support of the IRC, Violeta Jr. and Violeta Sr. passed their exams to become certified nursing assistants. They now work at Amberwood Gardens, a skilled nursing center specializing in rehabilitation.
Photo: Federica Armstrong/IRC

“It was once a safe and beautiful neighborhood, but then the shootings and killings started, sometimes on our same block,” Violeta Sr. recalls. “At night, we heard gunshots. It’s not easy for people to change neighborhoods. That is not the way out. Nowhere is safe.”

“When I was little, I was able to go outside and play with my friends,” Violeta Jr. adds. “Eventually, nobody wanted to go outside because everybody was afraid.” Terror had become a daily reality.

At the time, Violeta Jr was attending university to study nursing. Violeta Sr. was working as a healthcare professional. Despite these advantages, Violeta Sr. worried that her daughter would get caught in a crossfire—or be kidnapped. But she put on a brave face and hoped that, one day, a window of opportunity would present itself.

And it did. With the International Rescue Committee’s support, Violeta’s husband was able to petition for the rest of his family to resettle in the U.S. after an extensive process of interviews and background checks. 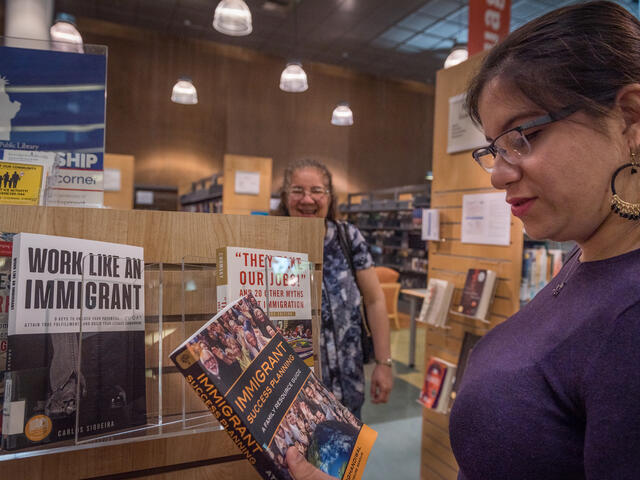 Violeta Jr. with her mother at a local book store in San Jose where the family enjoys studying English together.
Photo: Federica Armstrong/IRC

Arriving in the U.S. with just a suitcase between them, Violeta Sr. was relieved but anxious. Violeta Jr. was excited to see her father again, but wondered if they were really safe? “We were still very afraid,” she says.

But the family vowed to work hard and dedicate their lives to helping others. “From the moment we arrived, the IRC took us by the hand and guided us,” Violeta Sr. says. “They never left us on our own until we were ready. They taught us how to live [in our new country].”

The IRC also helped Violeta Sr. and Violeta Jr. find jobs. Violeta Sr. initially worked in housekeeping and Violeta Jr. at a Burger King. Later, they enrolled in the IRC's CareerLink program. Both received $1,500 scholarships to complete vocational training and externships in the health care field. The IRC helped them prepare for their exams to become certified nursing assistants. They now work at Amberwood Gardens, a skilled nursing center specializing in rehabilitation. 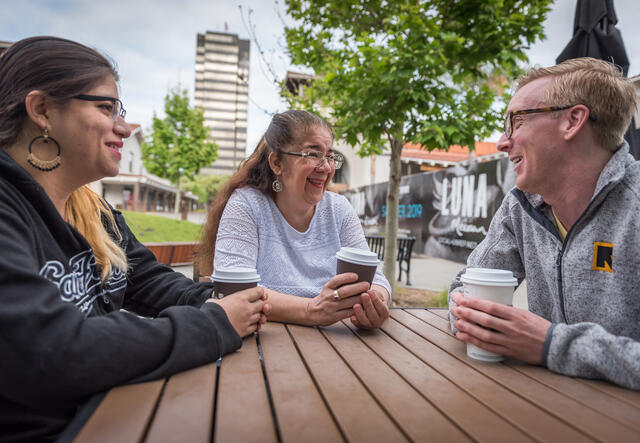 "Violeta and Violeta are such a great example of putting in the hard work to start a new life and providing each other with great support that shows the unconditional bond between them," said Kevin Davis who works as the IRC's career development coordinator in San Jose.
Photo: Federica Armstrong/IRC

“We like to go to work together because we can help each other out,” says Violeta Sr. “We love being mother and daughter.”

"It's always difficult to come to a new country and try to restart a career," adds Kevin Davis who works as the IRC's career development coordinator in San Jose. "Violeta and Violeta are such a great example of putting in the hard work to start a new life and providing each other with great support that shows the unconditional bond between them. It has been a real pleasure working with them and seeing how far they have come in such a short period of time."

They continued to improve their English, taking classes together. They are incredibly proud of everything they have accomplished, but each credits the other for their success. As they tell other people in similar situations, with help and support, it is possible to find the inner strength to fight for your dreams.

“You have to remember that not everything is given to you,” says Violeta Sr., summing up her and her daughter’s approach to life. “You have to work hard, and working hard helps you forget about all the pain you went through. Think about your future. Don’t be a burden and always focus on doing the right thing. That’s our strength.”