“One day we’ll go home”: How Syrian mothers care for their families in crisis

Mothers have a tough but rewarding job. For many mothers in Syria, that job is made even tougher by the impacts of over ten years of war.

The decade-long conflict in Syria has forced millions of families to flee their homes and has decimated the economy and health system. As with any crisis, it’s women and children who face the greatest challenges. Many mothers must be sole caretakers, breadwinners, and pillars of strength for their children, some young enough to have known nothing but war.

In their own words, hear from these Syrian mothers about how their families have been coping with the ongoing crisis. 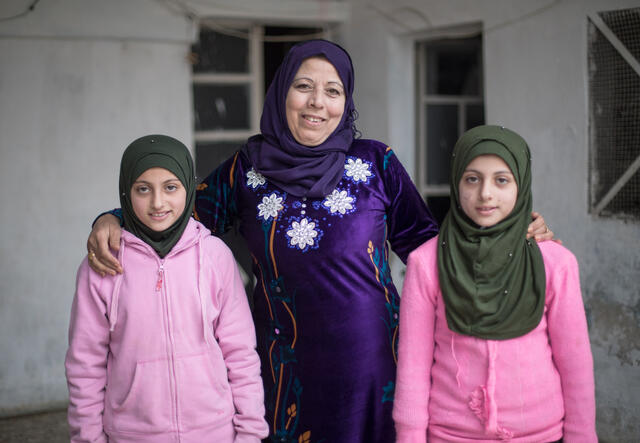 “My only hope is for my kids to become educated and independent,” says Reema.
Photo: Abdullah Hammam/IRC

Reema* is a single mother of three children—twins Shurouq and Shirina, 10, and Eissa, 9. After their home was destroyed in the war, they moved multiple times in search of safety. The family now lives in a village in northwest Syria, where Reema is happy her children can go back to school.

“My only hope is for my kids to become educated and independent,” Reema says. “Being a good mother means raising your kids, taking care of them, and for every one of them to end up being what they want to be.”

Reema was a seamstress in her home village, but lost her tools when she fled the shelling and airstrikes. She works hard to make ends meet and keep her children safe even though jobs are scarce.

“I don’t have a man to help me,” Reema says. “I work to be able to secure all my children’s needs, so they don’t have to rely on anyone else.” 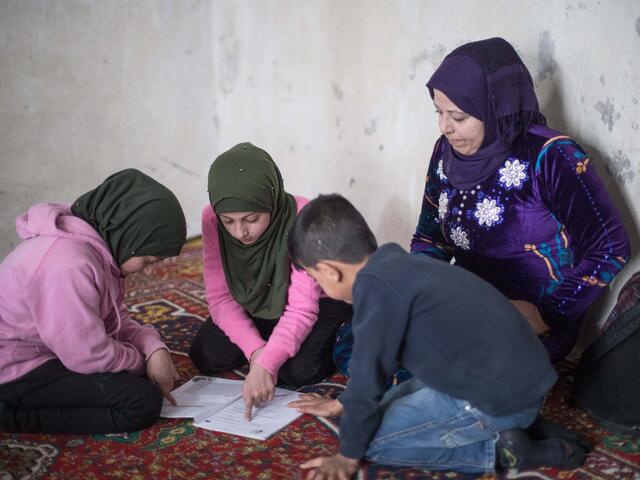 Reema with her twins Shurouq and Shirina and their brother Eissa. "My mom teaches me and encourages me to get high marks," says Shirina.
Photo: Abdullah Hammam/IRC

The IRC connected Reema with a job making soap, part of a program that helps vulnerable Syrians earn money to cover basic needs.

“I earned some money which I used to buy firewood and some stuff for the house,” Reema says. “I saved the rest for difficult days—to buy bread and secure other expenses when necessary.”

Reema’s greatest hope is for her children to achieve their dreams; Shirina wants to be a teacher and Shurouq wants to be a doctor. But most of all, they want to return home.

“I try to keep my kids’ spirits up by reassuring them and making them feel safe,” Reema says. “I keep telling them, ‘Don’t be scared, one day we’ll go home.’” 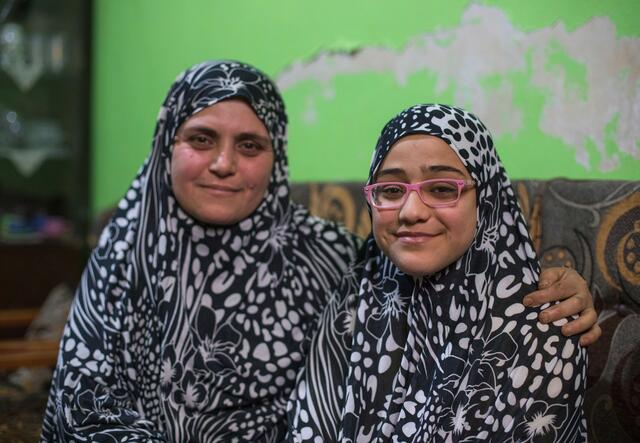 “We always discuss our problems in order to solve them,” Ruba says of her children, “and we always try to make each other laugh."
Photo: Abdullah Hammam/IRC

Ruba is a mother of six children who range in age from 11 to 27. Her family was forced to flee from their hometown due to shelling, but they are grateful to have each other during hard times.

“We always discuss our problems in order to solve them,” she says of her children, “and we always try to make each other laugh."

“My role as a mother is to guide them on the right track, to remind them to pray and not fight with each other, to be kind to each other,” Ruba says. “What matters most to me is standing by our children.”

After the clothing shop she was working in closed, Ruba participated in the IRC’s soap-making project. Now, she plans to use her earnings to open her own shop. 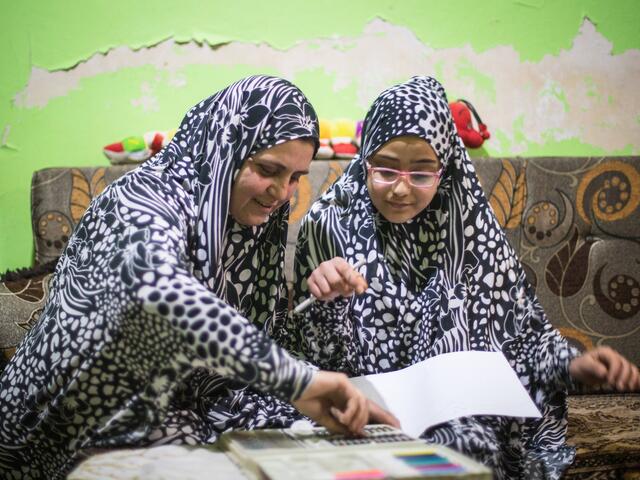 "The thing I love most about my parents is their kindness," Ruba's daughter Salam says.
Photo: Abdullah Hammam/IRC

“It was a great opportunity to work on this project,” Ruba says. “A lot of people have lost their jobs in the pandemic and are in need of support.”

While Ruba’s children have been in and out of school due to conflict, she continues to work hard to build them a better future.

“I wish them all success and good jobs and to be happy in their lives and achieve everything we couldn’t achieve,” she says. “I wish them to have a life free of problems and hatred.” 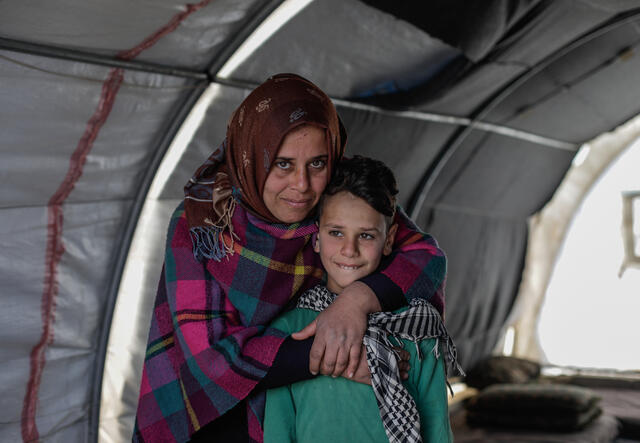 “We were scared at night but I’d tell [my children] stories to help them fall asleep without worries,” Sundus says. Her family had to flee their village and take shelter in a closed school.
Photo: Abdullah Hammam/IRC

Sundus is a mother of five children who range in age from 6 to 18. When her family left their village due to violence, they thought they’d be back in a couple of days. It’s since been two years.

Sundus and her family first took shelter in a closed school and picked olives during the day to make money.

“We were scared at night but I’d tell [my children] stories to help them fall asleep without worries,” Sundus says.

Sundus used the money she earned to buy two sewing machines and begin working as a tailor from her home. Her children have been out of the classroom for two years due to war and now also the COVID-19 pandemic. Like so many other young Syrians, they pitch in to help their family survive. 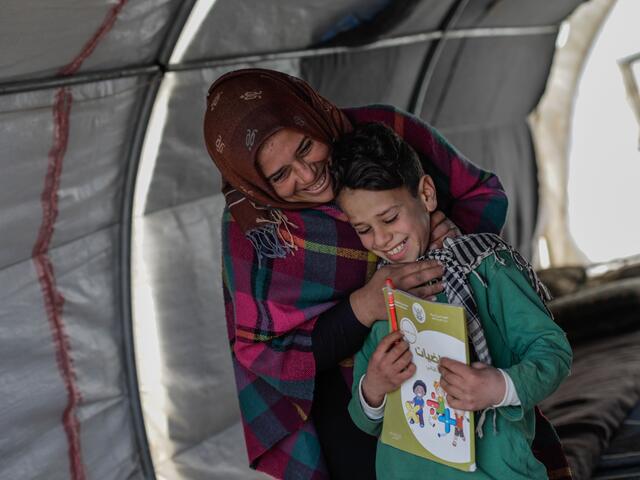 "I love my mother a lot because she’s my mother and she’s so loving," Sundus's son Omar says.
Photo: Abdullah Hammam/IRC

“Both my sons and daughters help me whenever they can,” Sundus says. “Omar never lets me buy firewood at all. Every day he gets dressed, whether it’s cold or not, and goes to the mountain to bring me firewood.”

What Sundus wishes for most is for her children to one day return to school and complete their studies.

“For their future I hope that they continue studying and that we can go back home,” Sundus says. “I hope that I can raise my kids in their home village and establish their futures there.” 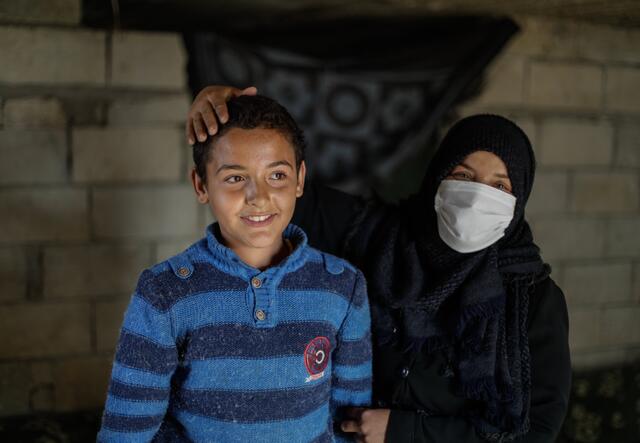 “I hope that all the organizations and other countries can hear me because people really need help," Muna says.
Photo: Abdullah Hammam/IRC

Muna and her son Tareq, 10, were forced to flee their home due to shelling in their village. They have since moved three times and now live with Muna’s sister.

“The most difficult thing I’ve faced in the past 10 years as a mother is living in poverty and living in a shed where a cow used to live,” Muna says. “We cleaned it up and now we’re living in it. We need to survive.”

Through these difficult experiences, Muna and Tareq know they have each other.

“Sometimes I sit with my mom and we play games together,” Tareq says. “The thing I love most about her is that she loves me and she always pampers me. Whenever I feel sad my mom hugs me and cheers me up.” 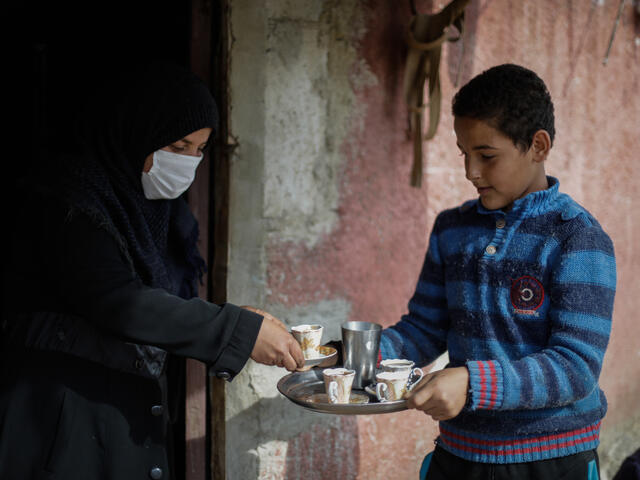 "Whenever I feel sad my mom hugs me and cheers me up," says Muna’s son Tareq.
Photo: Abdullah Hammam/IRC

Tareq also takes care of his mother by gathering firewood.

“I’m really proud of Tareq, he’s well-behaved and he treats me so well,” Muna says. “He is one of a kind. He’s a great kid and I’m nothing without him.”

Both Muna and Tareq look forward to the day they can return home and rebuild their lives.

“I know children would have had a better life if there was no war because they’d be living in their own homes and villages, among their families,” Muna says. “I hope that all the organizations and other countries can hear me because people really need help. They’re in dire need.”

*All names have been changed to protect the subjects' privacy.

About the IRC in Syria

The IRC has been delivering aid in Syria since 2012. In 2020, our health, protection and livelihoods programs reached nearly one million people in the country.

In response to the COVID-19 pandemic, the IRC incorporated prevention and control measures to keep our health services running without interruption. Additionally, we have a fleet of ambulances, five of which are dedicated to the COVID-19 response, transporting people who may have the virus to testing facilities and then transferring them for treatment. We are also providing community outreach to raise awareness of the pandemic and to teach people how they can protect themselves from the coronavirus.

In addition to health care, the IRC supports survivors of violence and abuse with counseling and other services; safe spaces for women and children; and women’s empowerment and child protection programs. We also offer emergency cash distributions, business grants and training.