Skip to main content
A decade of war in Syria

The Syrian 10 year olds who’ve known nothing but war

On the tenth anniversary of the war in Syria, the International Rescue Committee spoke with 10 year olds and their parents about growing up knowing nothing but war.

Most 10 year olds want the same things: to learn, to play, to feel safe. But for millions of children growing up in Syria, these simple joys have been stolen by a decade of war.

Syria reaches this grim milestone this month. The acute humanitarian emergency that has defined the country since 2011 continues to devolve as the endless conflict grinds on. The 6.7 million internally displaced people include an estimated 2.5 million children who have witnessed unimaginable horrors. They have had their lives turned upside down, and have seen everything that was familiar to them change in an instant—often many times over.

Syrian children have missed years of schooling. Education provides a sense of stability and predictability, builds resilience, and of course, provides the foundation for success.

Parents want the war to end so they can provide better opportunities for their children and their children want to go home, continue their education and look forward to bright futures. They dream of becoming doctors, architects and soccer players. Hear from these 10 year olds on their favorite things, their experiences of displacement and the hopes they hold onto—even as they are forced to grow up knowing nothing but war.

Ten-year-old Tareq is like many boys his age. He loves soccer, is scared of the dark and finds comfort in his mother’s hugs. Forced to leave their home by constant shelling, Tareq and his family have been displaced three times. 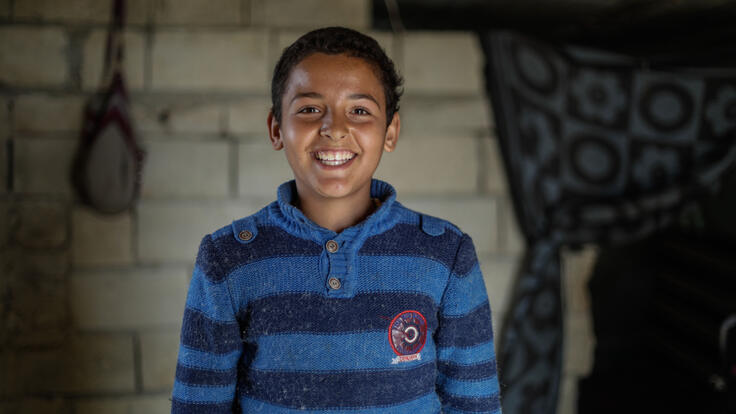 Tareq and his family have had to uproot their lives multiple times because of the war. "For me, a beautiful day is when we win a soccer match” says Tareq. “Like yesterday, we won one, and two days ago the teacher gave me a star in my notebook.”
Photo: Abdullah Hammam/IRC

Each time Tareq’s family was forced to move, his parents had to register him at a new school. “He used to be an excellent student back in our village, but now he’s behind,” says his mother, Muna. “He should be in sixth grade, but he has had to change schools so many times.”

The IRC connected Muna with a job picking olives, part of an IRC program helping parents affected by the conflict to support their families. 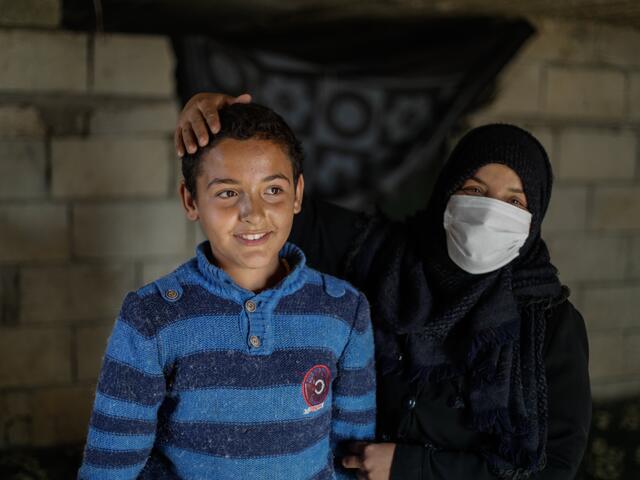 "I’m really proud of Tareq,” says his mother, Muna. “He’s well-behaved … one of a kind. He’s a great kid and I’m nothing without him."
Photo: Abdullah Hammam/IRC

Despite the challenge of living through a decade of war, Tareq remains optimistic. “My friends and I study together for our exams,” he says. “My biggest hope in life is to become a doctor—or a soccer player.”

Displaced several times during their first decade of life, twins Aisha and Ali and their family have been able to return to their home village. “We suffered a lot at the beginning, but things are better now,” the twins’ father, Hassan, tells us. Their home remains damaged from an airstrike.

The IRC connected Hassan with a temporary job renovating a local health clinic. The hardest thing he faces as a father, he says, is providing a safe place for his family. “There is no income, and the cost of living is very high.” 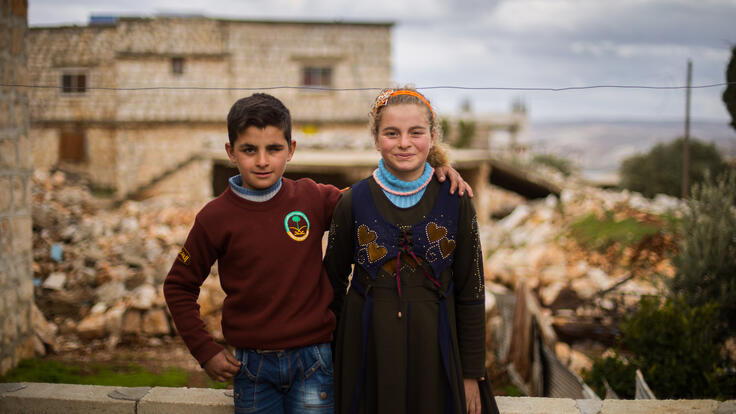 When she and her family were living on a farm outside their village, Aisha had a motorbike accident on her way to school. The accident has left her with a speech impediment.
Photo: Abdullah Hammam/IRC

The twins have missed years of education, but they are back in school now.  “When I grow up I want to be a doctor so I can treat children,” Aisha tells us. The 10 year old was in a motorbike accident that left her with a speech impediment. Ali, who was born blind in one eye, has similar humanitarian goals. "When I’m older, I want to work distributing aid to people,” he says. “In the future, I’d like life to be good and beautiful. I want to work helping people."

Hassan and his wife have striven to keep their children’s spirits high. “We try to erase their fears of war,” he explains. “When children see their parents scared, they become more scared, too. 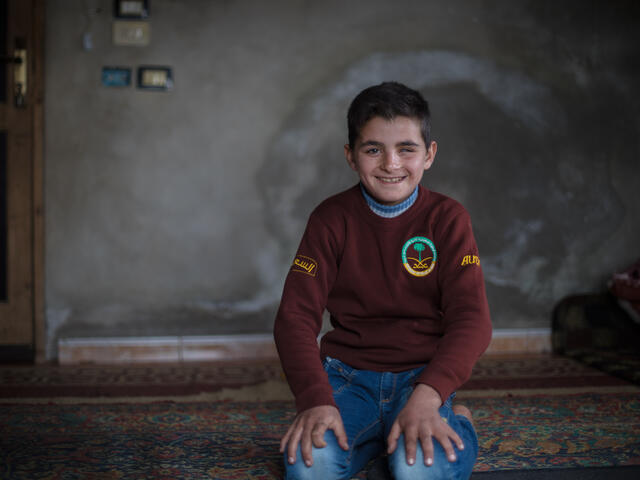 Both the twins are working hard in school to reach their dreams. “A beautiful day for me is when I pass my tests in school,” says Ali. “When we pass, we all feel happy and celebrate.”
Photo: Abdullah Hammam/IRC

“Despite the family’s hardships, Hassan has high hopes for his children’s futures. “I hope they grow up to be diligent and good and have a great future in society.”

“I like studying hard and scoring first in my class,” Sara says. “When I grow up, I want to become a doctor so I can treat patients” 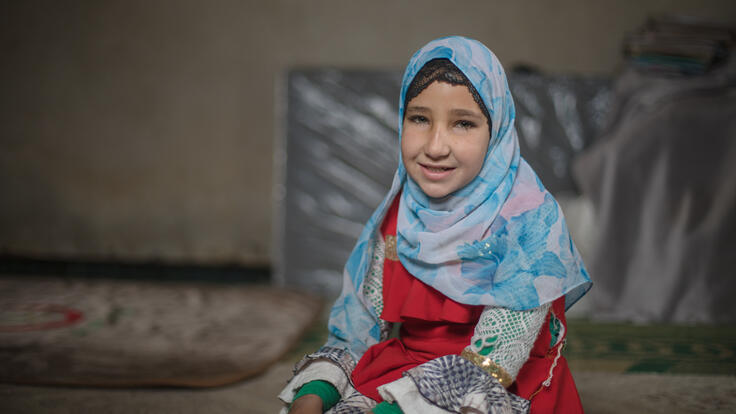 Sara longs for her home in Ghouta. “I have beautiful memories of our home, although I feel sad when I remember it,” she says. “My dream for the future is to go back to Ghouta and to become a doctor.”
Photo: Abdullah Hammam/IRC

Sara and her family have been displaced  around 14 times in seven years—although they no longer can be sure of the number of times they’ve moved. “At first, the children were hugely affected, but now they are coping,” says Sara’s father, Emad. Sara’s fondest hope is simply to return to the family’s home in Ghouta, a suburb of the capital Damascus.

“My daughters have missed out on three years of school,” says Emad. “Sara is 10 years old and she’s in the third grade. She should be in the sixth grade.”

“I want my children to have a good future and most importantly a good education,” says Emad, who worked as a truck driver before fleeing their home in Ghouta.
Photo: Abdullah Hammam/IRC

Emad’s hopes for his children are the same as any loving father: “I wish them success in life and better living conditions and their own houses in the future.” But life in Syria is uncertain, to say the least. “I’m proud of my children.… Thank God they’re good students, even if they missed out on a few years.” 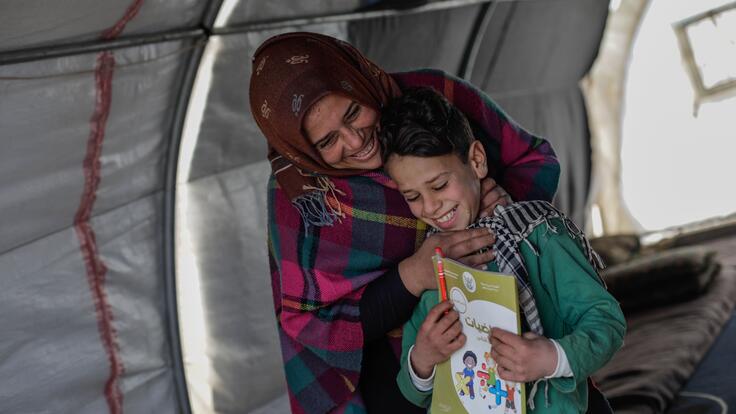 "Whenever I want to make my mother happy, I bring her a gift,” says Omar. “Every day I go and get firewood for our house. I also help her with everything at home.”
Photo: Abdullah Hammam/IRC

“I know how to swim and I love swimming as much as I like riding bikes,” says Omar. He is equally enthusiastic about learning, although displacement has disrupted his education—and the coronavirus pandemic only impacted it further. But Omar is very smart, says his mother, Sundus. “He always asks questions and doesn’t forget anything.”

“We thought we’d be back after two days, so we left just with the clothes we were wearing,” recalls Sundus about the family’s forced move. “But then we couldn’t go back because of the shelling. That was two years ago.” Sundus never imagined their family would become internally displaced—or that they would have to move two more times.

Now Sundus is anxious for her children to catch up and complete their studies. “We used to live on our own land,” she says. “Everything was available to us. Now we don't have a decent shelter. Our family has grown and so have our expenses.” 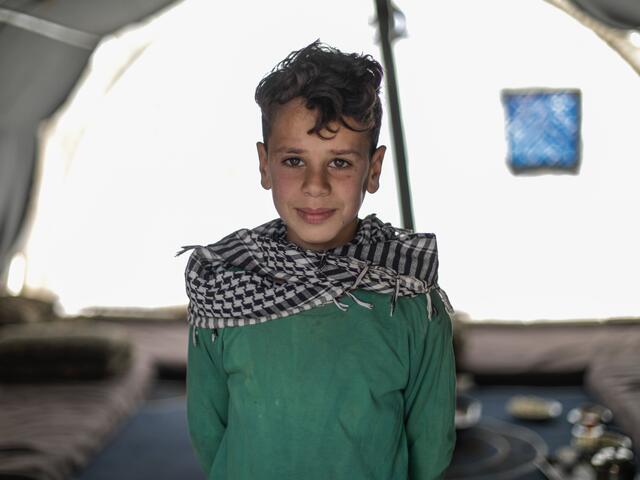 Omar hopes to continue a family tradition. “When I’m older, I want to sell fish like my father,” he says. “I’ll have my own shop. I want to do this because this is our profession—and I love to eat fish and catch them as well.”
Photo: Abdullah Hammam/IRC

Sundus works as an olive picker to help support her family. Until they can return home, they are doing all they can to support one another.

"When we’re together, we always talk about how we can help each other,” she says. Young Omar wants to do his part, too. “I want to sell fish like my father,” he says. “I want to do this because this is our profession—and I love to eat fish and catch them as well!”

“I dream of living a beautiful and happy life with no shelling, no killing and no war,” says Salam. Her mother, Ruba, has been able to support her family by producing soap, protecting her community from COVID-19. “What matters most to me is standing by my children.” 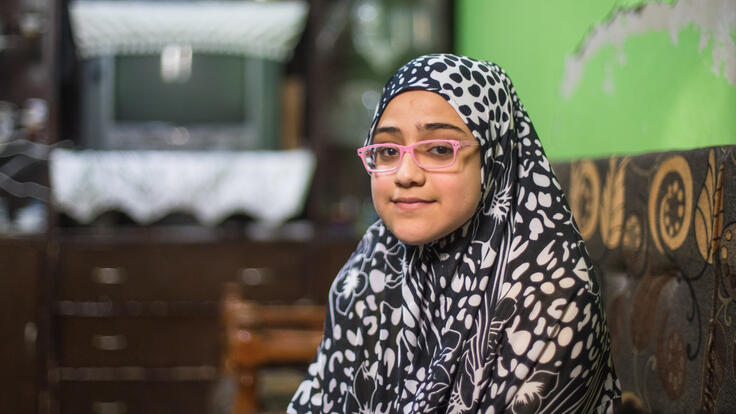 “My biggest hope is for the war to end and for everyone to return to their homes,” says Salam, “and for people to live happily.”
Photo: Abdullah Hammam/IRC

Ruba’s daughter Salam has missed a lot of schooling, but the 10 year old seems wise for her age. “I would like to tell the world to love each other, respect the elderly, and be kind to the young.”

Her mother echoes her daughter’s sentiments. “Every home or family is separated from each other,” she laments. “I hope for people to be reunited and for goodness to prevail.”

In the meantime, Salam is patiently working toward her goal. “I love drawing most,” she says. “I want to be an architect.” 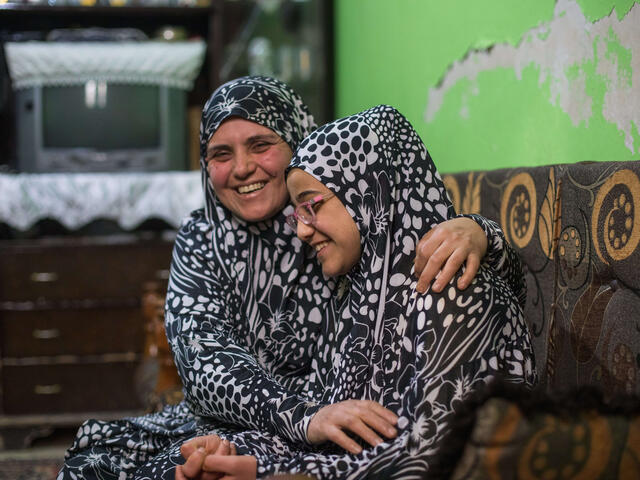 Like every mother, Ruba wants the very best for her children. “I wish them all success and good jobs and to be happy in their lives and achieve everything we couldn’t achieve.”
Photo: Abdullah Hammam/IRC

About the IRC in Syria

The IRC has been delivering aid in Syria since 2012.

The IRC currently supports 15 health facilities and 11 mobile clinics in northeast Syria. We reached over 227,000 people in camps, towns and rural communities in 2020.

In response to the pandemic, the IRC has continued uninterrupted health services by incorporating COVID-19 prevention and control measures. We are raising awareness of the pandemic through community outreach activities.

In addition to health care, the IRC works to protect and support survivors of violence and abuse with counseling and other services; safe spaces for women and children; and women’s empowerment and child protection programs in a number of camps and cities across the region. The IRC also provides legal support to displaced families and refugees and offers livelihoods training and cash assistance to those in need.

Supported by funding from the United Kingdom's Foreign, Commonwealth and Development Office (FCDO), the IRC is providing displaced people in northwestern Syria with work opportunities and cash grants to help them cover basic needs. This story was originally published by IRC-UK on March 12, 2021.