Refugees on the playing fields of America

As the 2016 Summer Olympics come to a close, refugee soccer players resettled in Baltimore reflect on their own dreams.

Temperatures soared above 90 degrees at the Vanguard Collegiate Middle School soccer field in East Baltimore, but the heat did little to dampen the energetic pace of the young players.

Reema Al Faheed, an ebullient 18-year-old, races down the pitch with obvious joy. She had spent most of her life in a displacement camp on the Iraqi-Syrian border.

Born and raised in a refugee camp in Nepal, Kailash Rai, 13, is equally quick on his feet and just as enthusiastic. 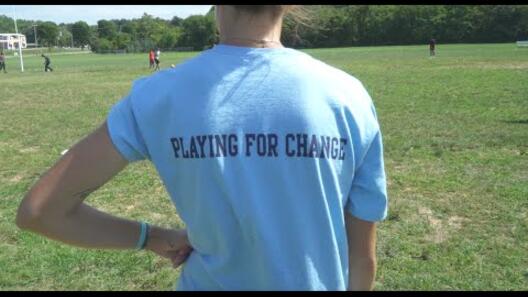 Video
A game without borders

Stories like these are the norm here. The players on the field have escaped everything from poverty and discrimination to war and famine. For them, soccer has become a shared passion, a sport that builds community as well as character.

These teenagers are participating in Soccer Without Borders (SWB), an international program that uses the sport to help resettled refugees and immigrants adapt and thrive in their new homes. The International Rescue Committee has resettled most of the players who take part in the Baltimore program.

The goal is to suceed

“Coaching a team of refugees is a lot more than coaching them on the soccer field,” says Kat Sipes, SWB coordinator in Baltimore. “It’s more about them realizing the opportunities they have in a new community, a new city, a new country, and understanding what they can do.”

Before a recent practice session, Sipes called her players together and asked them about the Summer Olympics in Rio de Janeiro. They talked about what it means for a team of refugees athletes to compete at the Olympics for the first time in its history.

“It shows we have opportunity,” said a teenager from South Sudan. 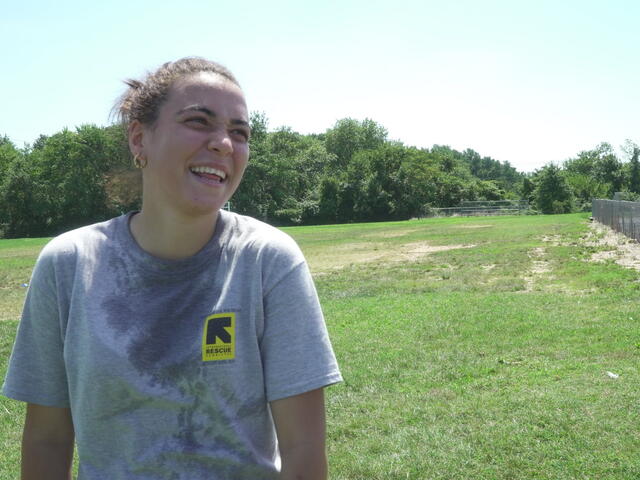 18-year-old Reema was resettled by the IRC from Iraq to Baltimore four years ago and has been part of Soccer Without Borders since middle school.
Photo: Sean Grossman/IRC

Soccer Without Borders came to Baltimore in the fall of 2009 to cater to the growing number of refugee youth being welcomed to the city. This year, 160 children and youth benefit from the after-school and summer program that helps build bridges across racial, cultural and religious divides.

The transition to life in America can be daunting for young people starting over. Reema, for example, comes from a conservative Arab family who frowned at the idea of her playing soccer with boys. But she remained resolute.

“I have never seen someone completely follow their heart, know what they want to do in life, and confidently stand up for themselves,” says Sipes. “She totally broke out of certain norms that were confining her and became a strong independent woman on and off the soccer field.”

Reema’s mother soon realized what soccer meant to her daughter.

“She didn’t approve at first,” Reema admits. “But then she saw that I wasn’t getting to experience much in my life, and was OK with it.”

I want Americans to know that refugees have no home. We’re here to get an education…and to be safe.

Born to Palestinian/Iraqi parents in Amman, Jordan, Reema was forced to leave her home at age five after her father was kidnapped because of his nationality. Upon his release, the family fled to a Palestinian refugee camp in Syria. Two years later, they were pushed out again to a displacement camp in Iraq, this time for six years.

“When I went to the camp for the first time, I used to cry every day because I didn’t like it,” Reema recalls. “I didn’t like going to school because the teachers would hit you. We didn’t have a lot of food. Tents would catch on the fire. But I tried to forget everything.”

With the help of the IRC, Reema and her parents, along with her two brothers, were resettled in Baltimore in December 2012. After nearly a decade of upheaval,  the family began to have a sense of home.

“The first thing I thought about was the house,” she says. “I lived in a tent for six years and I missed living in a house.” The IRC helped her family move into their furnished apartment and enroll the children in school. Reema wants to be a police officer after attending university. 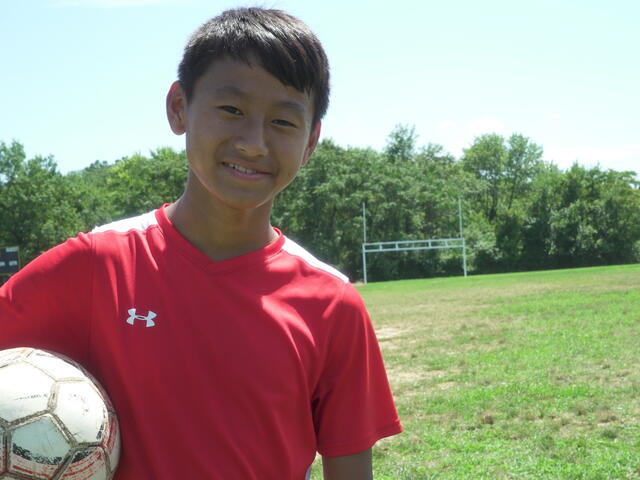 Kailash, 13, started playing soccer at a young age while growing up in a refugee camp in Nepal. He and his family were resettled by the IRC in 2012.
Photo: Sean Grossman/IRC

Kailash, the youngest of four children, was resettled by the IRC in 2012. His parents had fled ethnic violence in Bhutan in the early nineties. Growing up in a camp, refugee life was all he knew—until he arrived in Baltimore. Now he and his friends can focus on what makes them happy: soccer.

“Soccer is important to me because it helps me grow to be a better person,” says Kailash, a midfielder. “When I first came [to America], the hardest part was speaking English and getting along with the people here. Now, I feel like I’m getting along with people because I know their language.”

“Kailash is the type of person who was born to play soccer,” says Sipes. “He has never had a problem fitting in on the field, but he has really stepped up as a leader with the confidence to be a great role model for his teammates.”

Americans have welcomed refugees into the United States, but recent security concerns have generated a backlash that threatens to cut off the opportunities enjoyed by Kailash and Reema.

“I want Americans to know that refugees have no home,” she says. “We’re here to get an education…and to be safe.”