"When I became a refugee, I started thinking…where do I belong?"

When we meet someone for the first time, we often ask: where are you from? For Mulu Bahre, there was no simple answer. He felt he belonged neither to Eritrea, where he was born, nor Ethiopia, where he found himself a refugee.

"That's when I started thinking, ‘Who am I? Where do I belong?’” he confides. “And, when we [eventually came to the United States], we were still refugees, but for how long?… I didn’t want to feel like an outsider here. I was working, I was learning, living and contributing, but to where, to what?"

It wasn't until the 24-year-old became an American citizen early last year that he found the sense of belonging he yearned for, a new identity he wholeheartedly embraced.

"The day I was sworn in, I felt great joy, I felt that a huge burden was removed,” he recalls. "I know I belong here. I know that I'm accepted. I'm so thankful for this opportunity."

Mulu is sturdy and tall, with graceful almond eyes and an extraordinary attitude. His industrious and unflappable nature had brought him to this pivotal moment after five long years in exile.

At the age of 12, Mulu fled Eritrea to Ethiopia with his widowed mother and younger sister. At the time, many people, including Mulu’s two older siblings, were attempting to escape Eritrea’s forced conscription that can last indefinitely.

“People’s lives were extremely restricted,” he says. “There was no room to have any sort of future, no work, no education.”

Mulu’s mother did not know her children had crossed the border without the government’s permission; regardless, she was required to pay $1,000 in penalties. If she didn't comply, she would face prison. 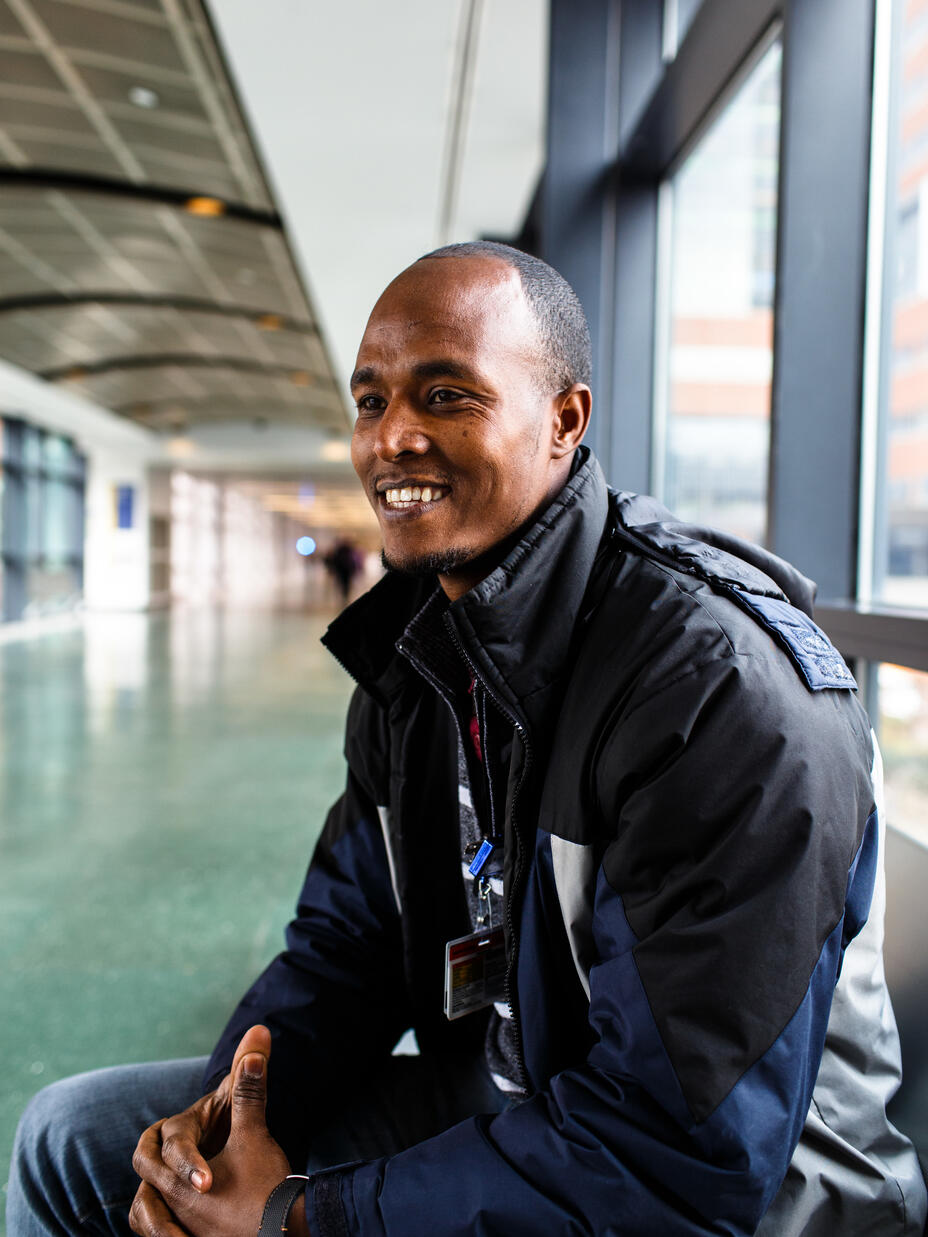 Mulu Bahre, 24, who was born in Eritrea, became an American citizen in January 2016, six years after the International Rescue Committee resettled his family in Baltimore.
Photo: Keith Lane/IRC

"The government was coming after people whose family members fled from Eritrea,” says Mulu. “They held the parents accountable for their children who crossed the border. But we lived on a farm and couldn't afford to pay. The only way my mom could save herself and her children was to leave the country."

Young Mulu lived in a refugee camp for five years, his days lived out in darkness. Mulu only likes to remember the few good memories of his childhood: playing soccer with his friends and having his family by his side. His dreams extended only as far as the camp's perimeter, but he refused to give up hope.

"I heard a story of somebody who eventually made it out and succeeded. So I just kept going to school, hoping the same would happen to me."

A new life in America

Mulu’s mother applied for refugee resettlement in 2007, but it wasn’t until two years later when the Bahre family was called by the United Nations for their first interview. After rigorous background checks and screenings, the family flew to the United States in March 2010.

The International Rescue Committee resettled the family in Baltimore, helping the Bahres secure an apartment, learn and adopt new lifestyles and customs, and eventually become citizens. Mulu, who was 18 when he arrived, was introduced to other refugees and immigrants who shared a similar narrative. He was also eager to meet his American peers. Making friends wasn’t always a positive experience: While he often was greeted with compassion and empathy, he also experienced hostility.

"I was teased and bullied in high school, which made me feel bad about myself. People didn't know I was a refugee, but they saw me as a different person."

Mulu redoubled his efforts to fit in, improving his minimal English and coaching his fellow students as a peer mediator. Playing three sports helped him acclimate to American culture. His peers began to look at Mulu as a leader and he was eventually elected senior class president, the first immigrant.

But of all the barriers he faced, the label “refugee” was the most difficult to overcome.

“There are moments, especially now, which remind me that I’m a refugee. I want people to see that there's more to a person than where they are from."

Mulu stresses the skills refugees bring to their new countries.

"There was a time when a lot of people I knew were ignorant or close-minded about refugees,” he explains. “When I shared my story and what I have accomplished so far, they changed completely. I now have a great relationship with a lot of the people."

Mulu has come a long way since his arrival in Baltimore. After graduating in the top three percent of his class, he earned a bachelor’s degree from St. Mary's College of Maryland. He now works as an anesthesia critical-care technician at the John Hopkins Hospital and hopes to enroll in the hospital's nursing program as another step toward his ultimate goal: earning a doctoral degree in medicine.

There are moments, especially now, which remind me that I’m a refugee. I want people to see that there's more to a person than where they are from.

"I come from a background where medicine and medical practice are underrepresented,” he says. “Public health in general is very poor. The only way that can change is if young people like myself pursue public health in all its forms and use it for positive change. I want to be part of the solution."

He expresses gratitude for the opportunity to develop his own potential, attributing his success to his family, teachers, friends and employers who loved him and helped in time of need.

"I had no idea I would be in this position,” he says “I felt like [my family was always] going to be struggling; I would not even finish school because it was going to be too challenging with the language and cultural differences. It's not over, though—I want to study more and become successful—but the path is open for me."