The poetry of hope: How one Syrian refugee overcame exile

Khawadah,* a Syrian refugee, has seen a lifetime of suffering. Like many women, she was forced to leave school to marry. Later, the war sent her into exile in Jordan. Despite such hardships, the 28-year-old refused to let her spirit whither, turning her sorrow into something meaningful, even beautiful.

She shares her story:

I loved going to school. Every year my family would decide that I should stop going to school, and every year I would insist and enroll. My stepmother and stepbrother didn’t like the idea of school, especially for a girl. They used to tell me that it is not appropriate for girls to go to school.

My teachers and friends read my poems, though, and they used to give me motivation to keep on writing. Everyone wants this motivation, this support. It would make me feel special, make me feel like I exist, like I matter.

Khawadah, 28, at her home in Mafraq, Jordan with one of her children.
Photo: Kaity Kawar/IRC

I studied until ninth grade, but my family would beat me often to stop me from going to school. So, I surrendered. I did buy high school books and tried to study on my own for three years.

When I was forced to marry, I felt that life has been shattered, so I burned all my notebooks, and I stopped writing for four years.

[When the war came to Aleppo], there weren’t any bombings or anything like that in our village yet, but everything became expensive. My husband stopped working. We were hungry and afraid. We used to live in my in-laws’ house, but they threw us out, so my husband and I ended up living in a cold little room. My family had already left for Jordan, so my father helped us join them here. We came here [to Mafraq], rented a house and settled in 2012.

Excerpt from Refugee of Hope

A nation without a home, broken, standing before injustices;
Torture, hunger, cold, fear and despair.

To run or to fight.
They decided to leave to other countries,
far from a war that has taken away everything, even emotions.

But they left their homes to face another kind of war.
Yes, it’s the war of survival, war of struggle, a war of existence.

I was relieved when we first came here. Jordan was safe and everything was available. We both started working for a little while. I worked in the fields, harvesting fruits and vegetables, until my ninth month of pregnancy. After I gave birth, I started working at different things—I was a domestic helper and cooked meals for families. Some employers are nice, but others treat me very badly.

Around four years ago, I came to the women's center run by the International Rescue Committee in Mafraq, when the center first opened. I had heard that there was a psychologist there who sits and listens to you, so I came. I returned a year later and received cash assistance, which helped us through a very difficult phase. I started attending group discussion sessions. 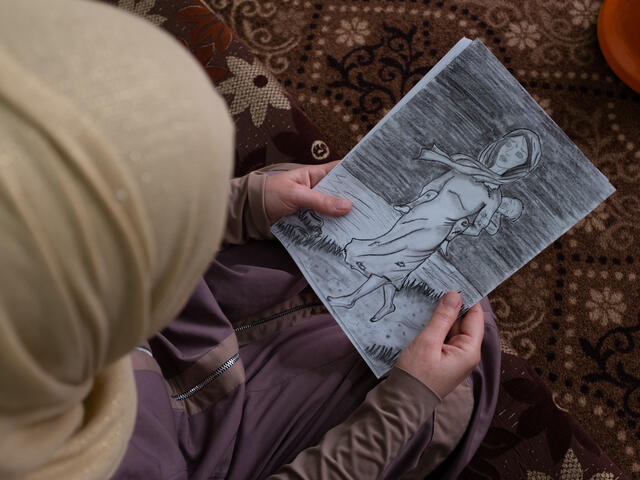 Khawadah, a mother of two, uses writing and drawing as a way to cope with her life as a refugee.
Photo: Kaity Kawar/IRC

After a couple of years, I came to the center again looking for a psychologist to talk to. I was going through very difficult times. I had started writing again. It was like I was hypnotized all this time and suddenly woke up.…I couldn’t believe the life I was living. I was thinking—is it possible that I am married and have children? How did this happen? I woke up in the middle of the night and wrote my first poem in years. I didn’t know how all of this happened and why I have been patient for so long. Why am I always hard on myself but treat others well?

I signed up [for counseling] and they called me to see Ms. Hana Abu Jalboush. It was hard for me to speak to Ms. Hana at first; I was hesitant. I didn’t know how she could help me. My friend advised me to get things off my chest, so when I went to Ms. Hana the second time, I told her everything—how I felt like I’m bouncing back and forth, that I didn’t know what I wanted.

Beautiful, cared for, she asks me about my life
Inside is a refugee, living without a homeland
Her questions are numerous, and my heart beat faster
I didn’t know what to tell her; deprivation humiliated me,
They stole my emotions, and left me with my sighs
A hanging lifeless swing, vulnerable... this is who I am
If I speak, I am silenced, and silence is obliviousness.

I think imagination is a gift. It’s a way to vent. If it weren’t for my imagination, a sensitive person like me would have never survived. When I write, I feel like myself, I feel my presence.

A lot of people have told me that my daydreaming, this imagination I have, will destroy me, but I refuse to listen…it’s what keeps me coping with the struggles of my life. It’s like a little room where I escape sometimes to feel like the real Khawadah; It’s a place were I feel comfortable and happy, and when I come out, I’m more positive.

I think imagination is a gift. It’s a way to vent. If it weren’t for my imagination, a sensitive person like me would have never survived.

I hope that my girls grow up to be their real selves and won’t ever have to be someone they’re not. I hope they fulfill their wishes and hopes in life. I also hope that I will be able to give them enough care so they don’t ever have to seek out love or approval from anyone else. I hope this never happens to my girls; I hope they live a better life.”

The IRC’s women’s protection and empowerment program in Jordan is supported with aid from the U.K. government and other generous donors.