Syria has all but collapsed as the country’s civil war enters its seventh year. On March 13, the International Rescue Committee released a new survey—the first of its kind—on Syrian children and learning.

The survey shows the terrible impact war has had on its youngest victims in Syria.

“Even in the middle of war parents still strive to ensure their children get an education,” says IRC president and CEO David Miliband.

Given that little to no information exists about children’s learning levels inside Syria, the IRC collected data that provides critical insight for other aid agencies struggling to create programs that meet the needs of students in appalling situations.

Among the key findings of the study: 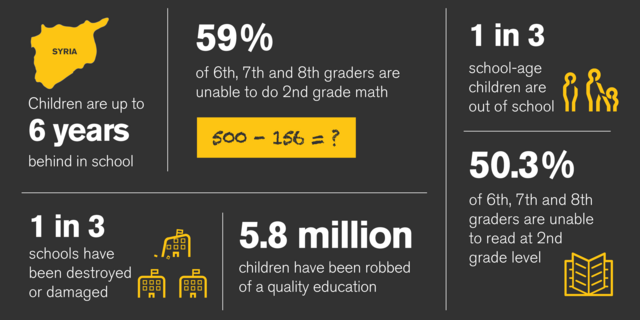 59 percent of Syrian sixth-, seventh- and eighth-graders are unable to solve a subtraction problem.

Nearly 3,000 school children attending five schools supported by the IRC in Idlib province in northern Syria were given math problems to solve. More than half of sixth-, seventh- and eighth-graders were unable to complete a simple subtraction problem—a second-grade math skill.

50.3 percent of Syrian sixth-, seventh- and eighth-graders are unable to read a short story.

Children were given a simple 7- to 10-sentence story in Arabic to read; half were unable to do so. In fact, seventh-grade boys were more than twice as likely as their female classmates to fail second-grade reading and writing tasks.

Nora is a little girl. Her mother gave her a book. It had lots of stories and nice pictures. Nora reads it every morning on her way to school. She learned many words. Her teacher was very happy. The teacher gave Nora another book. It had more stories. She showed it to all of her friends.

Syria’s children are mentally and emotionally shattered from years of war, which can lead to life-long psychological trauma and mental disorder. They have seen their families torn apart and witnessed loved ones suffer and die. Some have experienced injuries themselves or have had their homes destroyed.

As a result, even for those fortunate enough to attend school, toxic stress caused by experiences with conflict and displacement dramatically inhibits their ability to learn. 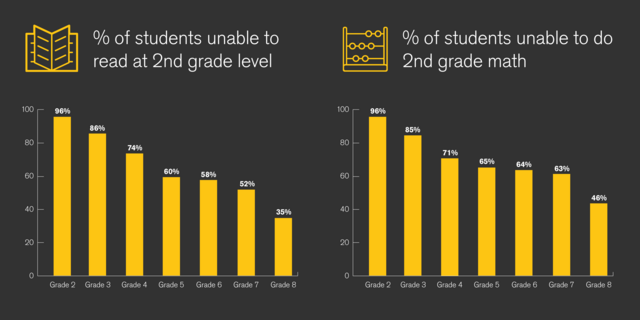 One third of the schools in Syria have been destroyed or damaged.

Since the beginning of the war, more than 4,000 attacks on schools and education facilities have been recorded and hundreds of thousands of education professionals have fled the country. Although some parents bravely send their children to school to ensure they are not deprived of an education, many fear it is still too dangerous.

One third of Syrian children do not attend school.

It is no surprise that, under these conditions, Syrian children are dropping out of school daily. Approximately 1.75 million children and youth do not attend classes, with many more at risk of dropping out—one of the worst school enrollment rates in the world. Prior to the outbreak of war, Syria’s school attendance rate was close to 100 percent, according to the United Nations.

5.8 million children in Syria have been robbed of a quality education.

"We are storing up huge problems for tomorrow if we do not give Syrian children the resources they need to heal, develop and thrive,” says Miliband.

But with the right support, children can recover.

In response to the challenges outlined in this survey, the IRC is providing social-emotional learning opportunities for Syrian children to develop basic cognitive skills to improve memory and to build skills that encourage perseverance, controlling ones emotions, positive social interactions and conflict resolution.

The IRC supports five schools in northern Syria, where children take part in classes including Arabic, math, and social and emotional learning classes, to help them recover and develop the life-long skills.