What are some of refugees’ greatest contributions? Test your knowledge.

When conflict or crisis forces them to flee their home, refugees can only carry so much.

But refugees bring so many intangible gifts to their new communities: hopes and dreams, experiences and talents, traditions and family stories, resilience and determination….and some ingenious inventions.

This World Refugee Day, learn more about refugee contributions through the quiz below.

Which trillion-dollar technology company was co-created by a refugee who fled Russia to escape growing anti-Semitism?
Correct Answer
Incorrect Answer

Google co-founder Sergey Brin was born in 1973 in Moscow, Russia. He and his family fled to the United States in 1979 to escape anti-Jewish persecution in their country. Brin went on to study computer science at the University of Maryland and Stanford University, where he met Larry Page. Brin and Page joined forces in 1998 to found Google, now the world’s most popular search engine and a media giant that owns YouTube, one of the world’s biggest video hosting platforms.

Which loveable Disney character is part of a family who were displaced after violence forced them to flee their home?
Correct Answer
Incorrect Answer

Disney’s Oscar-winning animated film Encanto follows three generations of the Madrigals — including protagonist Mirabel — who were forced to flee their village to a safer space in Colombia (a country that today serves as a haven for people who have had to leave neighboring Venezuela). The family thrives in their new home and, with the help of some Disney magic, illustrates the unique contributions that refugees bring to their new communities.

Charise Castro Smith, one of Encanto’s three co-directors, told the magazine Backstage, “I’m Cuban-American. My grandparents on my mother’s side came over when they were in their early 30s from Cuba. I understand that a new start is both a boon and a challenge.” She continued, “Both opportunity and trauma influenced our family—me, my brother, and my cousins’ lives. I wanted to explore that in this movie.”

While completing his doctoral dissertation at the University of Michigan, Nigerian refugee Philip Emeagwali achieved breakthroughs that helped lead to the development of____.
Correct Answer
Incorrect Answer

The Internet owes much of its existence to Nigerian refugee Philip Emeagwali, who created a formula that allowed a large number of computers to communicate at once. Born in 1954, Emeagwali had to drop out of school because his family couldn’t afford it, but he earned multiple degrees after immigrating to the United States. While completing his doctoral dissertation at the University of Michigan, Emeagwali realized that he could use thousands of microprocessors to do the job of eight expensive supercomputers, inventing a practical and cost-effective way for machines to share information across the world. Emeagwali earned more than 100 prizes for his discovery, and his technology has been used by the oil industry and Apple computers.

Which quintessentially British dish was likely brought to the United Kingdom by Spanish and Portuguese refugees during the 16th century?
Correct Answer
Incorrect Answer

Fried fish was likely brought to the United Kingdom by Spanish and Portuguese refugees during the 16th century. French protestants known as Huguenots, fleeing religious persecution in the 17th century, might have brought their taste for fried potato with them to the UK. Joseph Malin, an Ashkenazi Jew, later combined the two—opening the UK’s first fish and chip shop, in London’s East End, around 1860. Although history tells us little about Malin’s early life, Ashkenazi Jews were heavily persecuted in Eastern Europe and Russia around this time.

Ilhan Omar, a refugee and the first Somali-American ever elected to the United States Congress, represents a Congressional district in which U.S. state?
Correct Answer
Incorrect Answer

Born in Mogadishu, Somalia as the youngest of seven siblings, Ilhan Omar now represents Minnesota’s 5th District in the U.S. Congress. Omar became a refugee at the age of 8 when Somalia’s civil war broke out and her family fled to Kenya. There, they spent four years in a refugee camp before being resettled in the U.S. in 1995. Representative Omar calls for greater support for and inclusion of refugees in American society. She says, “[Refugees] are humans who deserve opportunity and who — when given that opportunity — will live to our fullest potential.”

Which famous theory was created by a refugee who fled Nazi Germany for safety in the U.S.?
Correct Answer
Incorrect Answer

Physicist Albert Einstein published his theory of special relativity in 1905 and his theory of general relativity in 1915. Years later in 1933, he and his wife Elsa were forced to flee Nazi Germany for safety in the U.S. Einstein’s theories revolutionized physics and transformed the way we understand space and time. Scientists have used these theories to study black holes, supernovas, changes in orbit and electromagnetic radiation. Einstein was also a humanitarian, having inspired the founding of the organization that became the International Rescue Committee.

Poet Warsan Shire was born in Kenya to Somali refugees and raised in London. Which international superstar featured her poetry on a hit album?
Correct Answer
Incorrect Answer

Warsan Shire was featured in Beyonce’s acclaimed 2016 album, “Lemonade.” Known to many as “a compelling voice on black womanhood and the Africa diaspora," Shire started writing poetry as a teenager and was honored as London's first-ever Young Poet Laureate in 2014. One of her poems, “Home,” became a rallying cry for refugees and those who support them:

no one leaves home unless

home is the mouth of a shark

you only run for the border

when you see the whole city running as well.

In 1920, Russian refugee Adolph Levitt made a living selling doughnuts at his bakery in NYC. Pressured by hungry theatergoers to churn them out faster, Levitt invented the first doughnut machine that year. He used the machine to make millions, selling wholesale deliveries to bakers around the US. By 1934, doughnuts were billed as “the food hit of the Century in Progress,” and even handed out by the Red Cross in World War II. The automated process of creating doughnuts eventually helped build U.S. empires like Krispy Kreme and Dunkin’. 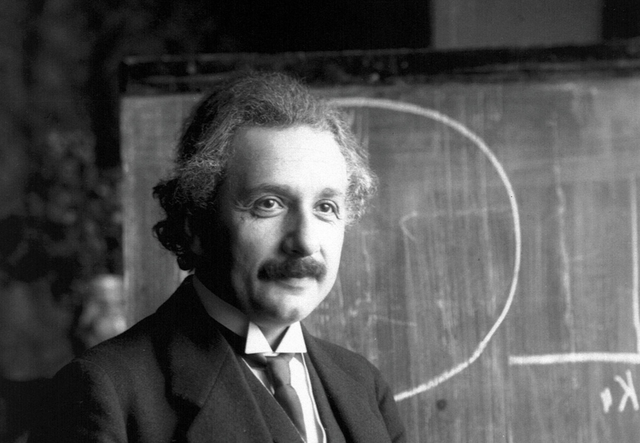 Physicist Albert Einstein, who created the Theory of Relativity, settled in the United States after escaping Nazi Germany.

This past year millions of people in Afghanistan and Ukraine were forced to flee their homes at a moment’s notice. Meanwhile, crises in countries like Syria, Ethiopia and Venezuela persist, resulting in a record-high 100 million people displaced globally. Learn more.