What it’s like to be a mother fleeing Ukraine

Two months ago, sisters Marta* and Oksana* lived peaceful lives in the same Ukrainian town where they were born, married and spent their entire lives. They both have young children–four between them, ages 9 to 15–and their families were happy, content and prosperous. But when the Russia-Ukraine conflict erupted, they witnessed violence they never imagined; and they made the sudden and difficult decision to abandon everything they’ve ever known, and to seek safety with their children.

This is their story. 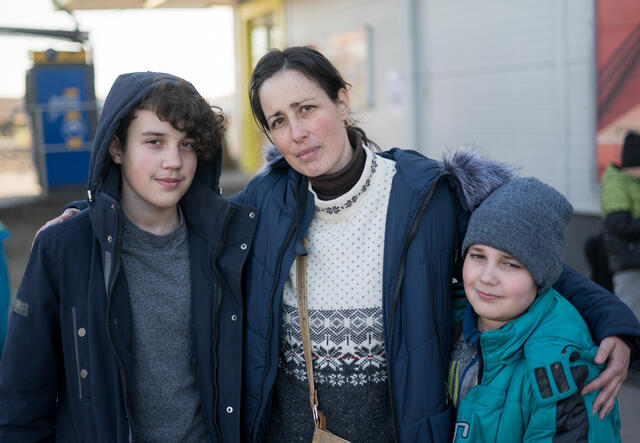 “When we heard the plane, we were trying to hide the kids in the basement, but the basement was not big enough for everybody to get into. The adults were just laying down on the ground and praying," Oksana said about the sisters' last days in Ukraine.
Photo: Andrew Oberstadt/IRC

Marta* and Oksana* had been content living in the town where they both were born. Their husbands had good jobs, and the families lived in comfortable homes. Marta’s eldest daughter was in her last year of secondary school, and was beginning to look at further education. They had everything they needed; food on the table, a roof over their heads, and the comfort of being together as a family.

When conflict erupted on February 24, life changed in a day. Staying in their hometown, near the border with Belarus, would be dangerous, but the sisters decided to stick together with their children, no matter what. That very evening, Oksana packed up a small bag of belongings for herself and her two children and went to stay with Marta.

“When we were leaving for my sister’s house, we thought we would be back, so we just took a couple of things with us,” she recalls. “When I’m thinking about it now, I would probably have taken something else. We left everything there.”

She continued, “what I have left from my previous life is this bag.”

The scariest things are the helicopters and planes, when you hear them flying at night.

Staying together under one roof helped, but the escalating violence was making life in the town untenable. After first, the sisters tried to make the most of it, attempting to ignore the gun shots while tending to their garden. But bombs were destroying buildings and shattering window glass everywhere. Electricity had been cut off, so there was no heat. Residents had limited access to water, food and cellular service. Marta notes the critical services that were destroyed, including hospitals, a factory and water pumping stations.

“The scariest things are the helicopters and planes, when you hear them flying at night,” says Oksana. “When we heard the plane, we were trying to hide the kids in the basement, but the basement was not big enough for everybody to get into. The adults were just laying down on the ground and praying.” 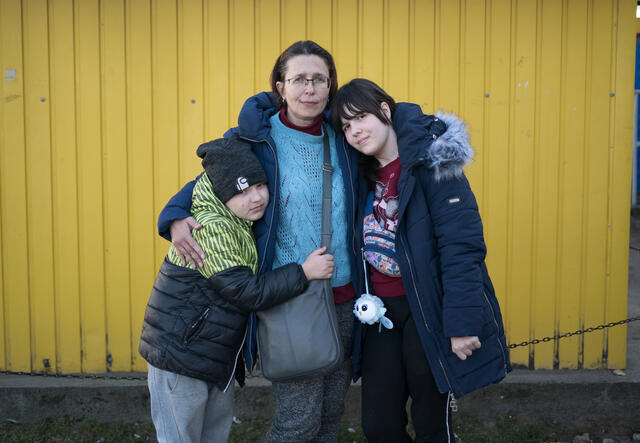 “We decided we need to protect our children,” Marta said about the sisters' decision to flee Ukraine, even if it meant leaving their husbands behind.
Photo: Andrew Oberstadt/IRC

With devastating sadness, the sisters realized they had no choice but to leave their hometown.

“We decided we need to protect our children,” says Marta.

Their husbands drove the families to the border with Poland, a perilous journey: night curfews limited their drive time to daylight hours and making a wrong turn could end in getting shot or dragged from the car. The trip took five days. Along the way, they witnessed burned out cars and sections of the road destroyed by explosions.

At the border, the sisters parted with their husbands, who returned to Ukraine, not knowing when the families would be reunited. 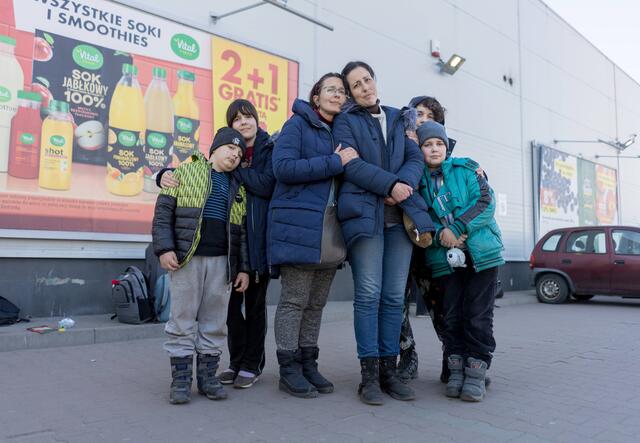 In Poland, Marta and Oksana were heartened by the outpouring of support from people who had traveled from across the globe to help refugees like themselves. “They were offering us water, food, clothes,” says Oksana. “I would like to thank all of the people who are helping us. Thank you.”

What keeps the two mothers going is the hope that they will have the chance to rebuild their lives. “We just didn’t have a choice but to leave. We would never have left our husbands. We just want to save the children,” Marta emphasizes. “Everyone [from Ukraine] is supporting one another like one big family. But we desperately want to go back. We are going to win this war and we will be back. We are going to rebuild everything. We will rebuild our country.

*Name have been changed for security. 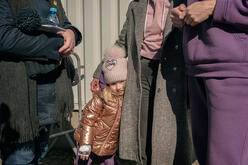 A young girl forced to flee Ukraine. Over 5.5 million refugees have left the country since the conflict began.
Photo: Francesco Pistilli/IRC

Over three million people, mostly women and children, have left Ukraine for Poland. According to the United Nations, two thirds of children in Ukraine have been displaced from their homes. Many have experienced trauma and are in urgent need of specialized support and care. Women and girls are especially vulnerable to exploitation and abuse in times of crisis.

The IRC is working with local partners and the Polish government to put in place services for children who are traumatized. In partnership with Polish Center for International Aid (PCPM), for example, we are providing cash support to families living in cities across Poland, including Lublin, Gdańsk, Łódź, and Poznań, to ensure they are able to buy essential supplies like food, medicine and clothing for children. Meanwhile, our teams are working with local partners and the Polish government to set up Safe Healing and Learning Spaces across nine shelters in Warsaw, which will provide families, and children in particular, the space they need to recover from the trauma they have endured.