Why is the monsoon season so dangerous for Rohingya refugees in Bangladesh?

Since August 2017, nearly 700,000 Rohingya refugees have fled Myanmar to neighboring Bangladesh, putting a huge strain on the country’s already limited resources. In addition, the Bay of Bengal region of South Asia is prone to devastating natural disasters, including monsoons.

What is the monsoon season?

The full monsoon season in Bangladesh runs from May to October, with the first rains falling in April. Already, the first rains in the refugee camps near Cox’s Bazar, southeast Bangladesh, have turned roads into muddy paths and streams. Meteorologists are predicting more than 23 inches of rain in the month of July alone—six times the wettest month in New York.

What are the main dangers of this year’s monsoon season?

The Rohingya refugee population in the Bangladesh camps has tripled since last monsoon season. Between 100,000 and 150,000 refugees are at extreme risk, living in flimsy shelters in areas prone to flooding and landslides. Hundreds of thousands more will likely be cut off from lifesaving services by rising water. About one third of the health posts in the Kutupalong-Balukhali mega camp will become unusable—a situation that may prove fatal for the most vulnerable refugees. 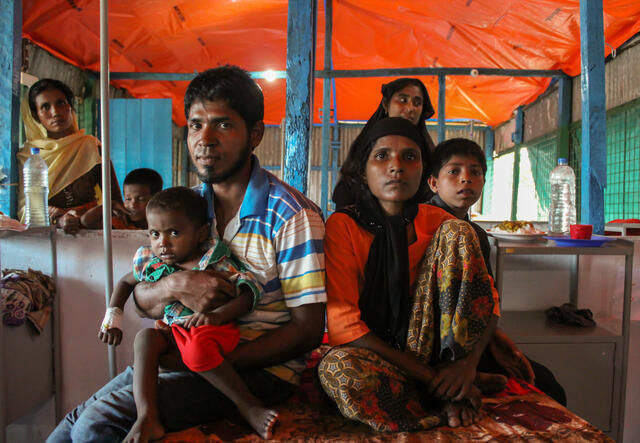 Why are homes so likely to be destroyed?

Refugees have built makeshift shelters from available materials, such as bamboo and tarpaulin, which will not stand up to lashing rain and heavy wind. The new arrivals had no choice but to strip the land of vegetation, even roots, to use as fuel, making the ground susceptible to erosion and posing a serious risk of landslides on overcrowded hillsides.

Satellite images of before and after the arrival of 700,000 Rohingya refugees in Bangladesh. Trees have been replaced by shelters, putting thousands at risk from landslides as monsoon rains arrive.

Why will the monsoon season bring disease?

Of particular concern is the proliferation of disease exacerbated by flooding and stagnant water. January saw a diphtheria outbreak sweep through the population, affecting some 6,600 refugees. A comprehensive vaccination campaign managed to contain the epidemic, but extreme weather, overcrowding, and the lack of functioning health facilities presage a public health emergency. Cases of cholera and hepatitis A and E are predicted to skyrocket in coming months. The International Rescue Committee is stepping up mobile medical teams to support people in hard-to-reach areas.

What is the risk of a cyclone?

In May 2017, Cyclone Mora swept across the region, hitting Rakhine State, Myanmar and Cox’s Bazar with her full fury and creating the worst landslide disaster in 10 years. The cyclone destroyed 50,000 buildings and a quarter of the makeshift settlements in Bangladesh, and ravaged camps for internally-displaced Rohingya in Rakhine. Some three million people were affected by the storm. 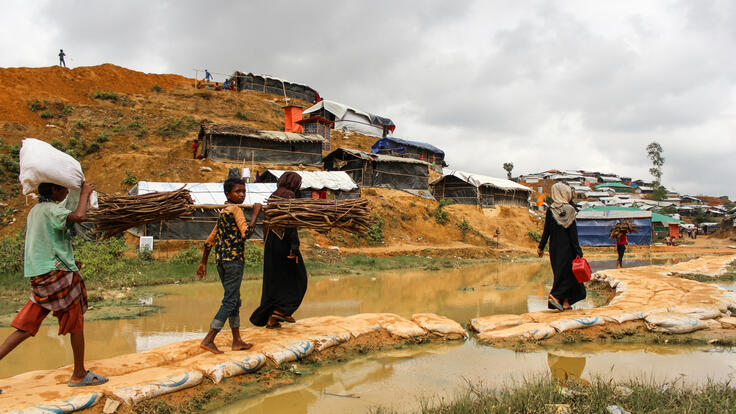 Now the world’s largest stateless people, the Rohingya live in dangerously overcrowded refugee camps in Cox’s Bazar, Bangladesh, where basic services are stretched beyond their limits. 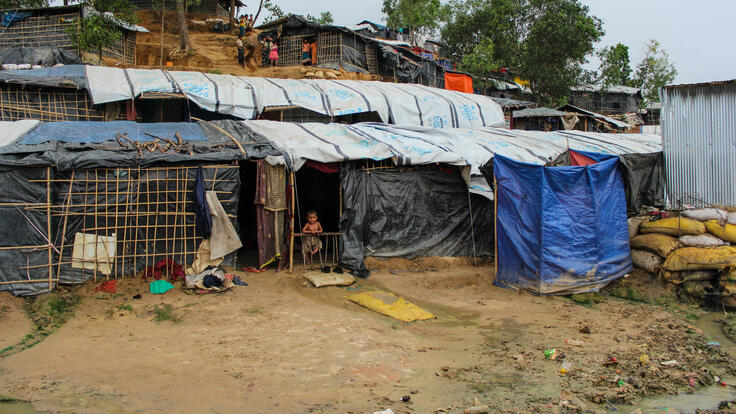 The refugees have had to fashion shelter from bamboo, tarpaulins and other materials they find around the camps.These flimsy structures will not be able to withstand the lashing rain and high winds of monsoon season, which lasts from May to September. 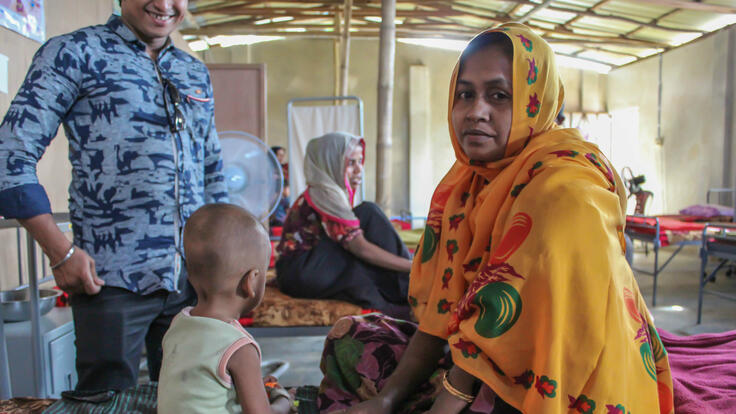 "In the camp where I live, my home is made of plastic tarps," says Khalida (not her real name), 35. "Our main challenge we face day to day is getting enough food—but for my children, it’s health." The International Rescue Committee treated Khalida's youngest child for severe malnutrition. 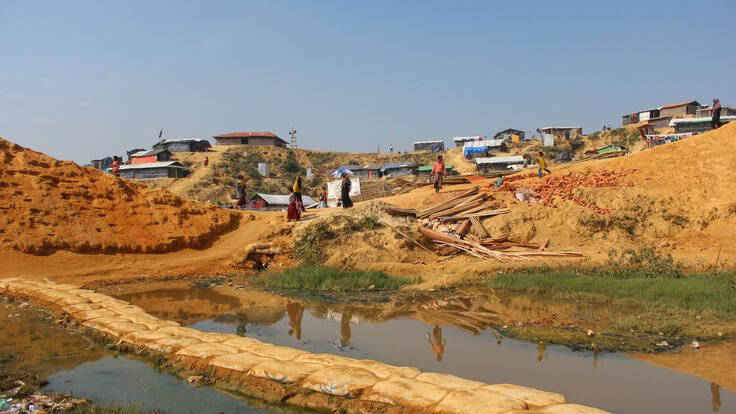 Refugees have no choice but to scavenge the surrounding hillsides for roots and other vegetation that can be used as cooking fuel. This makes the ground unstable and poses a serious risk of landslides. 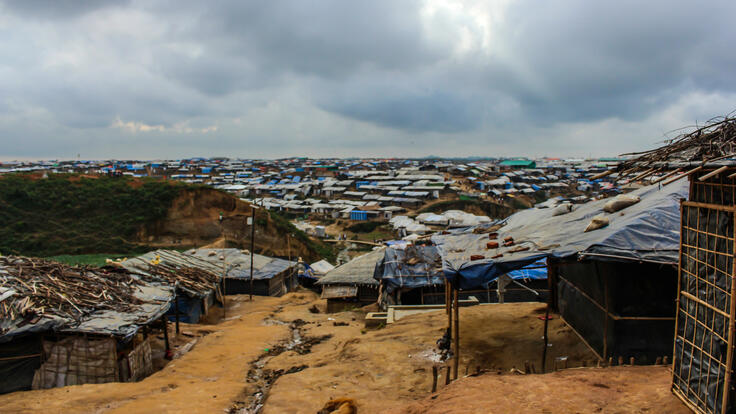 Families are struggling to survive without enough food, medicine or even toilet facilities.The monsoon rains will cause latrines to flood and contaminate water sources. Dengue fever, hepatitis and diarrhea could sweep through the camps. 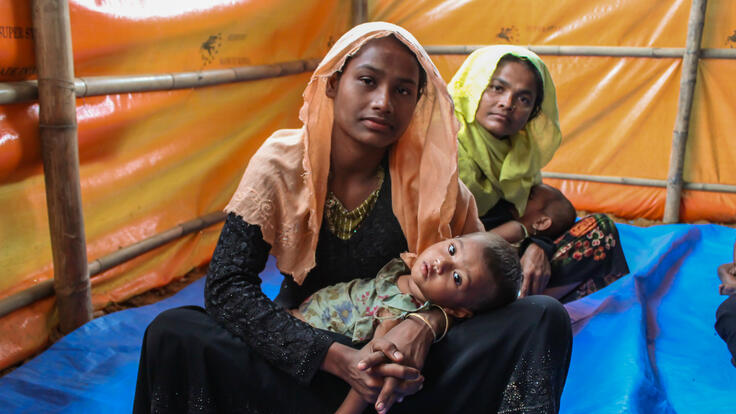 The IRC and our partners in Cox’s Bazar are focusing on health care and the protection of vulnerable women and children. We’re ramping up our response as the looming monsoon threatens to create a public health emergency. 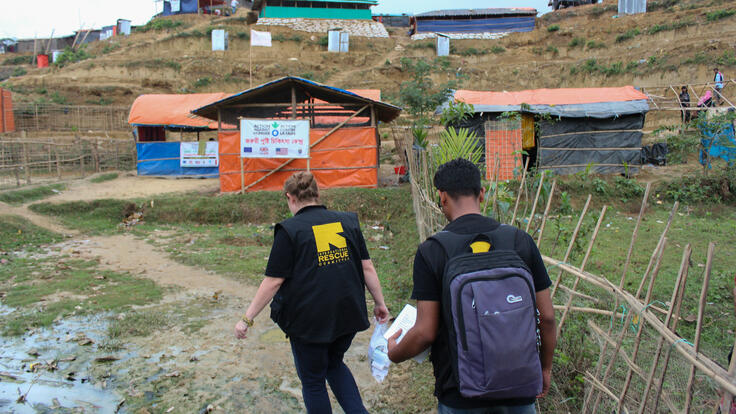 As the rains set in, hundreds of thousands of people will likely be cut off from lifesaving services by rising waters. IRC mobile medical teams will serve refugee communities whose health facilities have been shut down by flooding or landslides. 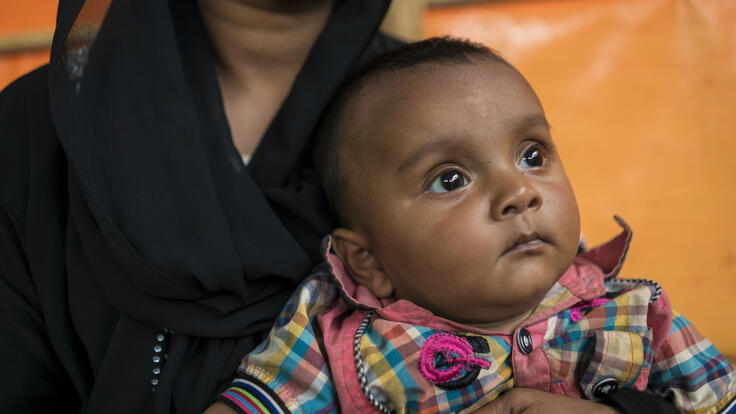 Bangladesh is also prone to other devastating natural disasters, putting refugees further in danger. In May 2017, Cyclone Mora made landfall in Cox’s Bazar, destroying a quarter of the Rohingya refugee settlements. Learn more about the IRC’s work in Bangladesh.