Yemenis suffer from largest humanitarian crisis in the world

17 million face starvation as the world looks away

Conflict and insecurity are the main drivers of the situation in Yemen. Civil war – roiling for nearly two years – has crippled the agricultural sector, driven up unemployment, impeded imports of staple food and humanitarian assistance, and sent food and fuel prices soaring. Ongoing conflict has also made it difficult for aid agencies to reach those in need with lifesaving supplies.

In 2012, political instability led to acute food shortages in Yemen, leaving almost half of the population in need of emergency food assistance. Five years later, warnings have still not been heeded.

The crisis in Yemen is not an accident, it’s the result of a failed peace process. The international community’s inability to secure political solutions to the conflict has left the population fighting for their survival; not only from war but now from starvation too

Insecurity, severe drought, and an exponential increase in food prices have left 30 million people in Yemen, South Sudan, Somalia, and northeastern Nigeria critically food insecure. A key challenge across these regions is humanitarian access as ongoing violence continues to make it difficult to reach those most in need.

In Yemen, fighting rages on without regard for civilian safety and with deliberate efforts to block vital supply routes. Yemen imports around 90% of staple foods yet the main port of Hodeida faces imminent bombing, which would also cripple humanitarian and commercial operations.

Until earlier this month, the airport in the port city of Aden did not have humanitarian air service which meant that, to travel from the Capital Sana’a to the South, aid workers had to apply for a visa, fly to neighboring Djibouti, then get a 16-hour boat ride across the Red Sea.

Having strongly advocated for an improved route, the IRC welcomes the news that humanitarian flights have resumed into Aden from Djibouti, which will have a significant impact on famine-relief efforts. However, the IRC continues to call for a direct humanitarian air service between Sana’a and Aden.

As the second anniversary of the conflict approaches, the IRC is calling for an immediate ceasefire so that aid agencies can access all areas of Yemen, unimpeded, to provide lifesaving humanitarian aid. This is critical at a time when the United States plans to cut foreign aid by nearly one third while the UN response plan is currently only 7% funded with a massive shortfall of US$1.9bn. An urgent increase in funding is required to meet the desperate needs of the population.

The IRC reclassified the crisis in Yemen to its highest levels and is scaling up work, working through partners to respond to nutrition and health needs in affected areas in the North and South and distributing cash vouchers for civilians to buy food in places where humanitarian access is less possible. 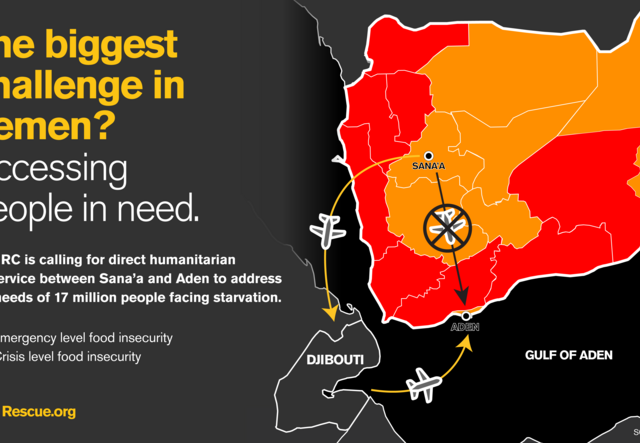