Evaluation of handheld solar lights among displaced populations in Haiti 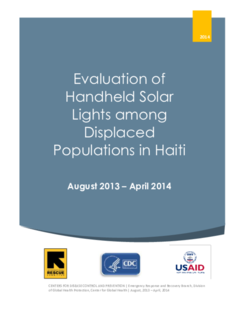 As of March 2013, an estimated 347,284 individuals displaced during the 2010 earthquake remain in 450 IDP sites across Haiti. The International Rescue Committee (IRC) assessments of GBV in Haiti in 2012 identified numerous issues for women and girls living in displaced camps; issues included increased vulnerability to violence and susceptibility to exploitation, and obstacles to accessing quality medical and case management services for survivors of sexual violence and other forms of GBV. As part of the US National Action Plan on Women, Peace and Security (NAP), IRC with support from the US Centers for Disease Control and Prevention (CDC), distributed handheld solar lights to all households in two camps, Camp Toto and Camp Rue de Nimes/Sinai during August 2013.

The goal of the evaluation was to evaluate the use and benefits of handheld solar lights and to explore sense of safety among females aged 14 years and older living in two IDP camps in Port-au-Prince, Haiti. The objectives of the evaluation included the following: