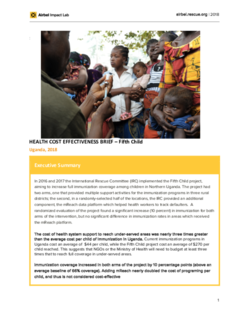 In 2016 and 2017 the International Rescue Committee (IRC) implemented the Fifth Child project, aiming to increase full immunization coverage among children in Northern Uganda. The project had two arms, one that provided multiple support activities for the immunization programs in three rural districts; the second, in a randomly-selected half of the locations, the IRC provided an additional  component, the mReach data platform which helped health workers to track defaulters.  A randomized evaluation of the project found a significant increase (10 percent) in immunization for both arms of the intervention, but no significant difference in immunization rates in areas which received the mReach platform.

The cost of health system support to reach under-served areas was nearly three times greater than the average cost per child of immunization in Uganda. Current immunization programs in Uganda cost an average of  $44 per child, while the Fifth Child project cost an average of $270 per child reached. This suggests that NGOs or the Ministry of Health will need to budget at least three times that to reach full coverage in under-served areas.

Immunization coverage increased in both arms of the project by 10 percentage points (above an average baseline of 66% coverage). Adding mReach nearly doubled the cost of programing per child, and thus is not considered cost-effective.