Life in the margins: Re-examining the needs of paperless people of post-conflict Iraq 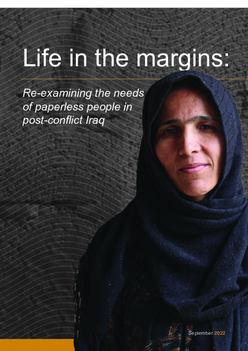 Report: Life in the margins: Re-examining the needs of paperless people of post-conflict Iraq

Five years after the end of the conflict with the Islamic State (ISIS) in Iraq, many communities remain in need of humanitarian and longer-term assistance on the path to achieving durable solutions. Among those most vulnerable are the nearly one million internally displaced and returnee Iraqis who lack key civil documents, such as marriage and birth certificates, and national ID cards. Without these documents, populations can lack legal status and face challenges accessing services such as social welfare, education, and health care. Missing documentation also excludes Iraqis seeking to rebuild after conflict from accessing the formal labor market or applying for compensation schemes. Protection risks are multiplied for those lacking legal identification.

The report, Life in the Margins, builds on the 2019 research report Paperless People of Post-Conflict Iraq and identifies the ways in which challenges to accessing civil documentation have evolved. While there has been progress by a broad range of actors to support Iraqis in accessing legal identification, systemic challenges and policy-level barriers remain. These obstacles have an outsize effect on specific groups including female-headed households, families with perceived affiliation to ISIS, and internally displaced people.

The report is informed by the programmatic experience of seven aid groups, which include International Rescue Committee (IRC), the Norwegian Refugee Council, the Danish Refugee Council, and others, across nine governorates in Federal Iraq and the Kurdistan Region of Iraq (KRI).