The right to the city for urban displaced 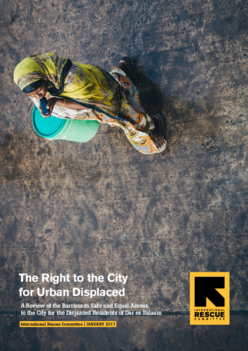 Report: The right to the city for urban displaced

Urbanization is changing the nature of humanitarian response.

As urbanization continues, these refugees increasingly find themselves in competition with economic migrants and with long-term urban residents for access to public services and economic opportunities in cities and towns. The struggle of urban dwellers to access services and economic opportunities is best encapsulated using Henri Lefebvre’s concept of the Right to the City, which provides a social lens through which to analyze the relative enjoyment of rights and access that different marginalized populations have to the city.

Humanitarians responding to displacement crises in urban areas, therefore, must take particular care to ensure that displaced populations and vulnerable communities alike enjoy the Right to the City to the same extent as all other urban dwellers. This is particularly important in reference to their ability to safely and fairly access public and social services and opportunities for sustainable self-reliance, as well as to avoid social discrimination and exploitation based on their race, ethnicity, religion or culture.

With this goal in mind, this report presents an analysis of the challenges that displaced populations face in accessing services and achieving self-reliance in  Dar es Salaam, Tanzania, a developing and fast-growing city. The findings and recommendations, intended primarily for humanitarian actors, are derived from qualitative research conducted in Dar es Salaam between March and October 2016. This research draws upon the perspectives and experiences of urban displaced, Tanzanians, local and national government, and organizations directly involved with urban refugee programming in the city.