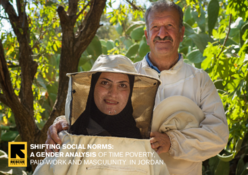 In 2018, the International Rescue Committee assisted over 120,000 Syrian refugees and low-income Jordanians to access healthcare, protection, education and income generation opportunities. One of the recent changes that IRC staff have noticed is that Syrian women are taking on more of an income earning role than was the norm back in Syria and that this is creating changes in household dynamics.