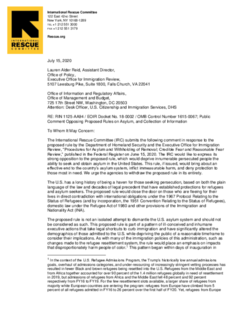 The International Rescue Committee submitted a comment in response to the proposed rule by the Department of Homeland Security and the Executive Office for Immigration Review, “Procedures for Asylum and Withholding of Removal; Credible Fear and Reasonable Fear Review.” The IRC expressed its strong opposition to the proposed rule, which would deprive innumerable persecuted people the ability to seek and obtain asylum in the United States. If issued, the rule would bring about an effective end to the country’s asylum system, inflict immeasurable harm, and deny protection to those most in need. The comment urges the agencies to withdraw the proposed rule in its entirety.