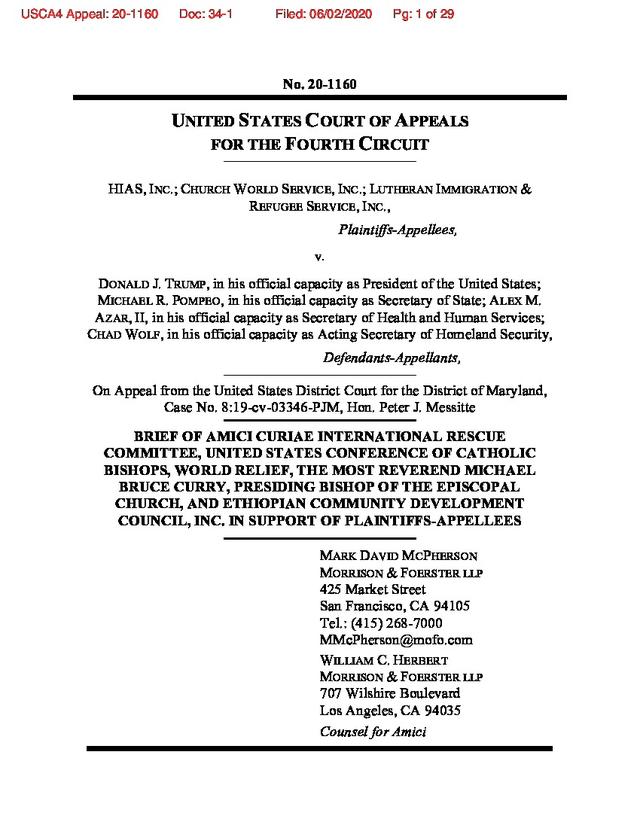 In September 2019, President Trump signed EO 13888, formally known as “Enhancing State and Local Involvement in Refugee Resettlement.” This executive order gives state and local governments the ability to refuse refugees. It would require the Department of State to obtain written consent from state and local officials before moving forward with refugee resettlement in their jurisdictions. The Department of State set a January 21 deadline for resettlement agencies to provide initial proof of state and local consent from hundreds of jurisdictions around the country. Refugee resettlement was expected to proceed only in areas where officials had provided written consent by June 2020.

This change upends the US refugee resettlement program as it has existed for almost 40 years. As opposed to a consistent, national system outlined in the Refugee Act of 1980, it would result in a chaotic patchwork of policies and processes that would negatively impact refugees and the communities that welcome them. It also ignores the existing close collaboration with state and local partners and resettlement agencies, and creates bureaucratic new procedures for state and local officials.. A lawsuit filed in November 2019 against the executive order was brought by HIAS, Church World Service and the Lutheran Immigration and Refugee Service. In January 2020, Judge Peter J. Messitte of the Maryland District Court issued a temporary, national halt on the implementation of the order. The government appealed, and the case is expected to be heard this fall; until then, resettlement can continue as it has been around the country.

The International Rescue Committee filed an amicus brief in support of this litigation and the national injunction on June 2 with four additional refugee resettlement agencies: the US Conference of Catholic Bishops; World Relief; the Episcopal Migration Ministries; and the Ethiopian Community Development Council.  As evidenced by the bipartisan 43 Governors and more 300 local officials who provided consent, American communities welcome refugees. This amicus reinforces our commitment to the US refugee resettlement system, the communities where we work, and the refugees who seek to rebuild their lives here in safety and freedom.