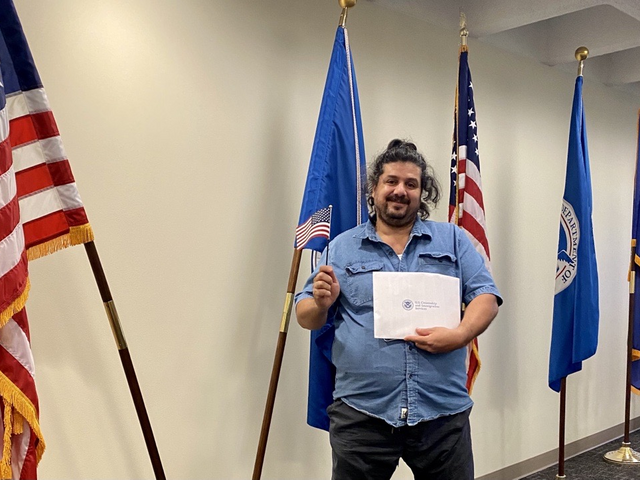 Noor, chef of Noor Al Sham, just became a citizen in the United States along with his wife and children.
Photo: Courtesy of Noor

Noor is a 45-year-old chef and the father of five. He and his family fled war-torn Syria to seek refuge in Egypt before they resettled as refugees to the United States with support from the International Rescue Committee (IRC) in Salt Lake City. He says one of the benefits of living here is that children with disabilities can still attend school, including three of his children who live with disabilities. Finally, five years and seven months later, after waiting and studying, Noor and his family are becoming citizens.

Noor, who own Noor Al Sham, a catering business started with support from Spice Kitchen Incubator, looks forward to opening a restaurant to improve the lives of his family and to share Middle Eastern cuisine with his community here in Utah. This “fed” into his decision to become a citizen. “The first thing is the democracy for everyone,” Noor thinks when he reflects on why he wanted to become a citizen. “You can speak for freedom and are free to make anything...make a business, make free speech.” 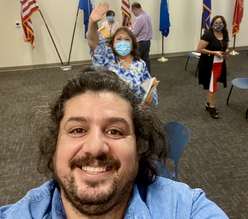 For Noor and his family, becoming citizens was exciting and solidified the United States as their home.
Photo: Courtesy of Noor

So, what does it look like to become a citizen? The process involves years of waiting, and requires intensive studying and preparing to pay high costs ever at risk of increasing. A lot is at stake. For refugees, they become legal residents the day they arrive in the United States, but they must wait five years before applying for citizenship. According to the IRC in Salt Lake City’s senior legal representative, Anna Springer, as soon as the five-year mark nears, many refugees have the mentality of “let’s do this.”

In order to become citizens, refugees are separated from family and friends in other countries, limited in their opportunities to travel outside of the U.S., which means they often go years without seeing close family members in person. After earning their citizenship, though, they have the ability to travel with a U.S. passport. One of the main motivators, too, is the ability to apply for close family members to join them, including their parents, siblings or their children who are over 21 and could not join them when they first came to the United States. Though this is a motivation for some refugees on the path to citizenship, it could still be years and years before they are reunited with family members through the reunification process.

One of the final obstacles to U.S. citizenship is the naturalization test that relies heavily on English language fluency and comprehension. Questions from the application are read during the interview to test applicants’ understanding. Originally, the test was designed specifically for those with the highest level of beginner’s English. When the test was updated with legal information, these questions were not given the same treatment and can be confusing even for experienced speakers.

Passing the test is a major accomplishment. 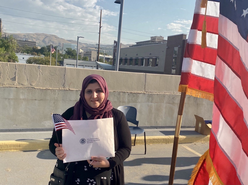 Rzan quickly studied for the test, while working and taking care of her family. After receiving her U.S. citizenship, she immediately registered to vote.
Photo: Courtesy of Noor

“This is a very hard test...and before it is done, it is very heavy,” Noor says. His wife, Rzan, became a citizen a couple months ago. “My wife is a very, very wonderful woman, because she didn’t go to any school for the last five years and studied just one month for the test. My wife cares for five kids, works in the day and studies in the night.” She registered to vote immediately after to cast her ballot for the coming election.

“I’m very excited to vote,” Noor shares. “Because I [went] to [the] United States to be better. Refugees don’t come here to take money, all refugees come here to be citizen, to work hard, to make a house, to make a business and to help other refugees coming in the future.”

Before the pandemic, Anna’s favorite moment came during the ceremony when everyone who passed the test would gather, passing a microphone to share their stories. “Every person would start to cry,” Anna reflects, tearful herself. “It’s something they’ve longed for,” she shares. “There’s still more growth, but it’s such a meaningful step.” They no longer have to live in the uncertainty of their legal status in the U.S., they no longer have to exist in a legal limbo.

Our team works alongside immigrants and refugees like Noor in their steps towards citizenship, supporting them as they study for the citizenship test, submit the necessary applications, and learn about voting in the U.S. You can ensure new Americans in our community continue to receive access to these vital civic engagement programsy by making a gift today at Rescue.org/GiveSLC.