Thank you for celebrating World Refugee Day with us!

The sound of a choir singing hymns filled the air on the warm afternoon of Saturday, June 19 at Tom Brown Park, Tallahassee, Florida as dozens of refugees celebrated World Refugee Day. It has been over a year since a gathering of this size has taken place among the refugee community in Tallahassee, and it's a prominent sign that Big Bend communities are opening up after months of social distancing and closures as a result of the pandemic. Many of the families participating in IRC’s Family Day at the Park had not seen each other in months, and the event was not only a celebration of the resiliency of refugees but an opportunity to say hello to old friends. 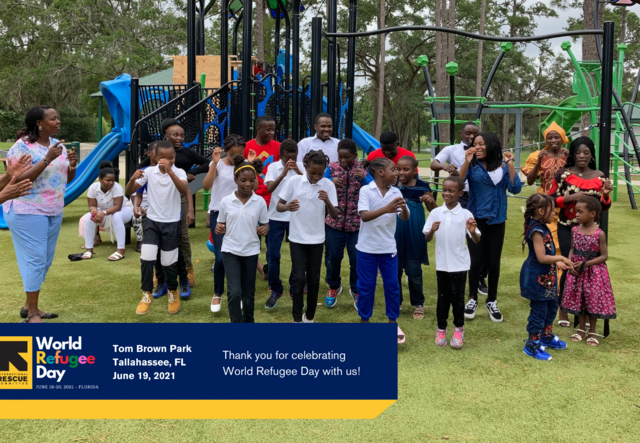 Community partners were among those participating, including organizations and individuals that have supported the refugee community throughout the IRC in Tallahassee’s six years of resettlement work. These partners included: Humanists of Tallahassee, The Church of Jesus Christ of Latter-Day Saints, St. John's Episcopal Church and Alpha Kappa Alpha Sorority. The event also marked the first time since the beginning of the pandemic that all of IRC in Tallahassee’s staff and several of its volunteers gathered to celebrate alongside refugee families.

Although the event at Tom Brown Park was yet another example of refugee’s perseverance, resilience and optimism towards the future, it also highlighted the increasing diversity represented within Tallahassee's small refugee community. Represented among the 70 individuals participating in the event, there were three languages and over five nationalities. Traditionally, the IRC in Tallahassee has resettled refugee's primary from the Democratic Republic of the Congo and Syria. In recent month, the Tallahassee community has welcomed refugees from Latin America, including families from Colombia and El Salvador.

The increase of diversity among Tallahassee’s small refugee community is bound to expand as the Biden Administration’s new policies towards refugee resettlement open the door for thousands of refugees to be welcomed into the U.S. during FY22. In response to the expected increase of refugee arrivals to the Tallahassee area, the IRC is boosting its capacity to welcome and support newly arrived families.

The community’s role in supporting our new neighbors will be critical to maintaining Tallahassee’s welcoming spirit, and will ensure that refugees are able to heal and rebuild their lives. Tallahassee's welcoming spirit was in full display during IRC’s live panel discussion which featured community leaders and representatives of elected officials. Watch the panel discussion here:

“I want all refugee families to know that Tallahassee is your city too, we welcome you, we want you to participate and know that this is your home.” - Ms. Courtney Thomas - Director of External Affairs, Office of Tallahassee's Mayor John E. Dailey

To learn more about the work of the IRC in Florida and for information on how you can get involved with the IRC as a donor or volunteer, please contact Development Coordinator, Melody Fakhourie at Melody.Fakhourie@Rescue.org.Stay connected to the IRC in Florida! Like us on Facebook for announcements and upcoming events!