Five reasons why Afghanistan remains within the top 3 countries most at risk of worsening humanitarian crisis in the International Rescue Committee’s Emergency Watchlist.

Afghanistan remains within the top of Watchlist for 2023 – dropping from number one not because of an improvement in conditions, but because of the severity of the situation in East Africa. Here’s what you need to know about the humanitarian emergency.

Over a year since the Islamic Emirate of Afghanistan (IEA, commonly known as the Taliban) took power, prompting international donors to suspend most non-humanitarian funding and freeze billions of dollars in assets, Afghans are feeling the devastating impacts of the economic collapse. Rapid increases in aid prevented famine last winter and enabled nearly 10 million Afghans to access health and nutrition services, averting the worst outcomes.

But these steps do not address the root causes of the crisis. Despite efforts to engage the de facto authorities, the international community has not agreed on a plan to address Afghanistan’s economic collapse. Almost the entire population is now living in poverty as families head toward another long winter.

In addition, globally, Afghanistan ranks 170th out of 170 countries for women’s inclusion, justice and security. Contributing to the crisis are chilling announcements from the Taliban banning women from attending university and working for NGOs like the International Rescue Committee. The latter decision forced the IRC and other NGOs to suspend services, because we cannot deliver services without female staff. 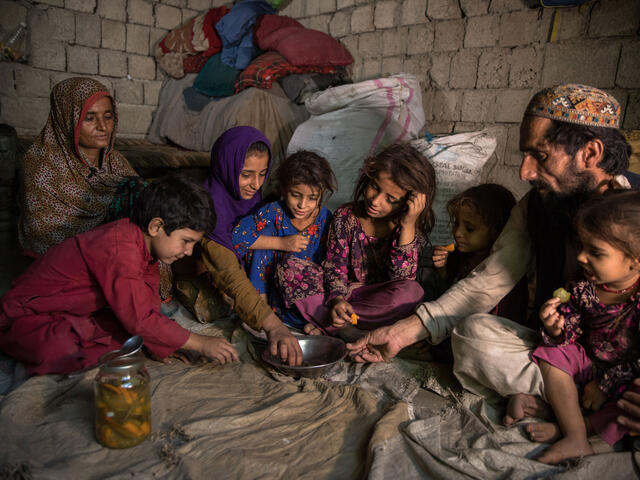 Sajida* and her husband Rahmanullah* with their children on the floor of their home. Sajida makes pickles which her husband then sells at the bazaar. They use the income to provide for their five daughters and one son. The family lives in extreme poverty, with the preparation and sale of pickles as their only source of income.
Photo: Oriane Zerah for the IRC

“Increasing hunger, natural disasters, unemployment, a banking and liquidity crisis, rights-violating restrictions on women and girls, and the lack of functioning economy mean Afghans are facing a multitude of simultaneous crises,” – Zuhra Wardak, IRC deputy director for ethics, compliance and gender in Afghanistan.

Ninety-seven percent of Afghanistan’s population is at risk of poverty, with over half of Afghans reliant on humanitarian aid. Already, 91% of the average Afghan household’s money is spent on food, forcing many families to resort to rationing and other coping strategies.

With 75% of public spending in Afghanistan subsidized by international aid, major gaps in state finances remain. And with the IEA unwilling to make concessions on the conditions set for the release of its foreign reserves from the Afghan Fund, Afghanistan’s central bank remains unable to play its role in distributing money.

Afghanistan enters the winter in 2022 with 18.9 million people experiencing food insecurity. This is double the number from the summer of 2021, and means people are unable to access or afford the food needed to live a healthy life. People are forced to make impossible choices to put food on the table, and children are at particularly increased risk of starvation, malnutrition and hunger, and preventable diseases. 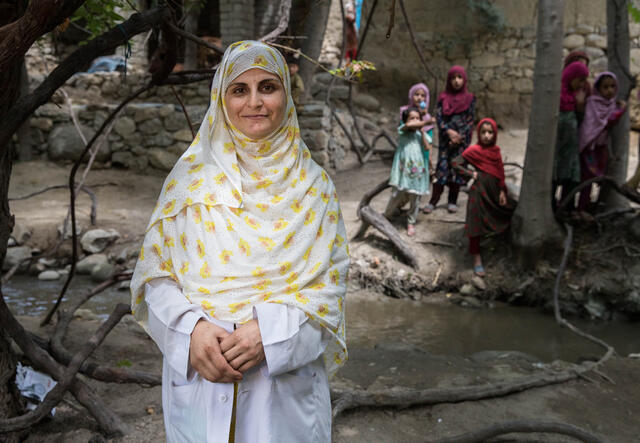 Marwa works as a nutrition counselor for an all-women IRC mobile health and nutrition team. They are deployed to reach remote villages that often lack basic infrastructure and healthcare, particularly for women and children.
Photo: Oriane Zerah for the IRC

Afghanistan is facing its third year of drought. On top of this, it has seen violent flooding across the country driven by above average rainfall, melting himalayan glaciers, and poor management of water infrastructure. The La Niña effect is predicted to lead to a third failed wet season next year, which would hamper food production and continue to drive people to displacement.

Afghan women and girls will continue to suffer disproportionately

Globally, Afghanistan ranks last for women’s inclusion, justice and security according to Georgetown’s Women, Peace, and Security Index. The Taliban have banned women from studying in universities, serving as political appointees and working for NGOs like the IRC. Alongside dress and travel restrictions, these bans intensely marginalize women in Afghanistan and contribute to an erasure of women from public life.

The bans will also have catastrophic impacts on the country’s ability to rebuild. Of the 8,000 people the IRC employs in Afghanistan, over 3,000 are women. We cannot reach people in need without female staff. As a result, for the first time since 1988, we have suspended our work in Afghanistan. However, we are proactively seeking permissions for female aid workers from the provincial authorities to restart as many of our programs as possible.

Health, education, and livelihood services are unlikely to keep up with high levels of need

In 2022, the government cut spending on social services in the country by 81%. Combined with the halt in most international funding, this has severely weakened the delivery of essential public services. While a World Bank-managed program called the Afghanistan Reconstruction Trust Fund (ARTF) has allowed some services to resume, levels of development support to Afghanistan are set to continue to decline. This means services are unlikely to keep pace with rising needs. 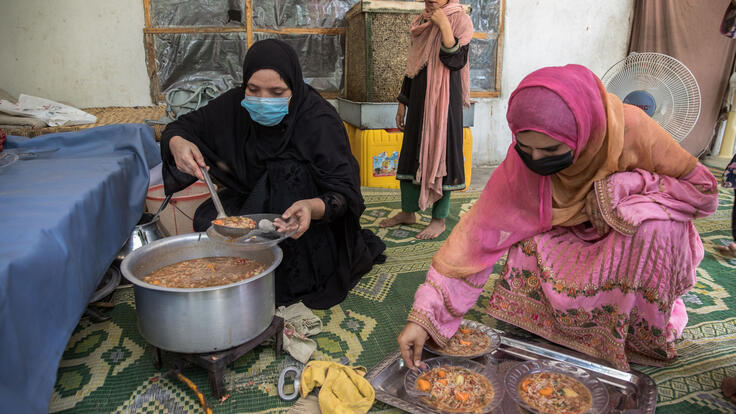 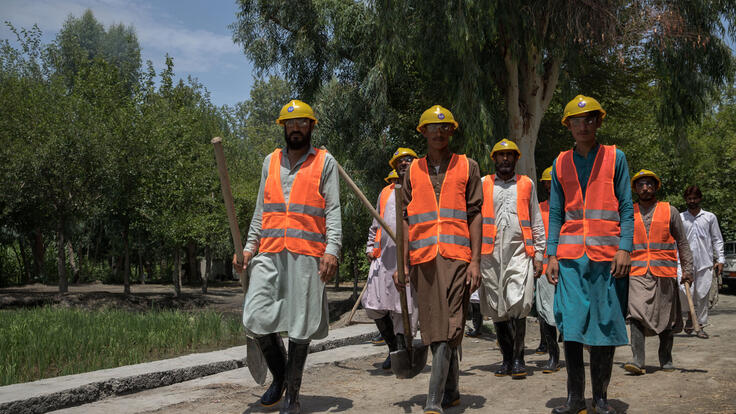 Zhwan (left), a 38-year-old farmer, has been part of the construction of a new irrigation canal, which has helped increase his crop yields. Photo: Oriane Zerah/IRC 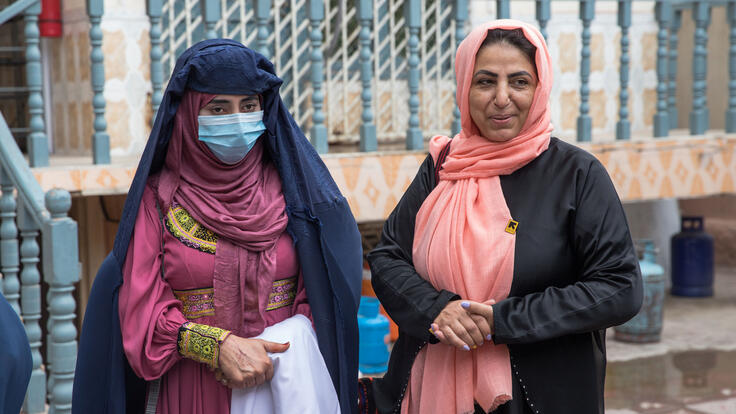 Editor’s note: The IRC’s ability to deliver services relies on female staff at all levels of our organization. If we are not allowed to employ women, we are not able to deliver to those in need. For this reason, the IRC has currently paused our services in Afghanistan. However, we are proactively seeking approvals for female aid workers from the authorities to get all IRC staff back to work in a phased, sector-by-sector manner—and have since been able to restart our health and nutrition activities in eleven provinces.

The IRC has worked in Afghanistan since 1988, providing healthcare, education and emergency response services. In 2022, we scaled up our staff from 1,700 to 7000 today. 95% of our staff are Afghan and 41% are women. We operate in 12 provinces, supporting 68 health facilities and running 30 mobile health teams across the country. We also provide community-based education programs, family support centers, as well as job skills training and help finding employment. In the next year, we expect to reach 800,000 direct clients and 4 million indirect clients.

Donate now to support the IRC's life-changing work in Afghanistan and worldwide. We are on the frontlines providing critical aid to crisis-affected people in more than 40 countries, including places on the 2023 Emergency Watchlist.

Your contribution will help the IRC respond to humanitarian needs in Afghanistan and worldwide.