Here are five reasons the International Rescue Committee’s Emergency Watchlist ranks Afghanistan as the country most at risk of worsening humanitarian crisis in 2022.

January 7, 2022
Photo: Kellie Ryan/IRC
At a glance
At a glance
Support the IRC's response

Afghanistan rises to the top of Watchlist as the population increasingly cannot meet basic needs and the economy and public services collapse, despite the end of major conflict. Here's what you need to know about the growing humanitarian crisis in Afghanistan.

In August 2021, the Islamic Emirate of Afghanistan (IEA), commonly known as the Taliban, took control of Afghanistan. This shift in power followed a major escalation in conflict between the IEA and government of Afghanistan over the course of 2021 and a U.S.-IEA deal that saw American forces depart the country rapidly.

The Taliban’s control of the country led international donors to immediately suspend most nonhumanitarian funding and freeze billions of dollars’ worth of assets. Without this funding, most health clinics have closed and the economy has spiraled downward (risking near-universal poverty) as the country confronts an ongoing drought and hunger crisis and possible fourth wave of COVID-19. Four decades of crisis have weakened the country’s ability to cope with new shocks. Afghans may increasingly resort to leaving the country if they cannot meet their needs inside Afghanistan. 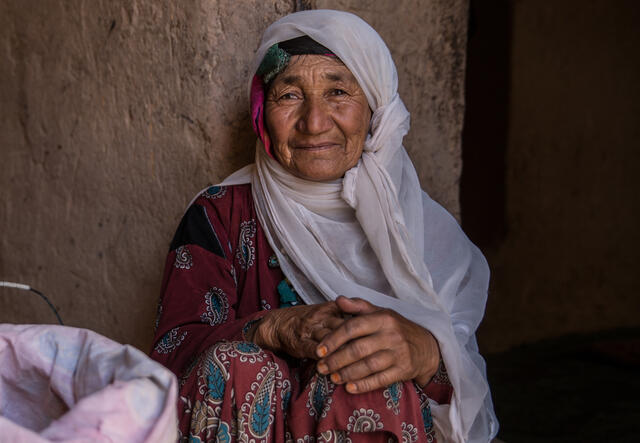 Cash assistance from the IRC has enabled Afghans impacted by the economic crisis to buy food and other basic items.
Photo: Stefanie Glinski/IRC

“The IRC is witnessing an unprecedented economic crisis in Afghanistan that is harming the most vulnerable Afghans more than anyone," says Awesta*, an emergency support officer for the IRC’s cash distribution program.

Most Afghans can’t afford to feed themselves or their families, and, with millions marching towards famine, I am desperately concerned for the people of my country.

"The international community has turned its back on us. The health care system is on the brink of collapse; most Afghans can’t afford to feed themselves or their families, and, with millions marching towards famine, I am desperately concerned for the people of my country.”

The ongoing collapse of the economy could further deepen the humanitarian crisis.

Donor countries’ halt in funding and freezing of Central Bank assets have created a major financial crisis for Afghanistan. A cash shortage means Afghans are running out of money while prices of basic items—from food to medicine—are skyrocketing. Afghanistan could see near universal poverty by mid-2022, with 97% of Afghans impoverished, according to the United Nations. Unaddressed, this economic crisis will drive up humanitarian needs, from food insecurity and malnutrition to health crises. Humanitarian organizations operating in Afghanistan are not spared from the economic crisis; cash is needed to pay staff and suppliers, purchase items and provide cash programs for the most vulnerable.

Afghanistan is nearing the breakdown of virtually the entire health system and other basic services, jeopardizing the wellbeing of millions of Afghans.

For the past two decades, Afghanistan has been highly dependent on foreign funding to pay civil servants like health workers and teachers and operate essential public services. The previous government had relied on foreign funds for around 75% of its public spending. In particular, around 30 million Afghans depended on health services through a World Bank-managed program. Now, over 90% of the country’s health clinics are expected to shut down, depriving millions of basic care, threatening the COVID-19 response and creating a major risk of disease outbreaks, malnutrition and preventable deaths. 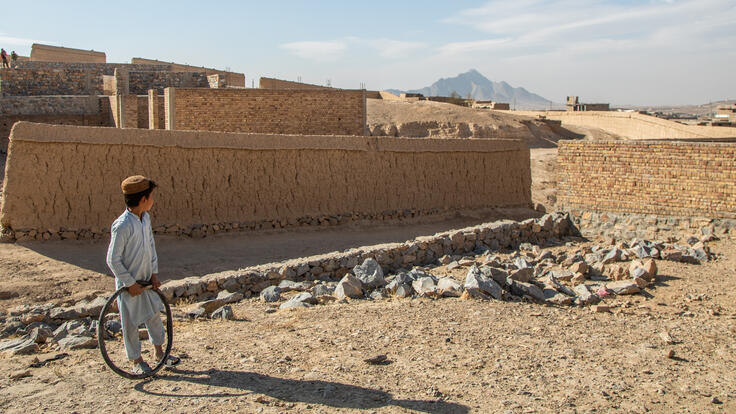 Financial sanctions on Afghanistan could lead to near-universal poverty, even as the country confronts an ongoing drought and hunger crisis and possible fourth wave of COVID-19.
Photo: Kellie Ryan/IRC

An unprecedented hunger crisis is emerging in the wake of the economic collapse and ongoing drought.

By late 2021, nearly half of Afghans were experiencing crisis or worse levels of food insecurity—the highest level ever recorded in Afghanistan and a 37% rise compared to six months earlier. Throughout early 2022, 55% of Afghans will face acute food insecurity, including nearly 9 million people at emergency levels—one step before famine conditions. Food insecurity is likely to deepen in 2022 as the country is facing shortages of food, rapidly rising food prices and an ongoing drought. Hunger may drive further displacement, as evidenced by IRC assessments in five provinces in mid-2021 that identified lack of food and livelihoods as the top reasons for people leaving their homes.

A shadow crisis for Afghan women and girls is looming.

Women and girls in Afghanistan are now at higher risk of gender-based violence, child marriage, and exploitation and abuse as resources become scarce and needs go unmet. The collapse of the health system could unravel gains made in areas like maternal health. These risks will be magnified by any gender-specific restrictions—on women’s ability to work and ensure self-sufficiency or girls’ ability to receive an education. Any national or localized constraints on female aid workers would jeopardize the humanitarian response, as many women would be unwilling—or not allowed—to access services from male staff.

Despite an end to nationwide conflict in 2021, Islamic State Khorasan (IS-K) could drive greater violence and civilian harm.

IS-K has sought to expand its operations in the aftermath of the Taliban taking power. The group presents a significant security threat and could seek to take advantage of the shift in power and numerous crises in the country to drive greater insecurity. IS-K intensified its attacks soon after the Taliban took control. It remains unclear how well the new government will be able to address these kinds of security threats and mitigate the harm to Afghan civilians. 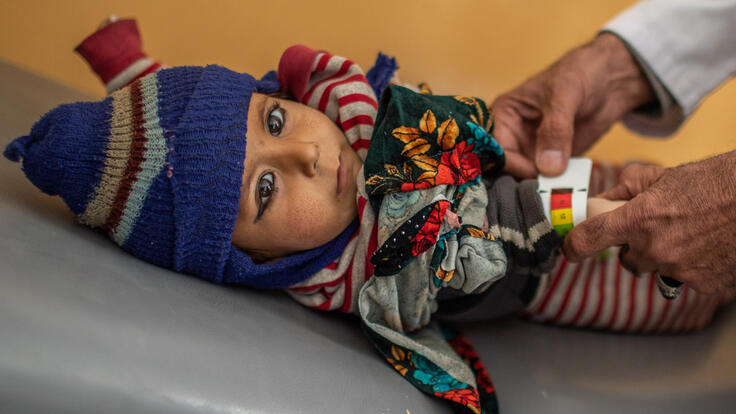 Baby Habib* is screened for malnutrition at a health clinic supported by the IRC in Afghanistan. Over 90% of the country’s clinics are expected to shut down as a result of the economic impact of sanctions. (*Names have been changed.) Photo: Kellie Ryan/IRC 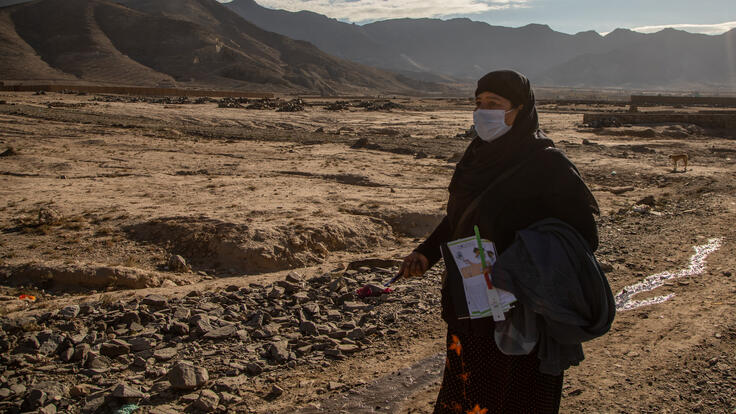 Nazo* is an IRC-trained community health volunteer who goes door to door visiting mothers and teaching them how to help their children avoid becoming malnourished and getting sick with other diseases. Photo: Kellie Ryan/IRC 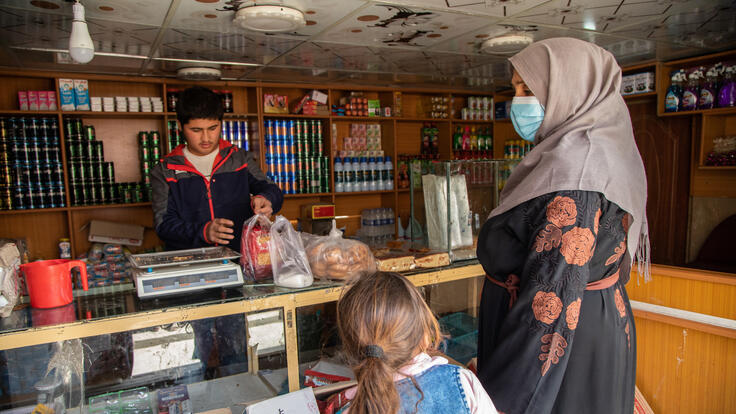 Noor* takes her daughter to the local market to purchase food for her family using emergency cash from the IRC. Food prices have skyrocketed as the economy collapses, and families cannot afford what they need to survive. Photo: Kellie Ryan/IRC 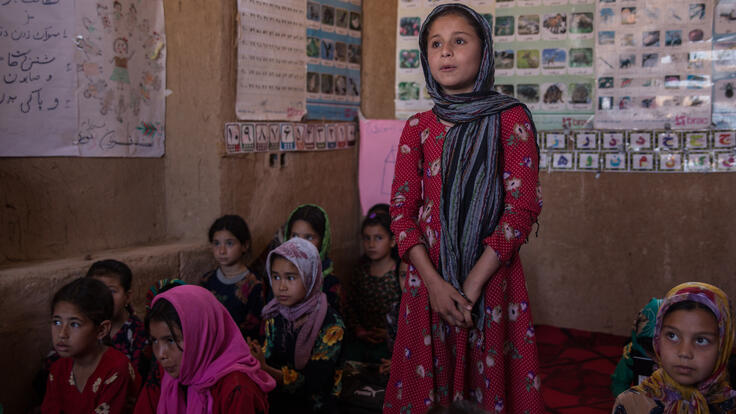 The IRC provides safe learning spaces and community-based education. Women and girls in Afghanistan are now at higher risk of gender-based violence, child marriage, and exploitation and abuse as resources become scarce and needs go unmet. Photo: Stefanie Glinski/IRC Learn more about our work in Afghanistan.

The IRC is responding to COVID-19 and other health needs by supporting over 100 health facilities, installing hand-washing stations at communal gathering points, and providing information and training sessions about COVID-19. In recent years, the IRC has become a leader in women’s protection and empowerment in Afghanistan.

Get our latest Afghanistan crisis updates.

Thank you to the team at @USofAlCBS for bringing together this incredible group to raise awareness for the emergency happening in #Afghanistan.

The time is now to act – and together we can indeed call for more support from global leaders.

Donate now to support the IRC's life-changing work in Afghanistan and worldwide. We are on the frontlines providing critical aid to crisis-affected people in more than 40 countries, including places on the 2022 Emergency Watchlist.