How to prevent starvation in Afghanistan this winter

Within the next six months, nearly all 38 million Afghans are projected to be living in poverty, while 9 million are at risk of famine conditions.

Since the change in government in Afghanistan, financial sanctions on the Taliban have had a dire impact on ordinary Afghans who are struggling to access cash, health care, medicine and food.

International Rescue Committee (IRC) teams are seeing children arrive at our health clinics on the brink of starvation—with a thirty-fold increase in acutely malnourished children in one month alone. We have heard accounts of families who have already endured decades of conflict selling their belongings for cash to buy food, and of daughters forced to marry to bring income into their family.

The United Nations Security Council’s recent move to provide a humanitarian exception to the sanctions is an encouraging development amid a deepening crisis. Humanitarian organizations like the IRC will now be able to scale up and deliver lifesaving services to Afghans in need without fearing legal repercussions. “This couldn’t come soon enough as 9 million people in Afghanistan are marching toward famine,” says IRC president and CEO David Miliband.

...9 million people in Afghanistan are marching toward famine and Afghan families are bracing for an extremely tough winter.

However, Miliband says, the Security Council’s action alone is not enough to stave off economic collapse and alleviate widespread suffering. “The international community needs to move quickly and take decisive steps to increase development aid and cash flows into the country to help the Afghan people.” 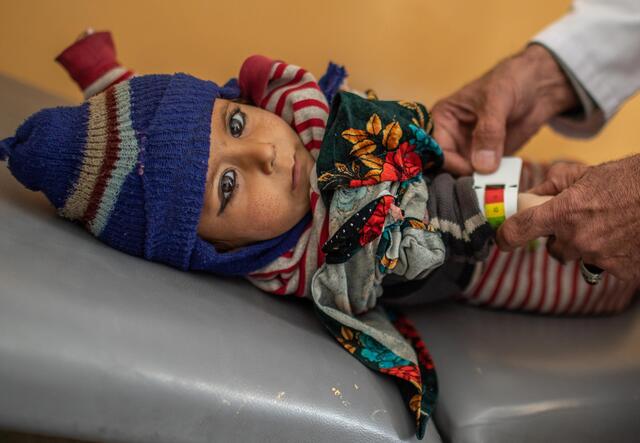 Baby Habib* is screened for malnutrition at a health clinic supported by the IRC in Afghanistan. More than 24 million Afghans are in urgent need of humanitarian assistance.
Photo: Kellie Ryan/IRC

Without foreign aid—which previously propped up 75% of all Afghan government spending—the government is unable to pay public servants and deliver health care and other vital services to millions of Afghans. At the same time the freezing of Afghanistan’s financial assets and suspension of its International Monetary Fund (IMF) support has sent the Afghan economy into a tailspin, severely limiting the government’s ability to pay for basic goods such as medicines, fuel and food.

Most Afghans can’t afford to feed themselves or their families... I am desperately concerned for the people of my country.

Food prices have risen by an estimated 10-20% compared with the previous five years. In December 2021, the cost of wheat, fuel and flour were almost 50% higher than in the last week of June. On top of this, below-average rainfall during the 2021 rainy season has had a knock-on effect during a winter that has so far seen very little snowfall. The lack of precipitation has stunted the growth of farmers' first crops of the new year, and households will experience increased stress as food prices rise even higher and jobs become fewer and further between.

The crisis has led to a surge in severe acute malnutrition (SAM) among children, a condition that requires urgent treatment to avoid long-term physical and cognitive consequences or possible death. In recent months, IRC-supported community health workers have seen a stark increase in children presenting with SAM, the severest form of malnutrition; in Khost and Herat provinces there has been a thirty-fold and two-fold increase respectively between November 2021 and December 2021 alone—a testament to growing humanitarian need. Without timely and adequate care, these children are 11 times more likely to die than other children at a healthy weight.

"The IRC is witnessing an unprecedented economic crisis in Afghanistan that is harming the most vulnerable Afghans more than anyone," says Awesta*, an IRC emergency support officer who provides cash to help displaced families meet their essential needs. 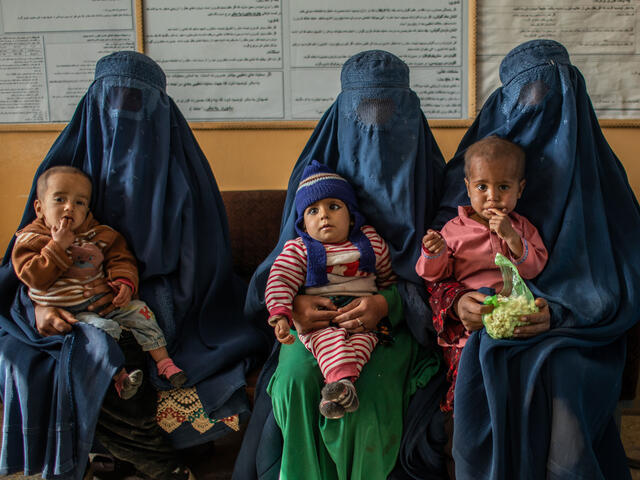 Mothers wait for their children to be screened for malnutrition at an IRC-supported health clinic. Children are arriving at the clinics severely malnourished and on the brink of starvation.
Photo: Kellie Ryan/IRC

“The international community has turned its back on us. The health care system is on the brink of collapse; most Afghans can’t afford to feed themselves or their families... I am desperately concerned for the people of my country."

How the IRC is helping in Afghanistan

Afghanistan tops the IRC’s list of crises expected to deteriorate the most in 2022.The IRC began work in Afghanistan in 1988, and now works with thousands of villages across nine provinces, with Afghans making up more than 99% of IRC staff in the country.

As Afghanistan struggles to recover from ongoing conflict and natural disasters, the IRC:

The IRC is also helping Afghans who fled their homes to resettle in the United States and other countries. 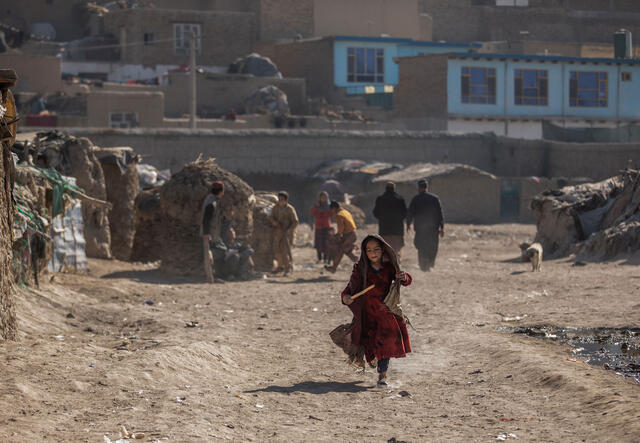 A girl runs through Ghaibi Bala camp in Kabul, Afghanistan. Around 5.5 million people have been displaced inside the country, with 681,300 of them displaced this year alone.
Photo: Kellie Ryan/IRC

How you can help Afghans

Millions of children and families in Afghanistan are facing extreme hunger, and conditions are expected to worsen as winter sets in. Donate now to help make sure families have what they need to survive.

*Pseudonym, name has been changed