Days of intense bombings have destroyed or damaged the last remaining hospitals in East Aleppo, including three supported by the IRC. Below is a first-person account from one of the many Syrians who live under constant gunfire and barrel bombs.

Millions of Syrians remain in their war-torn country under nightmarish conditions. More than 250,000 people are trapped in eastern Aleppo. They have little food, water or fuel, and as of yesterday, no functioning hospitals.

The International Rescue Committee spoke to a Syrian man, who wishes to remain anonymous, living under siege in eastern Aleppo. Only 24, with a still youthful smile and hair pulled back in a ponytail, he concentrates wholly on basic survival: finding enough food to eat, some water and, with luck, avoiding bunker-busting bombs. Here’s what he told us via Skype over the past week: 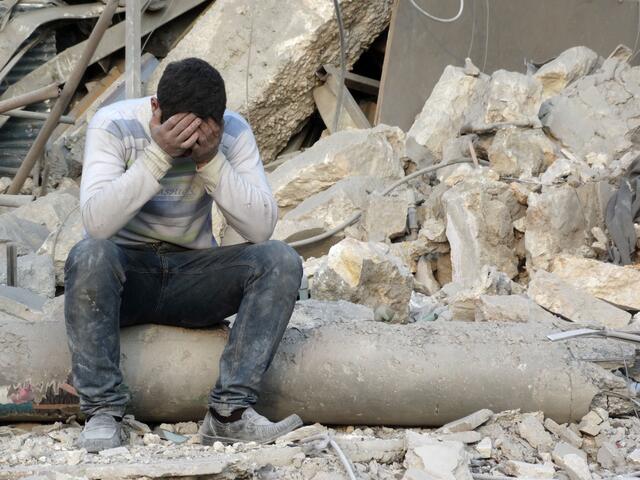 A Syrian man reacts to the destruction in Aleppo. The war in Syria is now in its sixth year and has cost some 400,000 lives.
Photo: KHALED KHATIB/AFP/Getty Images

All day. All night. It’s pretty much nonstop. It’s terrifying.

When you walk down the streets in Aleppo, you can see the faces of scared people and terrible destruction. All kinds of weapons are used against them. All it takes is a moment—you notice an airplane above you and then a missile. It is worst at night; it’s more frightening.

Hearing the jets flying over you, it’s the most horrible feeling in the world. You feel that you die several times. The worse fear is getting hit at nighttime. You know there would be nothing you could do, no way of running to safety or finding shelter.

The intensity of the airstrikes over the past six days mean that it’s too dangerous to leave your home. The bombardment in eastern Aleppo has increased by 80 percent—a massive increase in destruction and casualties.

There are more than 250,000 people living in eastern Aleppo. The majority are women and children. You find yourself exchanging fearful looks with other people around you because everybody is thinking about death.

People who live in Aleppo right now expect to die at any moment. People have adapted to this reality.

Those who have basements use them as shelters. However, people are still afraid because with the advent of bunker-buster bombs, even those underground are afraid. There are shelters, but these bombs cause buildings to collapse on top of people and they end up under the rubble. Every night when we go to sleep, we don’t know if we will wake up under rubble. We are just waiting for our time to die.

But there is nobody who would want to live his or her entire life underground. People are resigned to the reality of the situation. People who live in Aleppo right now expect to die at any moment. People have adapted to this reality.

Hospitals have become targets. Now there are no hospitals people are very scared of getting injured in the slightest. We know there is no way to get treated. There isn’t even medicine for the simplest of illnesses.

Mental health is the worst. They’ve been through one siege after another. People are weary. They have witnessed dismembered body parts and blood. 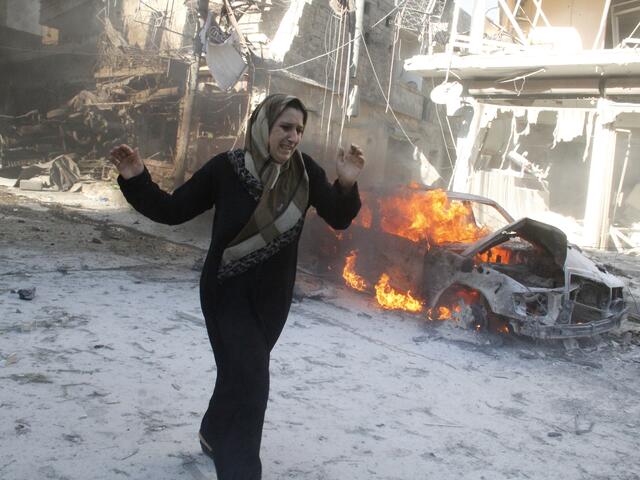 When the bombardment does stop for a moment, we mostly try to purchase groceries. Poor people switch between rice and wheat. You can sometimes find pasta and beans. But eggs, cheese and chicken are unavailable.

No fruits or vegetables either, unless you’re able to afford the very expensive prices. Because there are a few farms within the city limits, you can find eggplants and zucchinis…also beets because it is their season. These are available in small quantities.

When bunker-buster bombs hit the ground, they cause a hole about nine meters deep. The water supply network gets damaged and there is no equipment to repair it. Sometimes the water gushes out for two or three weeks at a time.

It is nice to have a partner…

I got engaged to my wife in June. She used to be a teacher, but not anymore. She is focusing on studying Arabic literature. Most people told me to postpone the wedding. We agreed to get married anyway. At least we will be together.