Tens of thousands of people have fled Aleppo as Syrian government forces take control of the city's eastern neighborhoods following months of besiegement and aerial bombardment. Here’s a closer look at the dire humanitarian situation.

For the latest updates, please see: What next for people fleeing Aleppo?

What is happening in Aleppo?

Although Aleppo was largely spared from violence in the first months of the Syrian conflict, fighting broke out in July 2012. By November 2016, some 250,000 Syrians were pinned down by clashes between government forces in western Aleppo and rebels controlling eastern neighborhoods.

After bombings began to intensify in November, food and medicine were cut off, and the last local hospitals were destroyed. Civilians huddled in basements in fear of “bunker bombs.” One 24-year-old Syrian man living in eastern Aleppo described the city as a “ghost town” where airstrikes made it extremely dangerous for anyone to leave their homes.

"Eastern Aleppo has become a bloody graveyard for thousands of innocent people and for the death of respect for international law and the rules of war."

The United Nations reported this week that families are being shot in cold blood in their homes as their neighborhoods are retaken.

"The people of Aleppo are caught between medieval sieges, the horror of aerial bombardment and house-by-house retribution," said IRC president David Miliband.

"Eastern Aleppo has become a bloody graveyard for thousands of innocent people and for the death of respect for international law and the rules of war," he said.

In the past week, around 4,000 Aleppo residents among the tens of thousands who managed to escape have arrived in Al Dana, a town in Syria’s eastern Idlib province. IRC aid workers responding to the crisis report that many are staying in the town and its outskirts in unfinished buildings without heat, toilets or running water. Up to four families are sharing each building, and in one case 16 people were found living in a single room.

The vast majority of new arrivals are women, children or the elderly, who told the IRC that many younger men had either refused to leave Aleppo or were detained as they attempted to flee the city.

What is the state of Aleppo’s hospitals?

There are no hospitals operating in eastern Aleppo. Civilians have no access to trauma care and fear the slightest illness or injury. Even before the recent months of bombardment, there were thought to be only 31 doctors to care for a quarter million people.

All told, over the past five years, there have been more than 400 attacks on medical facilities in Syria. More than 750 medical workers have died.

“An attack on a hospital is an attack on the tens of thousands of civilians who rely on its medical care to keep them alive,” says Mark Schnellbaecher, the IRC's Syria crisis response director. “It is clear that until the international community is able to hold accountable those responsible for these abuses, nothing can be done to protect civilians."

How has the war affected Aleppo’s children?

The war has taken an especially heavy toll on children.

Over a third of civilians cut off from aid in eastern Aleppo are children. Many, like Omran Dagneesh, whose image reawakened the world to the plight of the most innocent, have suffered injury, witnessed unspeakable brutality, and lost loved ones.

Across Syria, some 2.7 million children are out of school as thousands of schools have been destroyed or damaged in the fighting.

“People are leaving Syria not only because of the destruction of their communities and the dangers to their lives, but also because of their increasing poverty and the lack of schooling available for their children,” says a former teacher from southern Syria who now works with the IRC. 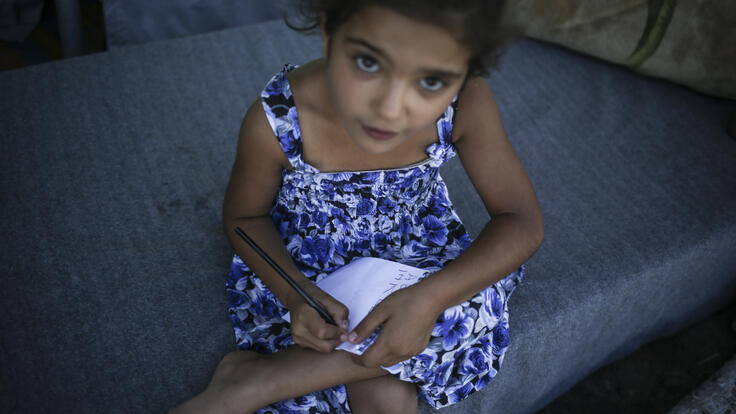 Millions of children are caught in the crossfire of more than five years of civil war in Syria. Millions more have fled to safety in neighboring countries and Europe, but face an uncertain future. The International Rescue Committee is working on all fronts of the crisis to provide children and their families with lifesaving health care and emergency aid, help coping with the trauma of war and the loss of loved ones, and educational opportunities that enable them to create a brighter future. Photo: Tara Todras-Whitehill for the IRC 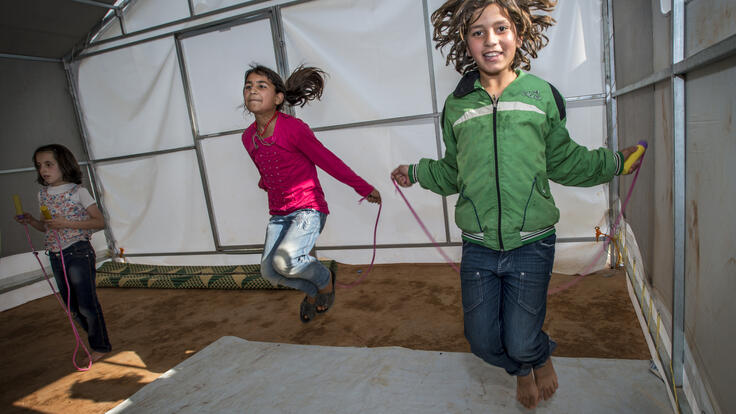 The IRC provides lifesaving support to over 700,000 children trapped by violence inside Syria, pairing health care and emergency cash for families with counseling and safe spaces where kids can play and learn to heal. Photo: Peter Biro/IRC 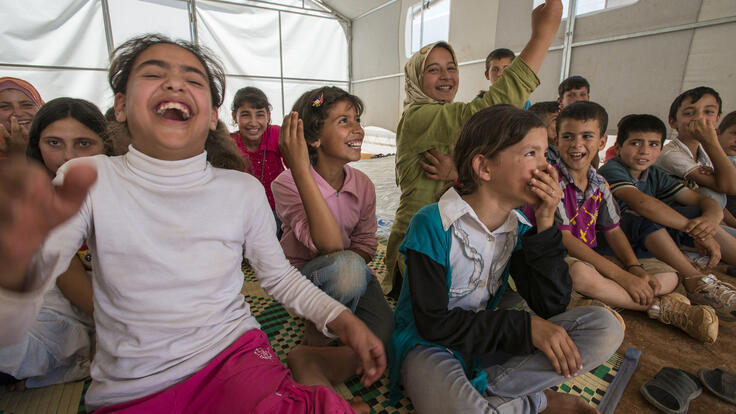 Syrian schools have been damaged and destroyed in the fighting, interrupting the education of 2.7 million children. The IRC is running classes and providing other educational support to thousands of children in camps and communities in Syria. Photo: Peter Biro/IRC 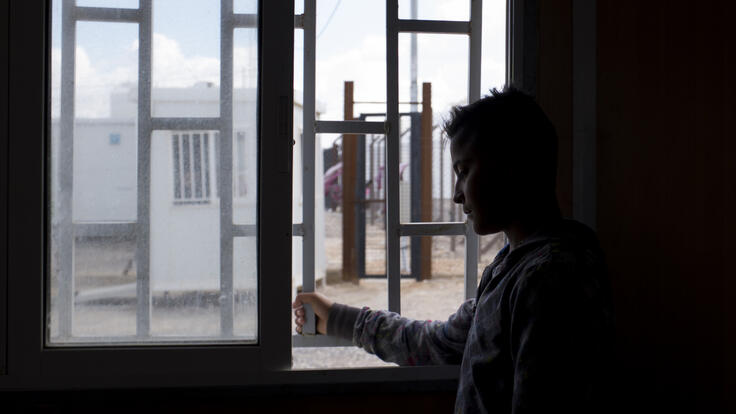 Thousands of Syrian children have crossed into neighboring Jordan on their own since 2012. A team of 64 IRC aid workers at the Azraq and Zaatari refugee camps welcome and care for unaccompanied and separated children, try to locate their relatives and, if necessary, identify potential foster parents. Photo: Kaity Kawar/IRC 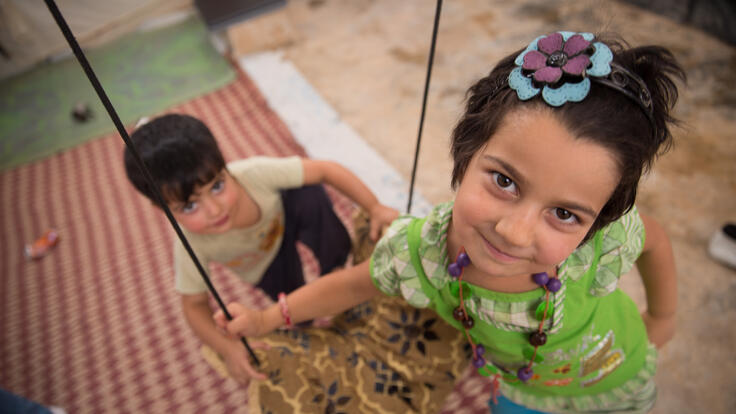 In Jordan, Syrian refugees struggle to earn a living, keep their children in school, and get adequate food and health care. The IRC is reaching children and families with critical aid. Photo: Peter Biro/IRC 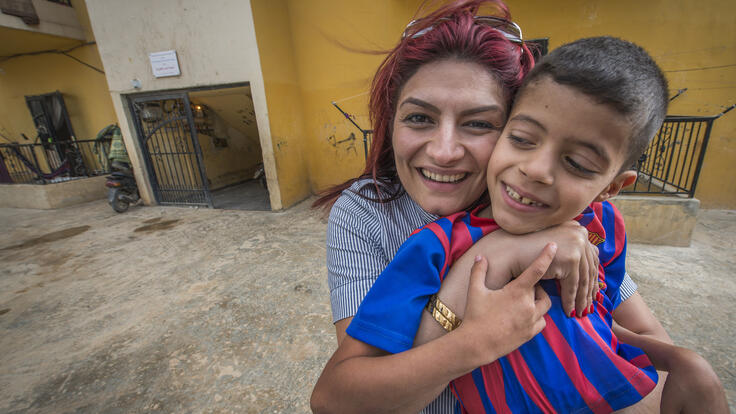 Lebanon has no formal refugee camps, and Syrians often have difficulty accessing aid. More than 200,000 Syrian children in Lebanon do not attend school—and far too many work on the streets in order to help their families make ends meet. The IRC is providing support that includes creative learning and therapeutic activities to help prepare children under five to attend school. Photo: Peter Biro/IRC 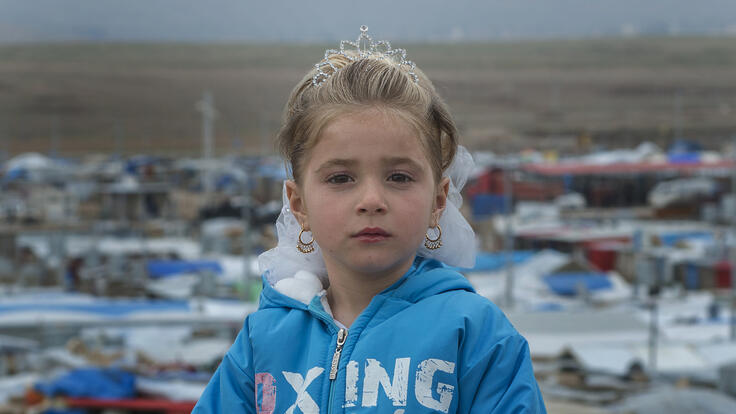 Syrian refugees who have lived for years in camps inside Iraq face dwindling services and support amid ongoing conflict and economic chaos in their host country. The IRC supports extra classes and specialized teacher training in overtaxed schools to ensure Iraqi and Syrian children have access to quality education. We also provide art therapy and other creative healing activities for children traumatized by conflict. Photo: Peter Biro/IRC 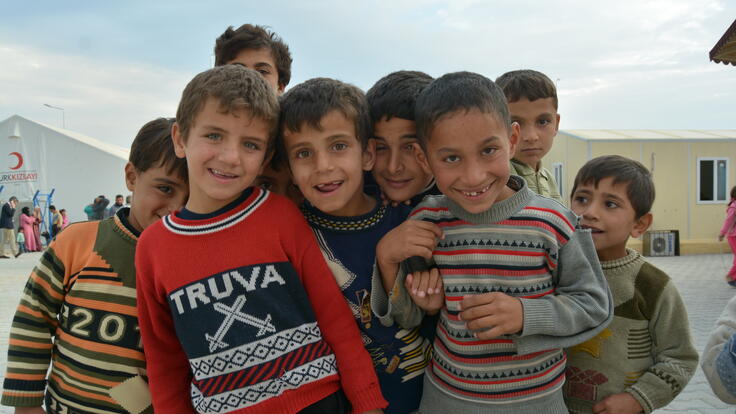 In Turkey, which hosts more uprooted Syrians than any other nation, a lack of economic opportunities has led to increased child labor in refugee communities. Most Syrian refugee children in Turkey don’t attend school. In the Turkish town of Reyhanli, the IRC is providing education and special services to help kids catch up to their age-appropriate level. Photo: Ned Colt/IRC 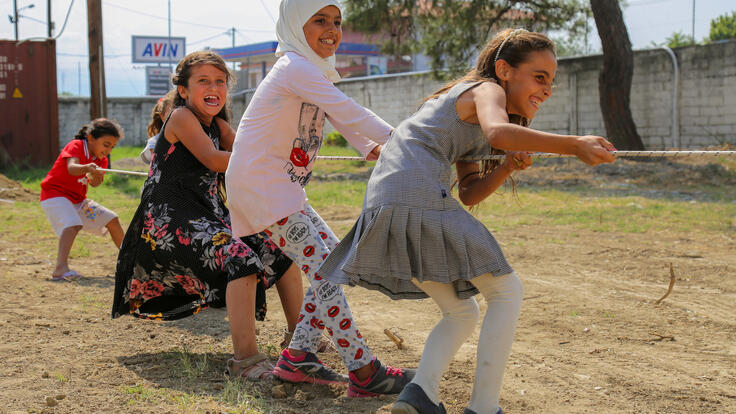 The IRC has opened three safe learning and healing spaces for refugee children in northern Greece, offering them the opportunity to recover emotionally through play and learning. The IRC is also providing psychosocial and other emergency support to children traveling alone who have been living in limbo since the EU-Turkey deal was signed in March. Photo: Kathleen Prior/IRC 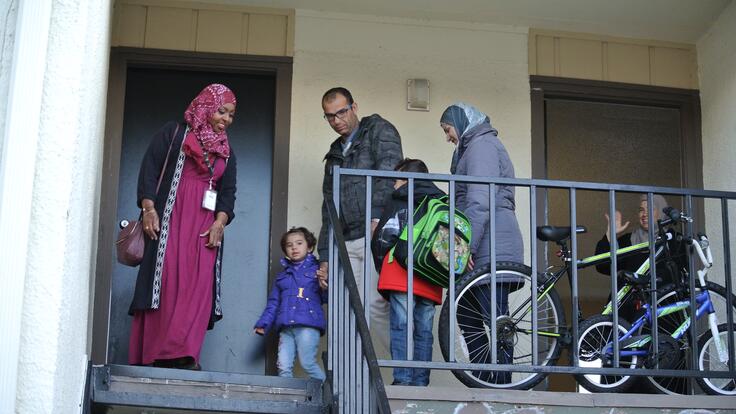 IRC caseworkers and volunteers welcome Syrian families who have been granted refuge by the United States at the airport and make sure they have everything they need to rebuild their lives in a new country. That includes helping children enroll in school. Photo: Cathe Neukum/IRC 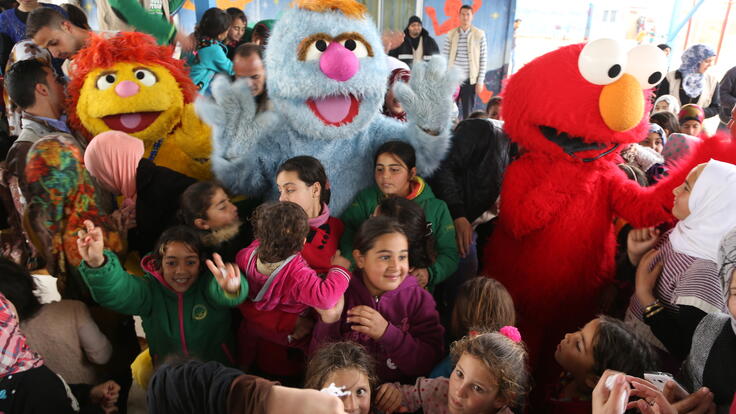 More families are uprooted today by conflict than during any time since World War II. The IRC and Sesame Workshop are working together to develop engaging educational content starring the lovable Muppets that can reach children in refugee camps like this one in Jordan — or wherever they are living — through TV, radio, mobile phones and other channels. Photo: Jordan Pioneers Multimedia Production Co. 2015.  Donate now to help Syrian children and families.

How is humanitarian aid getting into Aleppo?

Despite the Syrian government’s plan to open “humanitarian corridors” to distribute food and medical supplies to Aleppo, fighting continued unabated for months. It has been nearly impossible to get aid into the city since September.

Already limited rations ran out Nov. 13. People reportedly have been forced to eat weeds and search through garbage for scraps.

What is the IRC doing to help Syrians?

IRC aid workers are meeting people who have fled Aleppo as they reach Al Dana, identifying families in desperate need of food, fuel and emergency supplies including mattresses, blankets, soap and towels. To help ensure people can purchase the basics they need, the IRC will be giving $100 to 500 of the most vulnerable families. The IRC is hoping to secure more funding to reach all 800 of the newly arrived families in Al Dana, as well as to help any future arrivals.

The IRC currently supports 8 health facilities in Idlib governate, as well as five schools providing an education for 4,000 children. The IRC also supports four livelihood centers that help around 5,000 Syrians each month boost their income through skills training, job placements, and business start-up grants, as well as providing emergency cash distributions to families most in need.

In all, more than 3,000 IRC aid workers and local volunteers operating inside Syria and in four neighboring countries have reached over 3.3 million Syrians fleeing violence with health care, protection of vulnerable women and children, education, and economic recovery.

We are also assisting Syrians who have fled to safety in Europe or have been offered refuge in the United States.

What next for people fleeing Aleppo?

Escaping Aleppo doesn’t mean escaping the war. After witnessing the ferocity of attacks on civilians in the city, the IRC is very concerned that the sieges and barrel bombs will follow the many thousands of Aleppo residents seeking shelter in Idlib province.

Read our latest explainer for updates.

How can I help Syrians?

Make a donation to support the IRC’s lifesaving work in Syria and around the world.

Learn how to help Syrian refugees and other families caught in conflict.