Behind the headlines: Attacks on Eastern Ghouta

After some of the bloodiest fighting in more than seven years of civil war in Syria—including a suspected chemical attack in the town of Douma—the enclave of Eastern Ghouta is under the control of the Syrian government. Here’s what you need to know:

Where is Eastern Ghouta?

Eastern Ghouta is a suburb of Damascus, and was besieged for over four years.

What happened in Douma? 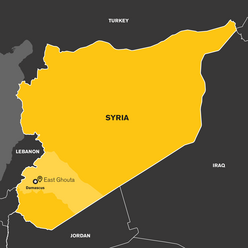 Nearly 400,000 people in Eastern Ghouta have been living under siege for the past four years, cut off from aid.

It’s been reported more than 40 people were killed and 500 injured on April 7 in a suspected chemical weapons attack in Douma, a town now under control of the government. According to reports from local hospital workers, victims were suffering from symptoms such as respiratory failure, laryngitis and foaming at the mouth. Patients were also found with cornea burns during medical examinations.

“This is not the first time such tactics have been deployed,” said IRC senior vice president of international programs Ciaran Donnelly–there was a suspected chemical attack in Eastern Ghouta in 2013 and a sarin attack in the province of Idlib last year. “These unlawful attacks pour shame not only on the parties to the conflict, but on the international community for standing by and letting it happen,” Donnelly said.

What is the humanitarian situation in Eastern Ghouta?

At least 1,700 people were killed and 5,000 were injured during eight weeks of particularly intense bombing in Eastern Ghouta this year. Conditions became so horrific that people were forced to shelter underground, living in cramped and unsanitary conditions. 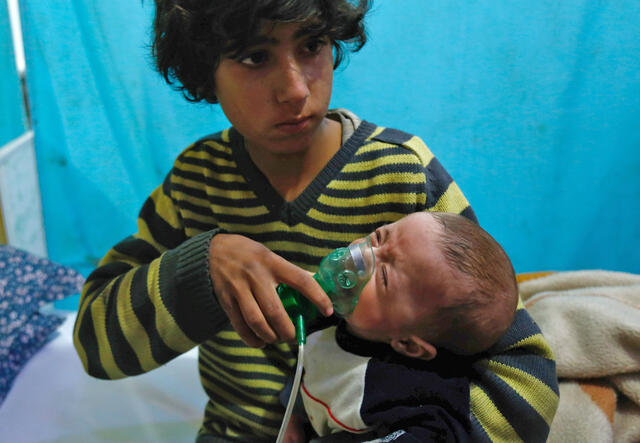 The news that another suspected chemical attack has been carried out in Syria, this time in Douma, the last rebel-held town in Syria’s Eastern Ghouta, only serves to further demonstrate that the government of Syria will stop at nothing to win this war.
Photo: HASAN MOHAMED/AFP/Getty Images

Civilians were being killed indiscriminately-—and medical facilities where the wounded sought treatment were being attacked. A health worker and six patients died when one IRC-supported hospital came under attack on Feb. 19. The hospital had treated 50 wounded people that day before damage to the building and medical equipment put it out of commission.

A nurse from another hospital supported by the IRC was killed when a bomb struck her home. And two health staff were killed after an IRC-supported hospital was hit by airstrikes on March 5.

The siege not only contributed to a medical emergency but also a food crisis that left many children dangerously malnourished. A tightening of the siege in July 2017 caused a sharp rise in prices and subsequently a food crisis, which by November had left 12 percent of children under five with acute malnutrition.

Schools in Eastern Ghouta have been closed since the beginning of January because of the increased attacks. Many children have to work to bring in money to help their families buy food. 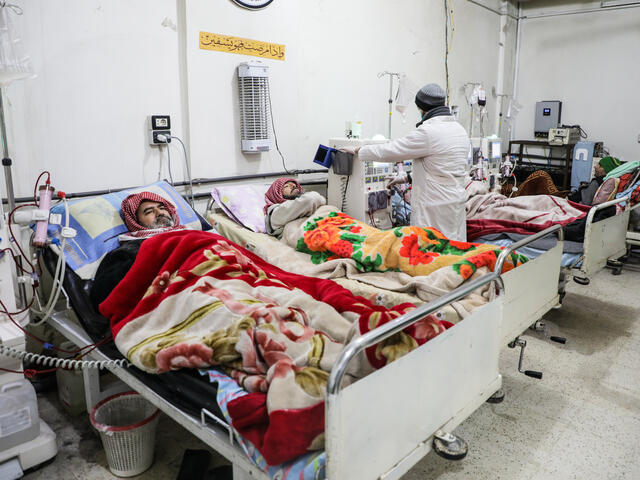 Patients with kidney failure receive treatment at a hospital in Eastern Ghouta. There are currently 700 people in need of urgent medical evacuation.
Photo: Abdullah Hammam/IRC

Where have civilians fled?

Eastern Ghouta once had a population of 400,000. More than 150,000 people have evacuated in recent weeks, including over 50,000 who made a 200-mile journey to the northern province of Idlib where there are already some 1.7 million in desperate need of humanitarian aid. Most of the newcomers from Eastern Ghouta will need to find shelter in school buildings, mosques, tents or unfinished buildings. Many are exhausted and scared for family members left behind.

How is the U.S. responding to the chemical attack in Douma?

The Trump administration and its allies launched airstrikes on April 13 in Syria after the suspected chemical attack. Syrians have endured unimaginable suffering over the past seven years; however, an isolated U.S. strike could put more Syrian lives in harm’s way.

"Now that the U.S., France and U.K. have decided on their reaction to the use of chemical weapons last weekend, the need for a diplomatic offensive is more imperative than ever," said IRC president and CEO David Miliband. "Military action is only ever successful when it is part of a political strategy, for peace-making, humanitarian aid and regional security." 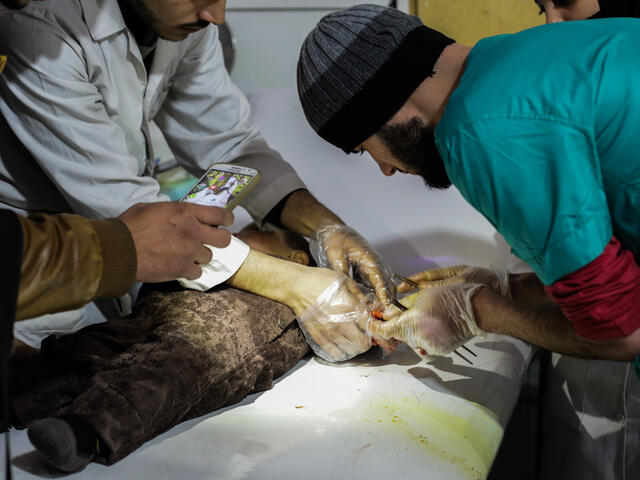 A doctor who works at a hospital in Eastern Ghouta treats a toddler's wounds, using a cell phone flashlight to better see the injury.

The IRC was supporting five partner-run health clinics and hospitals, some of which lost staff in the shelling as they worked to save the lives of the sick and injured. We covered salaries and basic operating costs, medicines and medical supplies at the five facilities.

Through our partners, we also provided nutritional supplements to more than 3,300 malnourished children this year.

In the weeks of bombardment before Eastern Ghouta fell under the control of the Syrian government, the IRC’s partners described a dire health situation: medical staff more stretched than they had been since the area came under siege four years ago, short on supplies and forced to reuse syringes; patients taking expired medicine; thousands of people with chronic diseases suffering without necessary care.

We urge the Trump administration to channel that outrage constructively and lead the international community towards a political and diplomatic strategy that puts the interests of Syrians first.

The only way to end the suffering of the Syrian people is a political solution and unified diplomatic strategy. The U.S. must urge fellow members of the United Nations Security Council to make the protection of civilians and accountability for violations of international humanitarian law their number one priority. And if the Trump administration truly cares about the fate of Syrian civilians, it can welcome more into the country.

“We share the world's outrage and horror at the unimaginable suffering Syrians have endured since 2011,” said IRC senior director of advocacy, Amanda Catanzano. “We urge the Trump administration to channel that outrage constructively and lead the international community towards a political and diplomatic strategy that puts the interests of Syrians first - rather than a continuation of the uncertain, disjointed and episodic response undertaken by the West for the last several years.”

Tell your Member of Congress to fight for refugee resettlement. Take action now.

Donate Now: Help the IRC provide vital aid to families in Syria, and in 40 countries around the world.

Help raise awareness of this humanitarian crisis and call for action by sharing our updates from Syria in your social media channels.

Isolated airstrikes won’t save Syria. Here is what Trump can do to help:

More on the facts & how you can help: https://t.co/FJztsa9j2f

Across Syria, the International Rescue Committee provides lifesaving support to 1 million people—almost half of them children—who are struggling to survive a brutal war now in its eighth year.  Learn more about our work.