A baby named Rescue: the miracle birth in beleaguered Yemen

An IRC mobile health team caring for uprooted families in a camp in Yemen was there at the right time to help a young mother through a difficult delivery.

“We didn’t have any money, or even water,” says Bodor Ali Muhammad Abdullah al-Jabri, remembering the day in November 2018 when she and her husband, Salem, scooped up their two little girls and fled their home near Hodeidah, the port city on the Red Sea in western Yemen. “The missiles were above us, the bullets were very close to us. We ran.”

The situation for families like Bodor and Salem’s is dire. Yemen’s five-year conflict has destroyed the nation’s economy, forcing 80 percent of the population to rely on humanitarian aid, even as that aid dries up. COVID-19 has sent food prices skyrocketing. Yemen’s already depleted health system is overwhelmed. 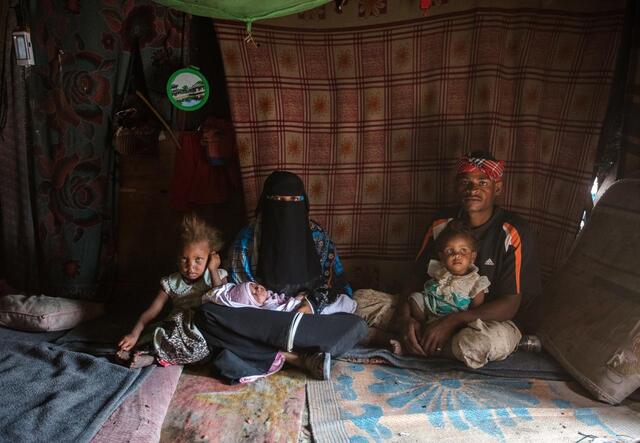 Bodor, 28, holding her baby daughter Enqath, sits with her husband and two children inside their tent.
Photo: Ameen Al-Ghabri/IRC

“We walked for about two hours,” recalls Bodor, 28, “and then we got in a car.” Rides from kind strangers took the family into the mountains to a displacement camp in Damt, once a tourist spot known for its hot springs.

But the fighting followed them to their refuge. Two months after their arrival in Damt, Bodor and Salem set out once again to find a safe haven. They headed to Quaatabah in southern Yemen, where they set up a tent and joined scores of other uprooted families camping on the outskirts of the town.

“We knew nobody here,” says Bodor, lamenting all they had left behind in Hodeidah. “Life was good before the war. My husband earned enough money to bring in all we needed.”

Salem, 33, a tailor, now gets up at 7am to look for work on nearby farms, while Bodor stays with the children and takes care of their home, washing the family’s clothes in old car tires converted to tubs. She collects the water from a communal tank. With the threat of COVID-19 ever-present in the crowded settlement, Bodor and Salem have taught Enad, age 5, and Haroof, age 2, how to wash their hands properly with soap and practice social distancing. 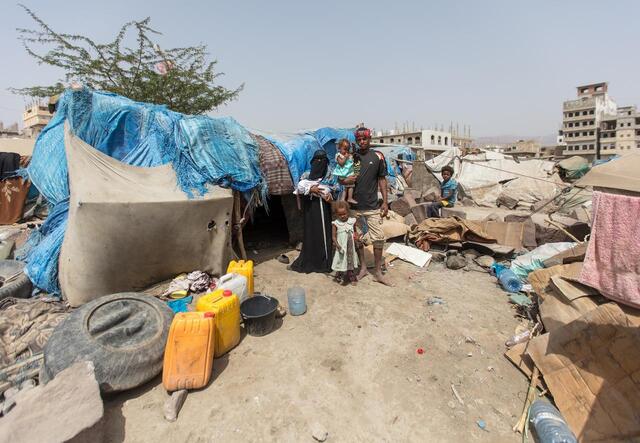 Bodor now lives with her family in a displacement camp in the Al Dhale'e region, after being driven from their homes by conflict.
Photo: Ameen Al-Ghabri/IRC

Somehow, Bodor and Salem remained optimistic despite their trials. “It makes me happy to see my children happy and healthy,” explains Salem. “And also it gives me satisfaction when all their basic needs of life are met.”

Like many women in Yemen, Bodor could not afford treatment at a hospital—or even the transportation to get to the rare functioning facility. Yet she knew the birth would be risky.

“I was anxious about running out of blood,” she says. “I am anemic.”

There was a solution, thankfully. The International Rescue Committee, active in Yemen since 2012, provides lifesaving emergency aid, medical care, clean water, education, and women’s protection to millions in the country. We also provide mobile health teams that travel to displacement camps and remote areas offering health care, including maternity services. 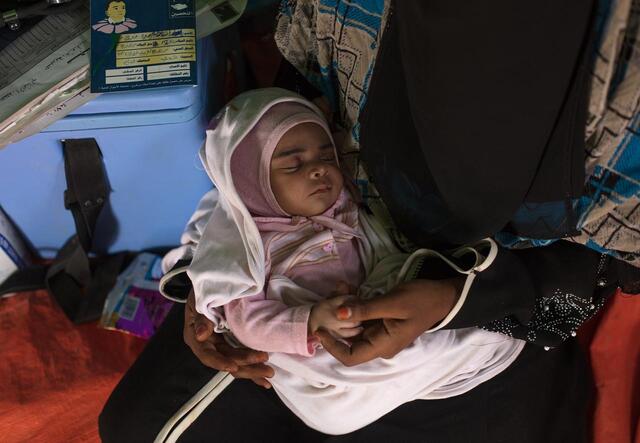 “Bodor couldn’t afford to go to the hospital, so we came to her,” says Samya Rasam Khaled, an IRC midwife working in Yemen. “During the labor, Bodor was exhausted, so we helped her.”

Bodor remembers her anxiety as the contractions started: she prayed she would give birth safely. “The IRC team came here and helped me,” she says. “They gave me injections and IV infusions that helped me give birth. I gave birth in this tent.” She lost blood as she feared, but getting proper care enabled her to regain her strength. She has fully recovered, and just as important, her third daughter arrived safely and remains healthy.

Says Bodor, holding the child in her arms, “We called the baby Enqath,” which means “Rescue” in Arabic, “after the organization's name—because it rescued us.”

An IRC mobile health team continues to check in on the family, following up with mother and baby and screening the other children for signs of malnutrition. 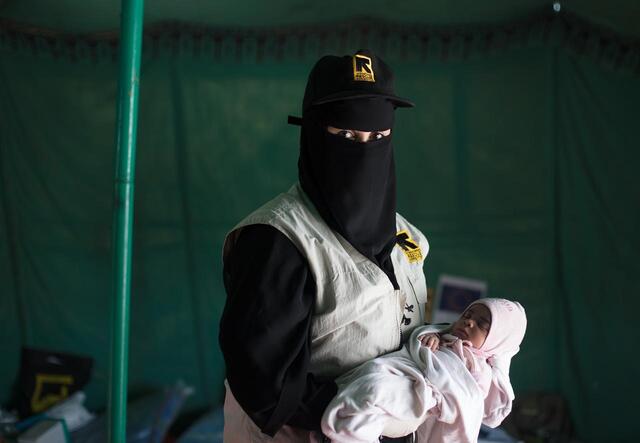 Bodor named her daughter Enqath meaning ‘rescue’ in Arabic, as a way of saying thank you to Samya and the IRC.
Photo: Ameen Al-Ghabri/IRC

Bodor and Salem are seeing their lives improve bit by bit—“We suffered a lot,” Bodor says, “and now it is better, thank God”—but they are understandably anxious about what lies ahead. In Yemen, four in five children, around 12.3 million, remain in urgent need of humanitarian aid. Enqath’s chances of going to school are slim; 7.8 million children can’t access any education in the country.

“Many children [of displaced families] do not go to school as they can’t afford it,” says midwife Samya. “I am also worried about diseases like COVID-19 and cholera. Many people have died of the cholera outbreak here in this camp.”

Adds Samya, “We want peace and I wish we could control the disease outbreaks. And I think women need to enjoy their rights. They suffer the most from life’s burdens.” 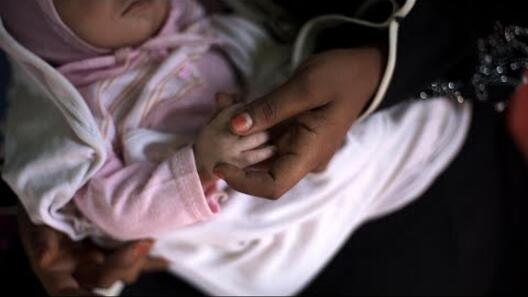 As the war continues and violence and airstrikes peak, COVID-19 is devastating an already vulnerable population. Humanitarian aid programs have collapsed due to a lack of funding.

“What we are seeing in Yemen is unlike any tragedy witnessed before," says Tamuna Sabadze, the IRC’s country director there. “COVID-19 is ripping through the country.”

The IRC is training heath workers, deploying mobile health teams and supporting health facilities with protective gear and proper water and sanitation services to fight COVID-19, even as we continue our other lifesaving programs.

The IRC's work funded by the European Union through the Civil Protection and Humanitarian Aid Operations department (ECHO) enables people to survive, recover and rebuild their lives.