Breaking down the stats as the U.S. plans to cut refugee arrivals to 30,000

It is no exaggeration that the future of the United States as a home for refugees is now on the line.

The administration will drastically reduce the number of refugees allowed to enter the country for resettlement in 2019 to 30,000—a 33 percent drop from last year’s record-low ceiling of 45,000.

The numbers are shocking:

The number of Muslim refugees entering the U.S. has plummeted by nearly 90 percent.

Only 3,129 refugees who identify as Muslim have entered the U.S. since October 2017. By comparison, the U.S. admitted 22,861 people identifying as Muslim from October 2016 to August 2017. Almost half of all refugees admitted last year were Muslim. The administration’s latest version of its travel ban, which went into effect in December 2017, institutes new vetting measures for refugees and restricts admission for people from Chad, Iran, Libya, Somalia, Syria, and Yemen.

Christian refugees arriving to the U.S. is down over 40 percent.

Since October 2017, 13,960 refugees who identify as Christian have been resettled to the U.S. By comparison, 23,876 people identifying as Christian were admitted during the same period last year.

“The administration’s intention means it has further reduced its promise to protect these vulnerable populations, backpedaling on promises to religious minorities, a commitment to leave no one behind who assisted U.S. troops, and on strategic goals in some of the most volatile regions in the world,” said Nazanin Ash, vice president of policy and advocacy at the International Rescue Committee.

The number of Syrian refugees who have been safely resettled in America has dropped by almost 100 percent.

As of October 2017, only 60 Syrian refugees have been resettled, compared to 6,509 during the same period last year. The war that has devastated Syria since 2011 is far from over. Fighting in Idlib—the last remaining area controlled by the opposition—may spark the worst humanitarian crisis in Syria since the start of the country’s seven-year civil war. 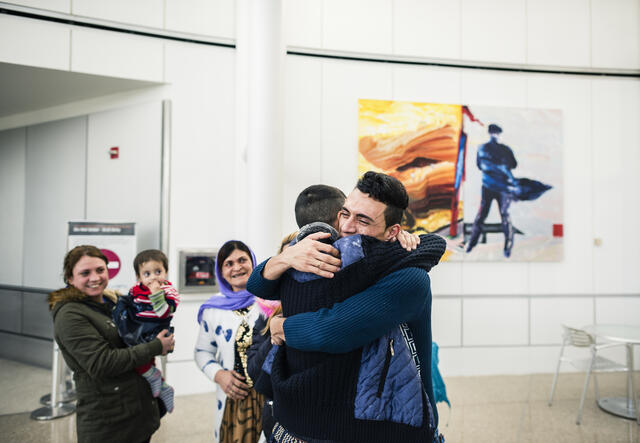 Adil Kheder Nimr, a Yazidi refugee, was reunited with his family on February 10. in Tukwila, Washington after they were banned from entering the U.S.
Photo: Nick Hall/IRC

The number of refugees from Iraq entering the country has dramatically decreased by 98 percent.

Just 130 Iraqi refugees have been resettled this year, in comparison to 6,740 during the same period last year. As of August 15, just 48 Iraqis—many who assisted U.S. missions in Iraq—were admitted to the U.S. compared to over 3,000 people last year. 100,000 were awaiting admission as of late July.

The battle to retake Mosul, Iraq’s second largest city, from ISIS forced more than one million people to flee. Although the terror group has been pushed out of most of the city, the suffering continues for those who endured harsh ISIS rule for two years.

Only five Yazidi refugees have been welcomed to America.

The Yazidi people are one of the many ethnic minority groups persecuted and violently targeted by ISIS in Iraq and Syria. In 2017, 445 Yazidi refugees were resettled in the U.S. – but only five have been welcomed in 2018.

“ISIS murders us," says Adil Kheder Nimr, a Yazidi refugee resettled by the IRC in Seattle last January. "They chopped off our heads, they did horrible things to our women, they killed children and destroyed our homes. They are still coming for us."

The administration’s intention means it has further reduced its promise to protect these vulnerable populations, backpedaling on promises to religious minorities, a commitment to leave no one behind who assisted U.S. troops, and on strategic goals in some of the most volatile regions in the world.

A record low for refugee arrivals

In all, the U.S. has admitted only 19,899 refugees since October 2017—less than half of the refugee admissions level set at 45,000. The administration’s plan to cut admissions by another 33 percent next year is a major blow for refugees even as global humanitarian needs grow.

Learn more about how you can stand for refugees.