Even through war, Syrian girl holds on to her dream of becoming a lawyer

With the International Rescue Committee's support, Nour, a Syrian refugee living in Jordan, was able to envision her future as a lawyer.

It is a bitterly cold January morning; we can see our breath in the car as the traffic of Amman gives way to foggy rolling desert. It is about 5:30am and we are headed to Zaatari refugee camp in northern Jordan. 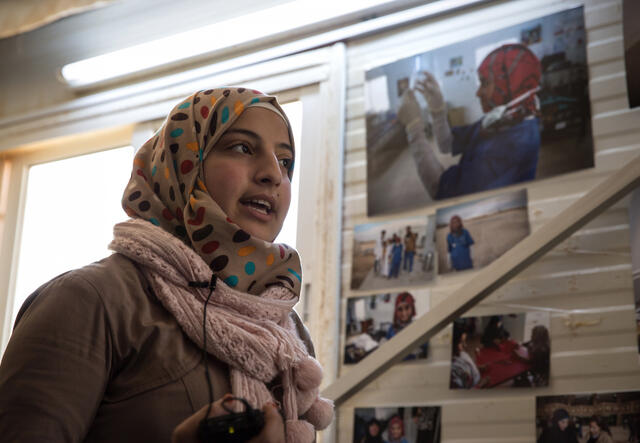 16-year-old Nour talks about her goal of becoming a lawyer in front of her peers after participating in the IRC's Vision not Victim program in Jordan. The program gives young girls the skills and support they need to build a better future for themselves.
Photo: Meredith Hutchison/IRC

For an hour there isn’t much to see—an occasional roadside shop, a few factories and refineries. We skirt the city of Mafraq, now home to tens of thousands of displaced Syrians living in one-room apartments, empty shops, anywhere they can find and afford space.

A few more miles on, the camp appears in the distance, caravans and white tents forming a gigantic grid on the sand. At the front of the camp there is a line of people—refugees waiting for the bus that will take them back to Syria because the conditions are so difficult here.

We pass through the first checkpoint manned by a Jordanian soldier; a tank sits to the side of the road with a few soldiers asleep on top. We drive through an olive grove to a second checkpoint, where a chatty soldier practices his English with me. He opens a tall black gate—there to keep out threats, as well as to keep in Syrians: throughout the camp are constant reminders that residents aren’t free to move about as they please—guards, barbed wire, more iron gates.

It has just snowed, so the ground is incredibly muddy. I pray the car won’t get stuck. Collapsed tents line the road. We turn the corner and arrive at the IRC’s women’s center, a group of caravans that serve as a safe space where women and girls can take classes, receive services, see counselors, or simply enjoy being together.

Outside the entrance, yawning but anxiously twisting her hands, Nour waits with her mother. I get out of the car with our program translator and greet them. Nour’s mother asks us about the plans for the day, kisses her daughter, and waves as we climb into the car and head back towards Amman.

A few years ago, Nour’s family fled Syria, among the three million who have left since the start of the civil war—navigating shelling and silent night truck rides over mountains, to seek safety in neighboring countries. Syrian refugees have experienced trauma and loss but Syrian girls face a disproportionate amount of harassment and exploitation, from early marriage to abuse in their own homes. Many are also denied access to education.

Despite such challenges, Nour is an audacious 16 year old, remarkable for her courage and tenacity, and because she refuses to allow hardship to define who she is. Yet Nour is one of hundreds of thousands of Syrian girls who have witnessed the atrocities of war but continue to hold on to their visions for the future. These young women have begun to demand a space where their voices and ideas can be heard.

I met Nour several months earlier in mid-October. She had signed up to participate in a program I run with the International Rescue Committee called Vision not Victim. The initiative uses creative media and activities to support girls in building the skills they will need to keep themselves safe and pursue their goals.

I want to fight for what is right. I don’t like injustices, or violence, any sort of violence...

Over the next weeks, I witnessed Nour come out of her shell and become a leader of her group. She was observant, always asking questions. If other girls were having trouble, Nour was at their sides. When female leaders from the community came to speak, Nour probed them about their struggles, their choices, their strategies for overcoming stereotypes about women.

Nour wanted to understand all this because she had decided she would study the law, a career her mother had encouraged since she was a child. Now, coming into her own in our group, she shared with us the vision she had for her life.

“When I was younger, my mother told me I’m very courageous and truthful,” Nour recalled. “I want to fight for what is right. I don’t like injustices, or violence, any sort of violence, whoever does harm to me I won’t return it—I am against violence. I like justice.” 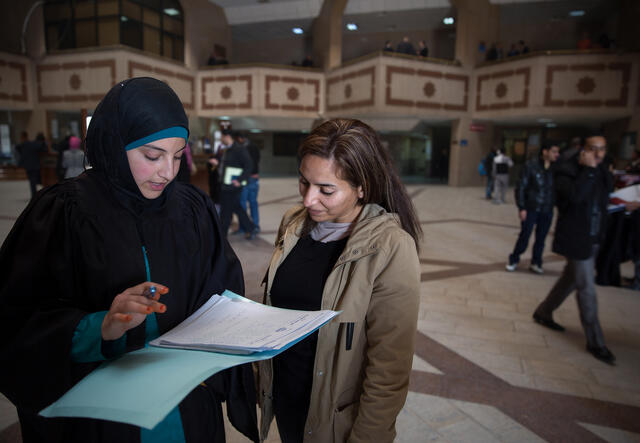 Nour, left, explains elements of a case to her “client” at a photo shoot in the main courthouse in Jordan’s capital, Amman. Lawyer and IRC staff member Leila Al­-Zghoul plays the role of the client.
Photo: Meredith Hutchison/IRC

A moment of inspiration

The main courthouse of Jordan is a polygonal building in Amman, an imposing structure with a vaulted three-story atrium crowned with a sunlit skylight. Staircases sweep off in all directions. A thin but ever-present layer of smoke hangs in the air as lawyers talk about their cases, file paperwork, meet clients. They are easy to spot, the lawyers, draped in black robes with yellow stripes, scurrying about with thick folders under their arms.

As Nour steps into the atrium, she dons her own black and yellow robe, rolling her shoulders to slip her arms through the sleeves. Suddenly she is standing straighter, holding her head a little higher. Our guide, a passionate IRC program manager named Leila, herself a lawyer, approaches, and we begin our tour.

A lot of people say there is freedom of speech for women and many people talk a lot about freedom in general—it doesn’t really exist. I want to work on changing that, on empowering women to speak up in our society where men are those who make decisions at home.

For the rest of the day, we wander in and out of courtrooms, watch litigations, learn about the legal process. Nour speaks with female lawyers and judges, talking about the law and its role in protecting and promoting the equality of women. She absorbs their advice, hanging on to every word, and surprises them with incisive questions.

As the afternoon winds down, we pause in the atrium. A key aspect of Vision not Victim has girls design and direct a photo shoot where they pose as their future selves. These shoots are done in real locations, so girls can interact with professionals in their envisioned fields.

Nour has decided she wants to be portrayed in her robe, standing in the center of the courthouse. She poses proudly as people stride around her, then begin to gather to watch. Nour is not miming a part; she is not pretending; she is completely and utterly herself and confidently trying on her future.

As we drive back to the camp, Nour is quiet, her robe now folded on her lap. I ask her what she is thinking about, and she replies that she is replaying the day in her mind, trying to hold on to all the details, so that when she faces struggles in the future, she would have this moment of inspiration to drive her forward.

“A lot of people say there is freedom of speech for women and many people talk a lot about freedom in general—it doesn’t really exist,” Nour said. “I want to work on changing that, on empowering women to speak up in our society where men are those who make decisions at home. I want women to be able to speak up without being afraid, say their opinions, make their own decisions.”