Since 2012, clashes between Buddhists and minority Muslims in Myanmar’s Rakhine state have forced hundreds of thousands of people from their homes. Nearly 100,000 are still living in camps on the outskirts of Sittwe, the state capital. The majority of displaced people are Muslims who call themselves Rohingya.

The latest outbreak of violence, which followed deadly attacks by militants on police stations on Aug. 25, 2017, has left scores dead and continues to push thousands into neighboring Bangladesh each day. More than 615,000 Rohingya have fled across the border since late August. The New York Times reported that less than one-third of the 1.1 million Rohingya who lived in Myanmar last year are thought to remain in the country.

The International Rescue Committee (IRC) and other aid organizations strongly condemned the violence, but humanitarian agencies were barred access to the region, leaving people living there extremely vulnerable. Rakhine is the world’s fastest growing humanitarian crisis, comparable to the Rwandan genocide. 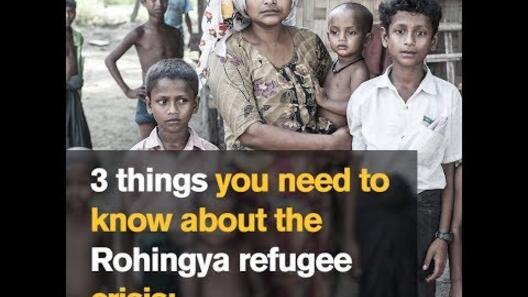 As one of the largest health care providers in Rakhine—the IRC began work in Myanmar in 2008 in response to Cyclone Nargis—we are ready to scale up our emergency response, including lifesaving primary and reproductive health care, clean water and sanitation services, and the protection of women and girls. Meanwhile, we are working in Bangladesh to help 800,000 displaced Rohingya, a number we anticipate will increase as the violence rages on.

Here are the stories of three Rohingya IRC community health workers, who work and continue to live in desperate conditions in Rakhine’s camps, as told in their own words (edited for clarity and space). Due to the surveillance and intimidation they face living in a conflict zone we have taken steps to protect their identities.

Thiri Hla Ming, an IRC community health worker,  provides primary health care and education for patients in a camp near Sittwe, the capital of Rakhine.

We all want to go back to our villages.

When humanitarian agencies are able to come, we are OK, and can survive off what they give us. But after Aug. 25, nobody came, and health emergencies began arising.

Six women in my area in the camp gave birth during one week alone. Two of them suffered complicated pregnancies. Because we were cut off from help and could not call an ambulance or go to a hospital, one baby was a stillborn, and one survived only a few minutes before dying in front of us.

After the August attacks, we had no rations for a month. People were eating rice with salt or oil. We shared as much food as we could, but we felt afraid—we didn’t contact agencies to ask for support. We couldn’t do anything but wait. Humanitarian agencies have started providing food again, but we have fewer food rations than before the attacks.

We all want to go back to our villages. The weather is hot. We live with seven or eight family members in one small hut. According to our religion, men and women can’t share space like this, even if we are siblings. Now we have to, and as a woman, I don’t want it.

Our lives in the camps changed on Aug. 25. We had no assistance from any outside organization for one month. People who fished couldn’t go out because they feared attack. The government expanded checkpoints everywhere. They not only asked questions, they sometimes beat people.

Everyone in the camps, including myself, had no income. For the whole month of September there was no food assistance or medical supplies, so people had to share their food or borrow from others, and skip meals as well. Although we now receive supplies from some organizations, we don’t have support like before..

People are scared. Before, if we had big medical problems like hepatitis C or a need for a C-section, we could go to Bangladesh. Now, we dare not. Women face domestic violence, as well as sexual harassment when they go to the toilet at night because there is no light. For girls, early marriage is seen as a protection. Parents want their girls to have someone to care for them and protect them from rapes from people inside the camp, and from outside people who come into the camp. We have so many concerns—education, clean water, so many other things.

Zaw Naing, an IRC community health worker, lives in one of the few Muslim villages surviving in Rathedaung in northern Rakhine.

We were starving ... I was afraid many of us would die.

From Aug. 25, for two months, no agencies came to help. We were starving. We survived off of the food we had saved from past distributions, trading among ourselves and doing whatever we could. The one small shop in town that carried medicine was out of stock. I was afraid many of us would die.

We contacted humanitarian agencies, but we they replied that they didn’t have permission to visit us. They said they were trying their best. Now the World Food Programme and the International Committee of the Red Cross have again been able to provide food in the village—rice, oil, sardines, tea and the like. But we hear that there are problems in Northern Rakhine and people are fleeing. We also heard that Bangladesh and Myanmar are discussing sending Muslims back to Rakhine.

People in my village are asking, “What will become of us? What will happen next to us?” 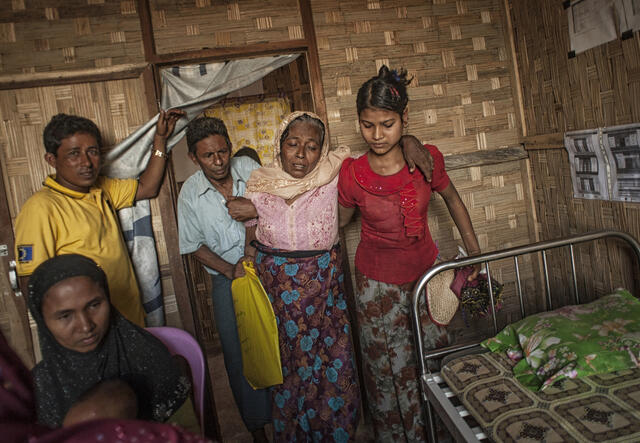 In order to deliver lifesaving services, aid workers must be allowed to move freely and safely to communities affected by conflict. The IRC’s work in Myanmar is more crucial than ever. We pledge to put the needs of the most vulnerable—women, children and the elderly—at the forefront of our efforts, and to achieve measurable improvements in decision-making power, safety and health.

*All names have been changed for the aid workers’ protection

Donate Now. Your support today will help the IRC as we assist families in Myanmar, Bangladesh and more than 40 countries around the world.