Ethnic conflict is raging in Myanmar’s northern Rakhine state. In 2012 many members of the minority Muslim community in Rakhine, including Rohingya, were attacked and their villages destroyed, forcing them to shelter in camps. The latest outbreak of violence on Aug. 25 killed at least 6,700 people and pushed hundreds of thousands of Muslims into neighboring Bangladesh, creating the world’s fastest growing humanitarian crisis.

The International Rescue Committee is assisting all communities affected by the crisis in Rakhine. We have regained access to camps and villages across the state, where we are providing health care and women’s protection and empowerment programs.

We recently interviewed several Sittwe camp residents about health conditions and violence against women in the crowded camps. For their protection, we are not providing their photos or real names.

Daw Phyu Ma remembers fleeing her home in June 2012 like it was yesterday.

I had to leave my disabled daughter behind. I cried every step of the way.

“I had to leave my disabled daughter behind,” she says. “I cried every step of the way.” Widowed in 2011, this mother of four had no one to help carry her adult daughter.

After five hours of walking, Phyu Ma and her children arrived at a camp in the dark. They were ushered to a “temporary” one-room hut.

Phyu Ma asked every person she met if anyone had seen her disabled daughter. One month later her daughter was found in another camp. Her hands were tied together and, unable to eat, she had become excruciatingly thin. Without any ability to speak, her daughter used sign language to say “sad” as she described her pain.

Almost six years later, Phyu Ma and her children are still living in the one-room hut and waiting for any sign that they can return home.

Many women live in fear, knowing that security guards at the camp may not be able to protect them if Rakhine mobs invade.

We do not feel safe here.

“We do not feel safe here,” says Myo Zaw. “The government cannot guarantee there will be no violence or terrorism here. I have even seen children and adults shot. It might happen again.”

Discrimination already impacts every aspect of this woman’s life. Even though she identifies as Kaman, a legal ethnicity recognized in Myanmar, she is denied citizenship because she has ancestor who married a Muslim who identifies as Rohingya.

“Discrimination renders us powerless and fearful as a minority group,” she says. We are accused of being migrants yet we have evidence that my family have been living in Myanmar for many generations.”

Many women live in fear in the Sittwe camps, knowing that the security guards may not be able to protect them if they are attacked.
Photo: IRC

U Maung Hla, 57, is a former businessman who was forced to leave his home, his construction business and a plot of land full of fruit trees that he had saved all his life to buy.

There is no guarantee that anything will ever be our own again.

“It is not possible to own land again,” he says. “My family’s only future is to live in a settlement and shelter arranged by the government, but there is no guarantee that anything will ever be our own again.”

Maung Hla is also struggling to care for his brother, who had a stroke after being prescribed the wrong medicine. He doesn’t know if he can take him to Sittwe hospital because it is run by the Rakhine community.

“If we go to Sittwe Hospital, most patients die. Is this intended? Is it real or is it a rumor?” he wonders. “We are afraid to go there. We have lost trust.”

“Living here is like being a chicken in a cage,” says 19-year-old Mar Lar of her Sittwe camp. “We have no freedom of movement and no privacy. There is no place to feel happy.”

Living here is like being a chicken in a cage.

Safety and security, especially at night is Mar Lar’s greatest worry. Women have to walk through a field in the dark in order to use the latrine.

“It is not safe for women and girls to go to the toilet alone at night,” she says. “Some men drink and use drugs around the latrine, because there is no electricity. It is a very dark place for men to gather.”

To learn how to keep herself safe, Mar Lar joined an IRC women’s group.

“The girls in my group help each other,” she says. “We always accompany each other to the toilet and we offer mutual support.” 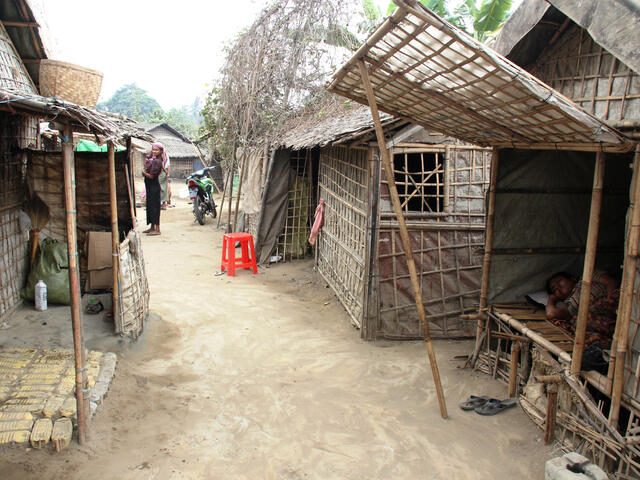 The IRC is responding to dire health conditions and widespread violence against women in the crowded camps in Sittwe.
Photo: IRC

Maung Maung, 19, has already seen too much violence.

We thought our move was temporary.

When Rakhine came to his community, they burned homes and threw firebombs. “Many people were elderly, injured, sick and disabled,” he says. “Those who couldn’t walk were carried in longyis (long skirts) on the backs of relatives.”

Unable to assist then, Maung Maung wants to assist now. He joined the IRC program to address violence against women and girls. He helps fellow refugees by sharing his newly learned communications skills, and his understanding of ways to change violent behavior.

Still, he knows he will never return to the life he once had.

“My family had been living here for seven generations, but all our documentation was left,” he says. “We thought our move was temporary and the government would return us to our original place.”

A long road ahead

Hundreds of thousands of Rohingya continue to face enormous humanitarian need—whether trapped in Rakhine state with scarce assistance or as refugees in Bangladesh with unclear prospects. It’s a crisis that won't end unless Muslim minorities' rights are recognized and protected in Myanmar.