Five years on, a displaced Iraqi woman rebuilds her life

It’s been five years since the conflict with the ISIS group was officially declared over in Iraq. But that doesn’t mean people automatically went back to the lives they had before. An estimated 1.2 million people remain internally displaced and nearly 5 million people in the country lack livelihood opportunities, proper shelter, or access to basic services.

The International Rescue Committee wants to take a moment to honor all of the displaced Iraqi women who have been disproportionately affected by war and have shown incredible courage in the face of immense hardships.

Sarah was uprooted not once, but three times during the conflict. Her world was turned upside down when ISIS captured her husband in 2017.

“I felt like this is the end of life, there was no hope,” Sarah says.

Losing her husband also meant losing the ability to support her four children. With their home no longer a safe place, Sarah and her family were forced to a displacement camp.

It was there, in the camp, where Sarah first learned about the IRC’s women’s protection and empowerment program. 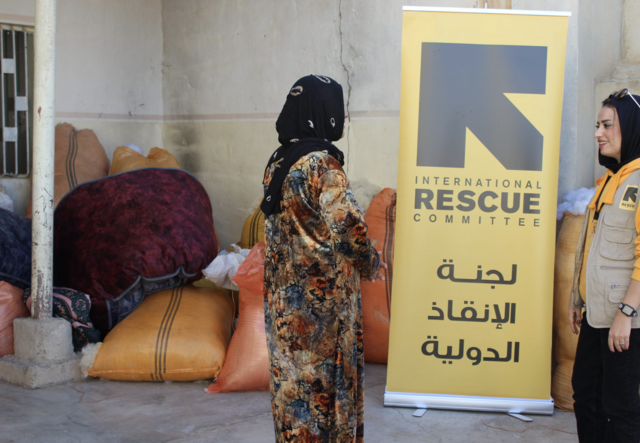 Sarah (left), her identity obscured for privacy, has built up her sewing and upholstery business in Iraq with support from the IRC.
Photo: IRC

Before the conflict, Sarah worked as a seamstress. Through the program, she learned how to turn her sewing skills into a viable business. Within three months, she was producing enough upholstery and linens to earn a living income.

In addition, Sarah benefited from the emotional support that came from participating in communal and recreational activities with women like herself. She began training other women in sewing and handicrafts so that they could support themselves and their families as well.

Unfortunately, the camp where Sarah lived closed seven months after they arrived. She moved her family to another camp close to the market where she sold her wares, but she was now unable to access the materials she needed to keep her business going.

But she knew exactly where to turn when she discovered another IRC women’s protection and empowerment program at the new camp. Sarah rebuilt her business and supported her family for the next year until that camp also closed.

Reunited with her husband

“[It felt like] life started again,” Sarah says, recalling how they planned to return home together. Unfortunately, when they arrived home, they found someone affiliated with an armed group occupying it, forcing them to rent accommodations that strained their budget. It took the entire family working together to earn enough to regain their home—with the help of a lawyer—but Sarah’s business income was not enough to cover the cost of her children’s schooling. 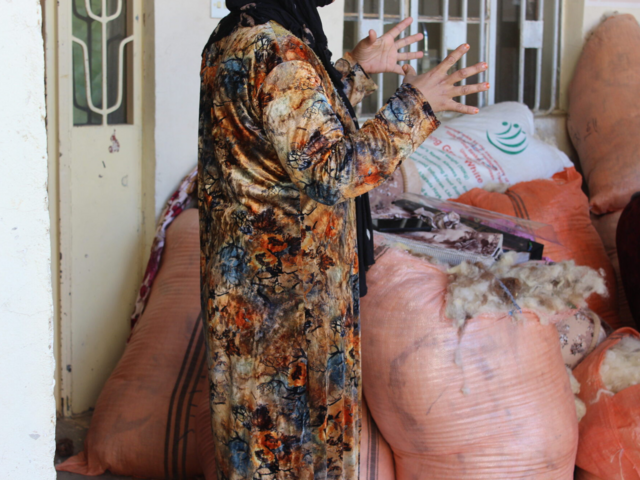 Sarah’s business supports not just her own family but the families of the five women employed in her workshop.
Photo: IRC

If there’s anything we’ve learned from Sarah, it’s the power of perseverance. For the third time, Sarah found a women’s protection and empowerment program through an IRC partner that helped her build her most successful business yet.

At the beginning of 2022, Sarah visited the IRC women’s protection and empowerment center seeking financial support and hoping to meet women with similar experiences. She joined in sewing activities and emotional support groups and was referred to an IRC economic recovery and development team that provided her with a small-business grant. 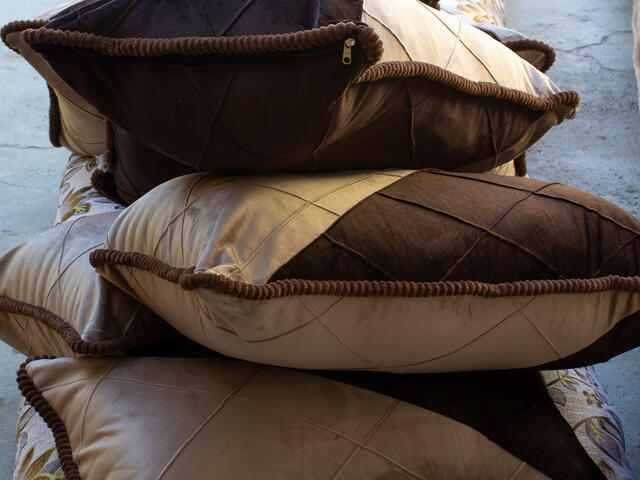 Pillows created by Sarah and her team at their workshop, which she calls the “hope workshop.”
Photo: IRC

With this grant, she purchased new equipment, materials, and opened a shop inside her home. Her work became so well known, people traveled from nearby towns to purchase her crafts. Business boomed—Sarah had to move to a bigger workshop and hire five women to help fill client orders.

Today, Sarah’s business supports not just her own family but the families of the five women employed in her workshop, which she lovingly named her “hope workshop.” Now Sarah boasts of a three-month long waitlist for orders.

Dreams for the future

Sarah works with IRC local partner Iraqi Al Amal to support women going through the same training she did during those years of recovery. She dreams of opening a factory where “hundreds of women can work and support each other,” and says she wants to “make it a safe space like the center I used to attend.” She told the IRC that her personal experiences with support networks continues to inspire her.

Women’s protection and empowerment programs help women like Sarah find the courage and strength to overcome hardships. They help them live free from violence and achieve equality and respect in their communities.

One by one, women who participate in the IRC’s women’s protection and empowerment programs are rebuilding their lives while building a courageous new community of women unafraid to improve the world around them.

* To protect Sarah’s identity we have used a pseudonym.