The hands that make a home

Six inspiring newcomers to Uganda's capital city—all of them newly minted entrepreneurs—share how local mentors have welcomed them and supported their dreams.

Meet Shakira, Julia, Nelson, Jamila, Suzan and Bijou—six people who are rebuilding their lives in Uganda, a country that hosts more than 1.2 million refugees.

As newcomers to the bustling city of Kampala, they initially had trouble finding job opportunities. Then they learned about an International Rescue Committee (IRC) project that would place them in four-month mentorships with local Ugandan business owners. The initiative, called the Financial Integration in Displacement (FIND) Project, is a partnership with Tufts University and the Open Society Foundations that helps refugees and migrants overcome barriers to financial stability.

In these images, taken by renowned documentary photographer Nichole Sobecki, you’ll see their hands at work as they are trained by their mentors in a trade that will allow them to one day thrive while running their own businesses. But look more closely and you’ll notice something else: a new community being woven together. 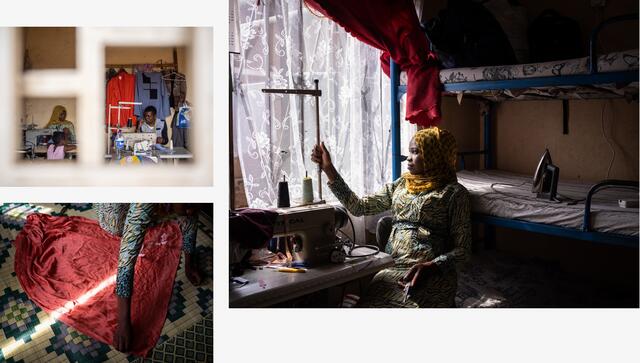 Shakira, 32, came to Kampala on one of the happiest days of her life: her wedding day.

She left her home in western Uganda to marry a man who worked in the city. The busy streets filled with cars and strangers were a big change from the beautiful mountains and lakes that surrounded her back home.

As she began to dream about what her life in this new city would look like, her father’s tailoring business came to mind.

Shakira frequently passed a tailor’s shop where she’d stop to admire how organized and well stocked it was with sewing materials, fabrics and equipment. When the FIND project offered to sponsor her in a mentorship, she knew exactly who she wanted to ask to help her build her own career.

Christopher Bongababa, the owner of that shop and a refugee from the Democratic Republic of Congo, taught her how to run a tailoring business, including what kind of inventory to keep in stock so that she would be prepared to tackle any project that walked through the door.

Now, she’s ready to open her own business. She dreams of using her love for sewing clothes and vibrant colors to help people dress up to celebrate life’s milestones. 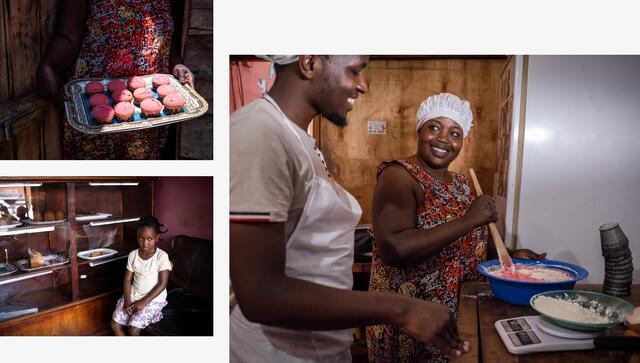 Julia, 42, was forced to flee her home in Juba, South Sudan, when violence in the neighborhood threatened her family’s lives. One of her neighbors offered to help Julia, her husband and her five children escape to Kampala. There, the family found a home in a cluster of buildings around a courtyard, where their new Ugandan and South Sudanese neighbors shared meals together.

A neighbor, a Ugandan woman, invited Julia to learn how to make simple baked goods with her to help her pass the time and brighten her mood.

This neighbor then introduced Julia to the IRC’s FIND project, where she was paired with a young Ugandan baker named Joshua Tumwebaze. Not only did he teach her how to make cream cakes, cakes, and cookies, he also taught her successful business principles, like diversifying her inventory and not focusing on only one type of baked good.;

While the mentorship ended, their newfound friendship did not. Joshua told Julia she was welcome at his bakery anytime, and that he would support her in her new business every step of the way. 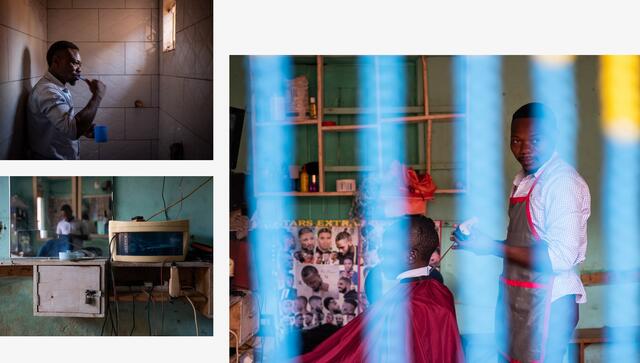 Nelson, 24, fled his home in the Democratic Republic of Congo after his uncle was killed and his entire family was threatened.

When Nelson arrived in Kampala, he knew that he needed to learn English and find a job. Having had some experience cutting hair in Congo, he used what little money he had – not to buy new clothes or a cell phone – but to buy a pair of hair clippers.

The most important thing Nabaasa taught me was that I should never give up.

With clippers in hand, he went door to door asking people if they would like their hair cut. As he started to earn some money, he dreamt of opening his own hair salon in Kampala.

After learning about the FIND Project, Nelson was paired with Nabaasa Allen, a mentor who could teach him about more than just cutting hair.

She taught Nelson how to do all kinds of plaiting—from braids to weaves to cornrows—but she also taught him to look at every perceived failure as an opportunity to become a better barber and stylist.

He can’t wait to take what he’s learned from Nabaasa to bring joy to clients in his own barbershop. 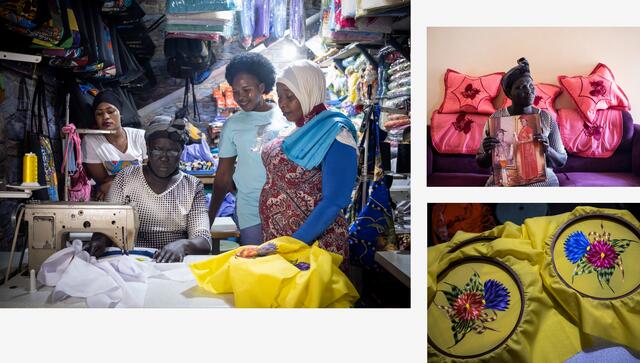 Jamila, 42, is from Bor, South Sudan. After South Sudan seceded from Sudan, there was no food or water and her hometown was dangerous because armed groups were fighting each other.

Jamila and her nine children, aged four to 26, fled toward the Ugandan border to escape the violence. They joined her sister who was already living in Kampala.

I’m now very happy because I had nothing, but now, I have strength, and I have something to do.

When Jamila arrived in the city she didn’t have any business skills and it was very difficult to pay rent and her children’s school fees.

Salimah owned a shop that sold traditional embroidered items. Salimah agreed to be Jamila’s mentor and spared no effort in teaching her everything that she wanted to learn. 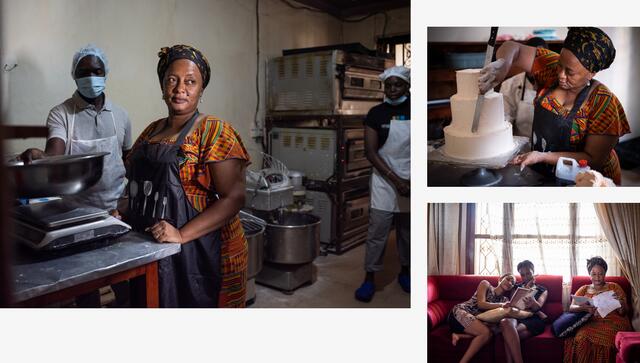 Suzan is a 43-year-old mother of six who was forced to flee her home in South Sudan when war upended their lives. In her search for safety, she brought her family to Kampala.

Faced with the challenge of navigating a new country in an unfamiliar language, she wondered how she could support her family. She prayed for someone to come along who could teach her a way. And then she met 25-year-old Michael Sekalala.

Michael doesn’t differentiate between Ugandans and refugees. He treats them equally.

Her first encounter with Michael was in his own bakery, Joy Bakery. She used to buy bread for her family there and found herself enjoying watching the people behind the counter mixing, kneading and rolling dough.

When Suzan got involved with the FIND Project, she was excited for Michael to be her mentor. Michael was not only a talented baker and entrepreneur, he was sympathetic to Suzan’s experience because his wife, Joy, was also a refugee from South Sudan.

The first thing Suzan told him when their mentorship started was that she wanted to learn everything. Cookies, cakes, cupcakes, bread, icing, decorating. She wanted to master it all.

She can’t wait to open her own bakery one day. When she does, she wants to train other aspiring bakers, the way Michael taught her. 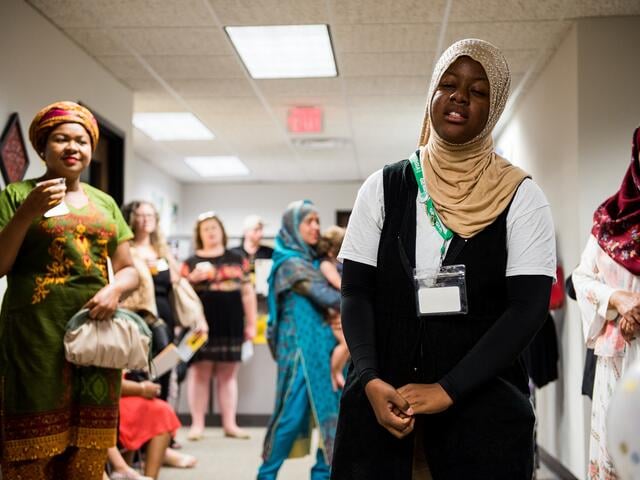 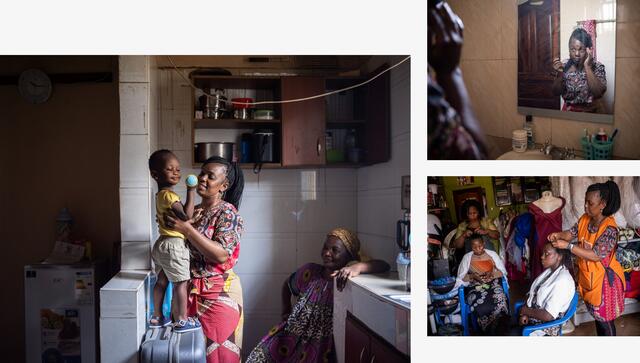 Bijou, 40, came from a beautiful town called Beni in Democratic Republic of Congo, where she was a pediatric nurse.

Her family had to leave Beni because armed men beat up and kidnapped her husband. She found him and treated his injuries but knew they could never go back home. They had their neighbors send their children to be with them in Uganda.

Rehema is someone whose heart is willing. She loves to help.

While Bijou had been in nurse in Congo, she wanted to find a job that was more flexible and less demanding in Kampala. Ideally, she wanted to be able to work with her hands.

Through the FIND program she was paired with mentor Rehema Kanyarusoke, owner of a hair salon. Bijou is learning to braid and style hair in hopes of one day opening her own business.

Bijou says that Rehema has taught her a lot about life, and especially about the importance of earning and saving money. She is working hard to save money for her five daughters’ education.

Nichole Sobecki’s photos of Nelson, Suzan, Julia, Shakira and their mentors are featured in the IRC’s exhibition, “The Hands That Make a Home,” at the Photoville Festival in New York City (June 4-24).

Through her documentary photography, Nichole Sobecki brings attention to humanity’s unbreakable connection to one another and the natural world. Born in New York, she has lived in Nairobi for the past decade. Nichole’s photography has been recognized by the ASME Award, Robert F. Kennedy Human Rights prize, the Leica Oskar Barnack Award, and Pictures of the Year, among others. Nichole is represented internationally by the photo agency VII, and is a member of Women Photograph and Everyday Africa.

About the IRC’s work

The International Rescue Committee helps people whose lives and livelihoods are shattered by conflict and disaster to survive, recover and regain control of their future. During and after crises, people may be forced to make short-term decisions to survive—such as pulling children out of school to work—that will have long-term negative consequences. Through cash assistance and programs like the FIND initiative in Uganda the IRC helps them meet immediate needs and build a brighter future.