Healing herself by helping others

Volunteering at an International Rescue Committee-run clinic in Jordan has given this Syrian mother hope to aspire for a better future.

Amira,* 37, didn’t want her children to think this was how they had always lived: as refugees in an unfurnished apartment with decaying walls, sleeping on thin mattresses and struggling to survive on $84 a month from food vouchers.

“When we were back in Syria, we had a good life,” she says. “We were living in luxury. I don’t want my children to feel like we’re missing anything in our lives now.”

Four years ago, Amira and her family fled to the city of Mafraq in northern Jordan when the Syrian civil war spilled onto the streets of their hometown, Dara’a.

Starting anew was not easy for the family. She had left behind a career as a nurse, and her husband had worked as a police officer.

“I used to live in a good community,” she says. “Everyone was always supportive of each other—the neighbors loved me and I loved them back. We left everything behind: our jobs, our house with everything inside. It was a beautiful house.” 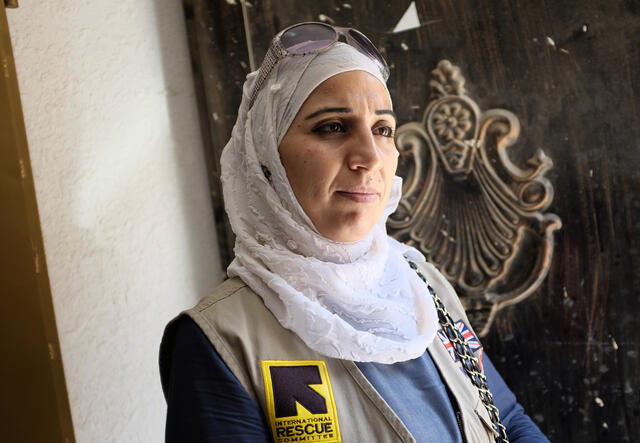 37-year-old Amira volunteers at a health clinic run by the IRC in northern Jordan where she and her family have found safety after fleeing from Syria.
Photo: Timea Fauszt /IRC

Not one to sit around idly, Amira searched for an opportunity to contribute to her new community. But finding a job in Jordan proved to be impossible—there are high restrictions on work permits for refugees.

“I have a university degree,” she says. “I feel like I’m valuable when I go out and work.”

When Amira fell ill, a neighbor insisted she visit a free health clinic run by the International Rescue Committee (IRC). It was there that she found the inspiration to rebuild her life.

The clinic, one of four in Jordan that collectively have treated 200,000 people, has become a lifeline for people like Amira. More than 80 percent of the 630,000 registered Syrian refugees in Jordan live outside of formal refugee camps, making it difficult for them to access health care and other basic services. The IRC clinic provides critical primary and reproductive services to an average of 150 urban refugees every day, as well as prescriptions and lab tests.

Soon after her first visit, Amira began to volunteer at the clinic, where she now volunteers in return for a small stipend. As a trained nurse, she prepares patient files and helps visitors identify the documents they need for treatment. Her fellow refugees always thank Amira and her colleagues for their hard work. 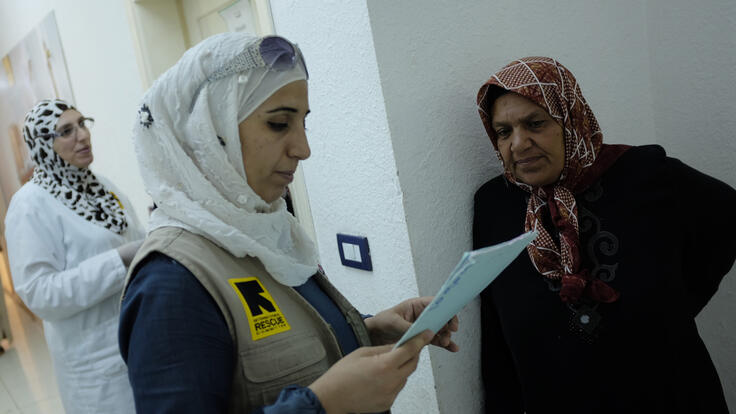 Amira speaks to patients at the Mafraq health clinic that provides critical services to refugees and other vulnerable people. Photo: Timea Fauszt/IRC 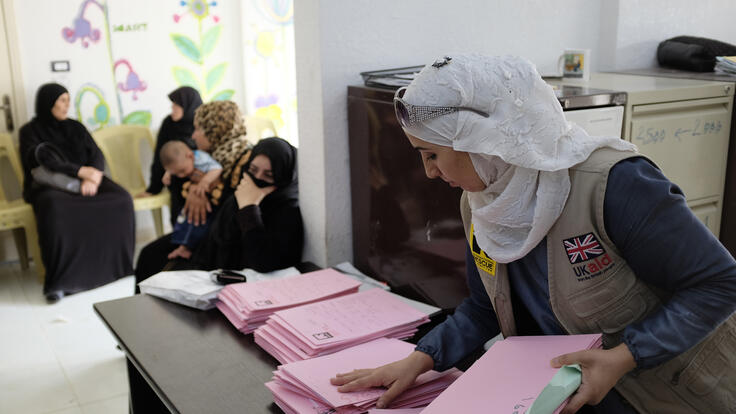 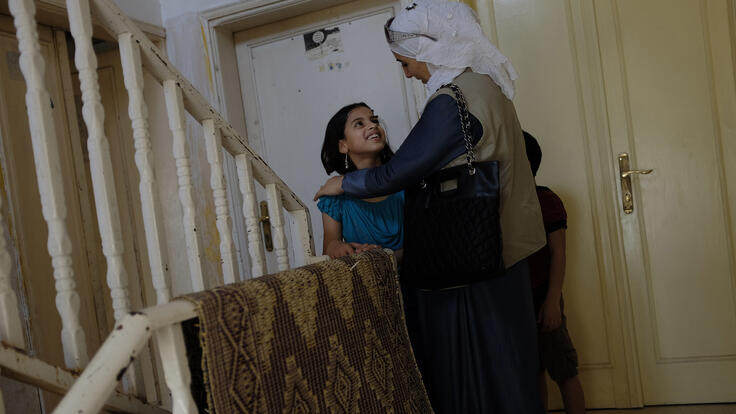 After a tiring, yet rewarding day at work, Amira returns home and is greeted by her smiling 10-year-old daughter Bilal and her youngest child Mohammad. Photo: Timea Fauszt/IRC 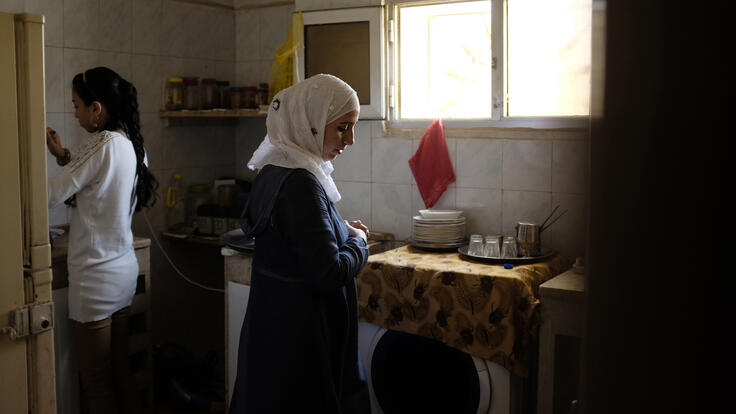 Amira enjoys cooking with her children. She made a simple dish with white rice and a hot yogurt sauce, ingredients she purchased with food vouchers she receives from other aid agencies. Photo: Timea Fauszt/IRC 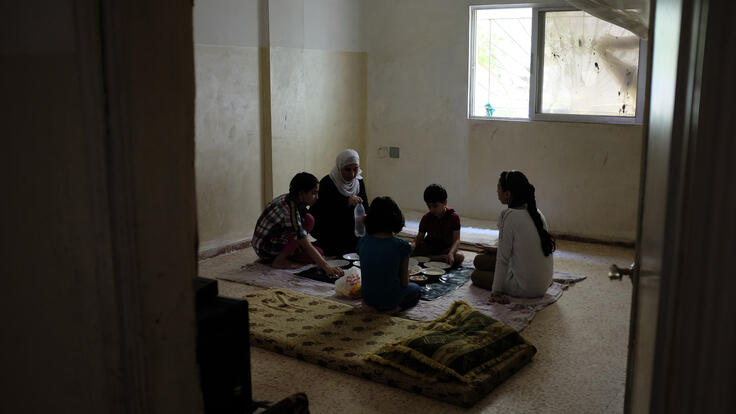 Amira and her four children sit together on the beige tiled floor in their apartment for a late lunch. The children eagerly share stories about their day at school. Photo: Timea Fauszt/IRC 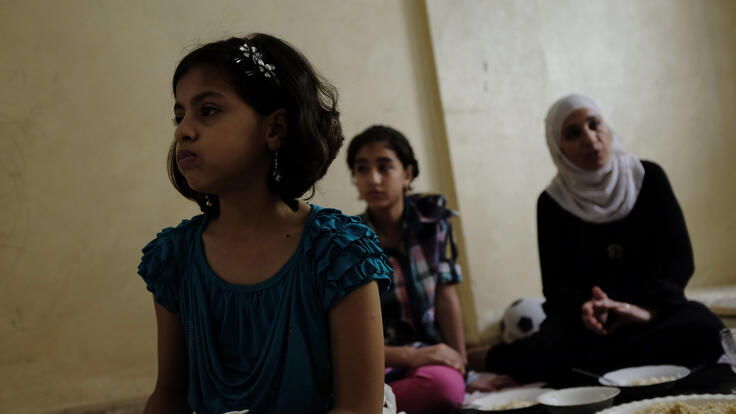 10-year-old Bilal enjoys her lunch with her family while she watches cartoons on a small television.  Photo: Timea Fauszt/IRC 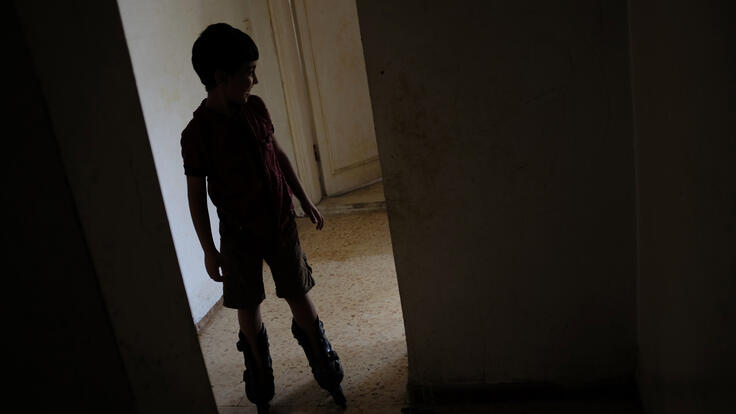 “I find their words very motivating,” she says, “and it helps me realize that what the IRC and I are doing is making a difference in people’s lives.”

Amira does not deny that her volunteering duties are demanding, but it brings her joy as well.

“It’s a tiring position, but it’s worth it,” she says. “I feel so much better emotionally and psychologically.”

But after a long day at the clinic, Amira is happy to return home to her family, her motivation.

When we were back in Syria, we had a good life. We were living in luxury. I don’t want my children to feel like we’re missing anything in our lives now.

“I’ve always had my career and home balanced since our days in Syria,” she explains. She and her husband have slowly forged a new life, a slice of normalcy, creating a loving environment for their children despite living as exiles. They cook together and sit down for evening meals with their children, who share stories about their day at school.

Volunteering at the clinic has given Amira hope to aspire for a better future in Jordan.

“If the war in Syria ends, yes, we’ll think about going back, but for now, we have settled here in Jordan,” she says. “I want to enhance our lives here. I want to keep volunteering. I want to give my children a good life and an education.”

The IRC’s health program in Jordan is supported by aid from the U.K. government and other generous donors.